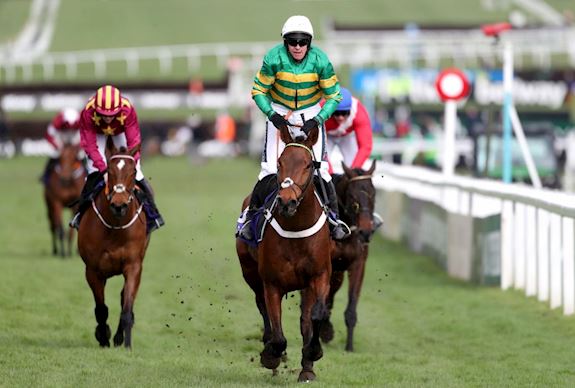 The Nicky Henderson-trained Champ flew up the hill to catch Minella Indo and 5/2 favourite Allaho just before the line in the G1 RSA Insurance Novices' Chase, giving the trainer a record 67th winner at The Festival. It was Henderson's third at the 2020 meeting.

Ridden by Barry Geraghty and owned by J P McManus - for whom it was a 61st Festival triumph - Champ was named after former multiple champion jockey Sir A P McCoy. The King's Theatre eight-year-old was sent off at odds of 4/1, and won by a length from Minella Indo.

Henderson said: "I thought we had come an honourable third and that was it, and had actually turned to see what was happening up the front - I don't know where he came from! I was actually stood behind Cheveley Park's [racing manager] Chris Richardson and thought we had finished third to them. Suddenly Champ came into my sights. I thought, 'what's he doing here and how has he got here?'

"He's a horse with a wonderful temperament and attitude, and to be fair his fall [at Cheltenham on January 1] didn't do that much damage. It was a horrible fall though. We really wanted to have another race but there was nowhere to go. He did have a racecourse school, and to be fair Nico [de Boinville] has done a lot of work with him, particularly in the indoor school, even yesterday morning he jumped half a dozen poles. Everyone has worked hard, it goes without saying, but Nico takes a lot of credit with this one.

"If Shishkin was 100/1 at the second-last [in the Sky Bet Supreme Novices' Hurdle on Tuesday], what was Champ at the last?

"Not surprisingly, he gets three miles well. They've gone hard up front and it just gave him that window of opportunity at the end. This is the first time he has been back to three miles since Aintree last year - I purposely went two and a half all season, and then we had that fall. That really upset plans a bit. But we've done a lot of schooling at home - Barry has been over a few times and Nico has done a lot of work; he's a wonderful schooling jockey."

Champ lives up to his name in the RSA

The Nicky Henderson-trained Champ (4/1) recorded a remarkable victory that will live long in the memory in the £175,000 G1 RSA Insurance Novices' Chase.

The eight-year-old had it all to do approaching the final fence, but thundered up the Cheltenham hill to past both Allaho (5/2 favourite) and Minella Indo (3/1), defeating the latter by a length.

Geraghty, retained jockey to owner JP McManus, was registering his second victory of the week following Epatante's win in the G1 Unibet Champion Hurdle yesterday and his 40th victory at the Cheltenham Festival overall.

Geraghty is the most successful current jockey at The Festival.

He said: "I knew I still had a chance on Champ turning in. But after jumping the second-last, I wasn't making up any ground and was still struggling.

"I knew when I committed to pop the last fence, that the two in front of me had not jumped brilliantly at that fence. On landing on the back of it, I was smelling money again.

"As soon as he picked up, I was about three lengths down by then and I knew it was over.

"He was on the back foot all the way. It's very tacky ground and hard work - JP rang me at eight o'clock this morning and said it might be a little bit better out a bit wider. So I went that way and he was right. It was all about finding a rhythm and helping him travel, so I didn't have to ask too many questions.

"Nico has done a lot of work schooling this fella over hurdles and poles with Nicky - they have worked hard to get him to where he is and it has paid dividends today.

"Any G1 is special at The Festival and you long for them. It was a great performance to get back up from an uncompromising position.

"There is a bit of confusion over his name, whether it is AP or Kieran McManus has won a few Dunhill Links, so there is a possible clash there. I'm not sure. This is a great race."

A race of changing fortunes saw Champ (4/1) snatch victory from the jaws of defeat in the G1 RSA Insurance Novices' Chase at The Festival™ presented by Magners.

Connections of runner-up Minella Indo (3/1) possibly had reason to rue what might have been, as their seven-year-old - and previous Festival winner, having taken the G1 Albert Bartlett Novices' Hurdle in 2019 - made a costly mistake at the last fence.

A somewhat shell-shocked Henry de Bromhead said: "He ran brilliant and we just got nabbed. He did everything right until the last but just missed that one unfortunately - that may have cost us but who knows?"

"Take nothing away from the winner, and well done to Barry and all the team with Champ. An extraordinary finish really - it just shows what can happen here."

It was a second consecutive silver medal on day two of The Festival for jockey Rachael Blackmore, who said: "He ran really well but we just didn't get the jump I needed at the last."

Allaho third in finish of surprises

The Mullins-trained Allaho attempted to win the race from the front - and complete a double for his owners, Cheveley Park Stud, which had just won the G1 Ballymore Novices' Hurdle with the Gordon Elliott-trained Envoi Allen - but having been chased all the way by Minella Indo was collared by him running around the home bend. Minella Indo led narrowly at the final fence, but made a mistake there, one that was matched by Allaho. As the two settled to fight out the spoils on the run-in they were both passed near the line by rallying Champ (4/1), who beat Minella Indo (3/1) by a length, with another length back to Allaho (5/2f).

The Paul Townend-ridden Allaho did not return to the winner's enclosure, and Mullins said: "Paul thought the horse was very tired when he pulled up and he said he would be better going straight back to the stable yard.

"It was an unusual finish. The two horses in front took each other on, got a bit tired, and Barry Geraghty [on Champ] is just riding out of his skin.

"The mistakes made at the last by the two leaders didn't help and they were tired. Our horse missed one fence down the back and was wrong again at the last, but in a three-mile chase mistakes like that will happen.

"I had a word with Paul and asked him if we should consider dropping Allaho down in trip and he said 'no' and that trip was fine.

"We have Aintree, Punchestown and other options to consider but nothing is decided for him yet."

Townend said: "He jumped the second-last well enough, but they were two tired horses going to the last fence and they did well to jump as well as they did. He's a lovely horse for the future."