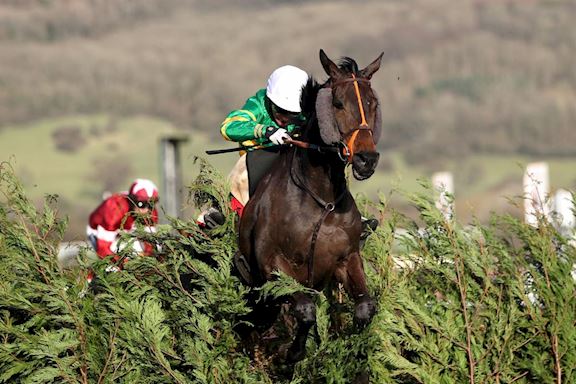 Cottin knows his Easysland is 'a champion'

French cross-country star Easysland became the horse who mugged the king today when thwarting the great Tiger Roll's bid for a fifth victory at The Festival.

Easysland (3/1), who was bought privately by J P McManus after winning a cross-country chase at The International at Cheltenham in December, and has since won a race at Pau in France, returned to land today's Glenfarclas Cross Country Chase, fending off Tiger Roll (8/11f). The double Randox Health Grand National winner tried his best but became tired in the ground and finished second beaten 17 lengths. Third-placed Out Sam (33/1) was another 15 lengths adrift.

The winner completed a 119/1 treble for McManus following victories by his Champ and Domaine De Compagnie.

Winning trainer David Cottin said of six-year-old Easysland: "I was expecting a good run from him. He seemed really well at home, his coat had changed, he was in good form and it was a really big advantage to have come here in December and to know the track. The heavy ground was also in his favour.

"He's a horse who is extremely well balanced and, while he is only a six-year-old, with a cross-country horse you have to train them when they are young over those jumps. We have been very patient with him as were his former owners. That has paid off.

"I always dreamed of riding a winner here as a jockey, and unfortunately it didn't happen, but I'm really pleased to be here now, and it's all down to the team at home who are very motivating. We have a lot of horses and a lot of staff."

Cottin smiled when it was pointed out that his horse had defeated the public's favourite, Tiger Roll, and said succinctly: "My horse is a champion. Today he is the best.

"He is still very young and his future is ahead of him. This was his best performance to date and he is still improving. Every race he shows an improvement. He will now have a holiday, but he will stay in this type of racing and come back here next season."

It's Easy for Easysland
Jockey Jonathan Plouganou recorded his first victory at The Festival™ presented by Magners following Easysland's impressive victory in the £65,000 Glenfarclas Cross Country Chase.
Trained in France by David Cottin, the six-year-old relished ground conditions and saw off the gallant Tiger Roll to record a 17 length victory.
Easysland was bought by owner JP McManus following his impressive victory over today's course and distance at The International in December and Plouganou was delighted to steer the horse to success in the famous green and gold silks.
He said: "Easysland is the best Cross Country horse!
"He has beaten Tiger Roll and he was brilliant today.
"This race is really special. It was an honour to ride in it, but to win it is even more important.
"Everybody in France knows Cheltenham is the temple of horseracing, so already just to be here is a great honour but to ride a winner here, especially in the Cross Country which is a discipline I love, it means everything.
"I have been placed at the Cheltenham Festival before when Sirene D'Ainay was second behind Quevega in the 2013 Mares' Hurdle so it is great to have a winner here. To come back and win here is superb.
"Tiger Roll is a real champion so to beat him was special and now Easysland is the champion.
"There is plenty of time for the future and Easysland can now recuperate and we can see what the future holds."
Tired Tiger not suited by ground
Tiger Roll may have tarnished his magnificent Festival record of four wins (two in the Glenfarclas Cross Country Chase, one in the JCB Triumph Hurdle and one in the National Hunt Chase) when going down to Easysland in the 2020 Glenfarclas Cross Country Chase, but trainer Gordon Elliott was not disheartened.
He said: "We are delighted. We are obviously disappointed that we didn't win, but I said before the race that the ground was a big worry. Once he is OK in the morning, that is all I care about. It was perfect [prep for the Grand National] and we are delighted."
8/11 favourite Tiger Roll, who finished 17 lengths behind the David Cottin-trained Easysland, was ridden by Keith Donoghue, who dismounted at the finish and the horse was taken back to the stables without entering the winner's enclosure.
Elliott said: "He's 100%, just tired after the race."