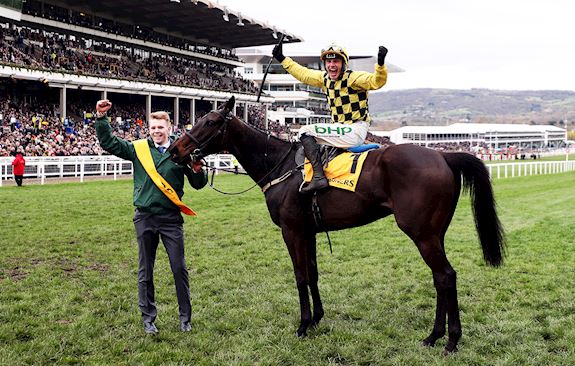 Al Boum Photo will be bidding to become the first horse since the great Kauto Star (2007 & 2009) to win the prestigious contest twice and the first since triple scorer Best Mate (2002 2003 & 2004) to score in consecutive years. Owned by Marie Donnelly, Al Boum Photo has won easily on his only start this season in a G3 contest at Tramore on New Year's Day.

It was a first success for Ireland's multiple champion trainer Willie Mullins with Al Boum Photo and his team for 2020 could also include Kemboy, a first fence faller a year ago before going on to defeat Al Boum Photo at Punchestown, as well as dual G2 scorer Real Steel.

Ireland accounts for seven of the remaining entries, with the challenge on Friday also set to include Delta Work (Gordon Elliott), who has bagged two G1 prizes this season at Leopardstown in the Savills Chase and Paddy Power Irish Gold Cup.

Henry de Bromhead could be doubly represented with Chris's Dream, winner of the G2 Red Mills Chase on his latest appearance, and Monalee, who went down by just a head to Delta Work in the Savills Chase. Completing the Irish-trained contingent is Presenting Percy (Pat Kelly), already a dual Festival winner in the 2017 Pertemps Final and 2018 RSA Insurance Novices' Chase. He was eighth when favourite for the 2019 Magners Cheltenham Gold Cup and third to Delta Work in the Paddy Power Irish Gold Cup on his latest start.

The home-trained challenge for the Magners Cheltenham Gold Cup is also very strong and includes Santini (Nicky Henderson), who was second in the 2019 RSA Insurance Novices' Chase and won at Cheltenham on his latest outing in the G2 Paddy Power Cotswold Chase on Festival Trials Day in January.

Paul Nicholls has been champion Jump trainer 11 times and needs just one more Magners Cheltenham Gold Cup winner to equal the record five wins in the contest set by the late Tom Dreaper.

Ditcheat's representative on Friday will again be Clan des Obeaux, who finished fifth to Al Boum Photo in 2019. This season he won the G1 King George VI Chase at Kempton Park on Boxing Day for the second year in succession and has been kept fresh for The Festival.

Giving an update on his stable star, Nicholls said: "Clan Des Obeaux is in great form and I couldn't be happier with him.

"He did a nice piece of work at Wincanton last week and has had a great preparation.

"He is a horse who goes well fresh and it has worked out nicely giving him a break since the King George.

"Sam Twiston-Davies couldn't pull him up after the line and said he would have won had it been three or three and a quarter miles, so we go in there hopeful about the trip.

"We will be more patient on him this year and hopefully he will run very well.

"He has won two King Georges and is still improving. He looks really well and we are relishing the challenge of the Gold Cup."

Paul Nicholls is responsible for ante-post favourite Solo, who made a stunning British debut when taking the G2 Adonis Juvenile Hurdle at Kempton Park by 13 lengths on 22 February.

Nicholls said: "Solo has come out of the Adonis at Kempton in great form and heads for the Triumph.

"He won very nicely at Kempton and it was a good performance.

"Harry [Cobden] was delighted with him and he also has experience having previously run at Auteuil.

"We are hopeful he will go well in the Triumph."

The third G1 contest on Friday is the £125,000 Albert Bartlett Novices' Hurdle (2.50pm, 2m 7f 213y), which has 33 horses going forward, headed by Thyme Hill (Philip Hobbs), a G2 winner at The November Meeting at Cheltenham before going on to take Newbury's G1 Challow Novices' Hurdle.

The going at Cheltenham has changed and is now:

Soft, Good to Soft in places (from Soft)

Racing on Friday takes place on the New Course.

Rain is forecast overnight into Sunday, yielding up to five millimetres. A spell of rain is expected on Monday afternoon, which could bring up to another four millimetres

Tuesday and Wednesday are predicted to be mostly dry, with possible showers on Thursday.

Cheltenham Racecourse is situated in Prestbury on the northern outskirts of the historic spa town of Cheltenham. The Home of Jump Racing, Cheltenham Racecourse is the venue for the world's pre-eminent Jump meeting. The Festival™ presented by Magners, which happens in March over four days every year, next takes place from Tuesday, 10 March, to Friday, 13 March, 2020 inclusive and tickets are on sale. Set against the beautiful backdrop of the Cotswolds, Cheltenham Racecourse is a stunning natural arena and offers the highest-quality action throughout the Jump season.

More information is available at www.cheltenham.co.uk and through: