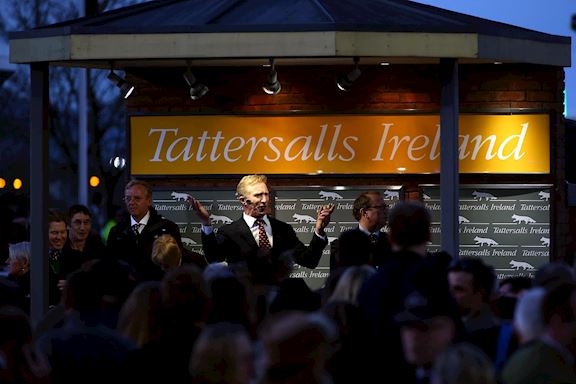 Feast of young talent goes under the hammer

A group of talented young racehorses will be put on the market this evening when auctioneers Tattersalls Cheltenham stages its Cheltenham Festival Sale in the winner's enclosure.
The catalogue consists of 24 horses, predominantly four and five-year-old point-to-pointers who have shown early ability and the promise of plenty more to come. Horses who have come from the Irish point-to-point field have a particularly good record when stepped up to racing under Rules, recent examples being Envoi Allen (Cheltenham Tattersalls February 2018, £400,000), who won yesterday's G1 Ballymore Novices' Hurdle, and Ferny Hollow (Cheltenham Tattersalls February 2019, £300,000), who landed the G1 Weatherbys Champion Bumper. Both horses were sold to their current owners at auctions run by Tattersalls Cheltenham.
Among candidates to follow in their hoofprints this evening are Tuscon Train (Lot 1), the first horse into the ring and who comes from the family of 1998 Cheltenham Gold Cup winner Cool Dawn. Tuscon Train has run once, winning a point-to-point at Tinahely for trainer Denis Murphy.
Chosen Port (Lot 4) beat Western Zara (Lot 7) at Ballycahane as recently as Saturday - the winner is a half-sister to the smart chaser Burton Port, and her trainer is Colin Bowe, who handled the fledgling career of Envoi Allen before he was sold into Gordon Elliott's stable - while Kenyan Cowboy (Lot 5), from Fran Nimmo's Warwickshire yard, is one of two catalogued horses trained in Britain. He won at Charing in Kent last month, and his close relatives include the smart hurdler/chaser Racing Demon, who was placed in what is now the G1 Ballymore Novices' Hurdle.
The good mare Function Dream, who won 11 races, appears as the granddam of Shirocco Dream (Lot 6), the Donnchadh Doyle-trained winner of a point-to-point at Borris House, while Docpickedme (Lot 8) and Patroclus (Lot 10) were first and second at Ballycahane. The winner is trained by Ellmarie Holden and was ridden by 'Doc', aka Derek O'Connor.
Gerri Colombe (Lot 11) and Amarillo Sky (Lot 15) are two more first-time-out winners for Bowe - Gerri Colombe scored at Lingstown on Sunday and includes tomorrow's St James's Place Foxhunter Chase hopeful Southfield Theatre among his relatives, while another contender for that hunters' chase, Alcala, appears on the catalogue page of the Denis Murphy-trained Gaston Phebus (Lot 13). Hollow Games (Lot 14) scored by a distance at Turtulla on Sunday for Mary Doyle's stable - the great two-miler and dual Festival winner Remittance Man (1991 Arkle Novices' Chase and 1992 Queen Mother Champion Chase) is a notable name in his pedigree.
Indigo Breeze (Lot 18), a half-brother to G1 Albert Bartlett Novices' Hurdle winner Brindisi Breeze, was travelled to Alnwick in Northumberland at the weekend by Lambourn-based Gearoid Costelloe, and he duly won a point-to-point bumper on debut in impressive fashion.
Killer Kane (Lot 21) is an interesting entry, being a half-brother to 2009 G1 Supreme Novices' Hurdle winner Go Native. Trained by Donnchadh Doyle, Killer Kane cost £70,000 as an unbroken three-year-old, but made a winning start to his career, also at Ballycahane, at the weekend.
The final lot into the ring, Greenrock Abbey (Lot 24), could be worth waiting for since he impressed when making a successful start to racing at Tyrella on Saturday. His distant relatives include the mighty Beef Or Salmon.
The Tattersalls Cheltenham Festival Sale is free to view from the steps around the winner's enclosure and is a good way for racegoers to spend some time while allowing traffic to thin out following racing.