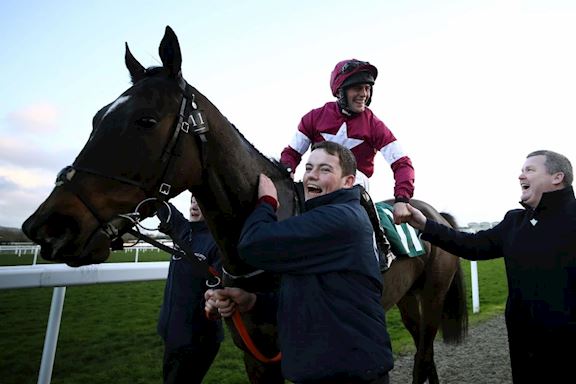 Trained by Gordon Elliott and owned by Giggnstown House Stud, the seven-year-old ran on strongly in the closing stages to repel the sustained challenge of 8/1 chance Kilfilum Cross, recording a length and three-quarter win, which was also the gelding's first victory over fences.

James has ridden over 200 winners in the Irish point-to-point circuit and said: "I have always dreamed of this and it is unbelievable. The horse took me everywhere and jumped everywhere. Gordon is a genius and I am just grateful to Gigginstown for giving me the ride. I can't believe it.

"I was jumping and actually getting there a bit too soon, so I held on to him the whole way down the hill until I got going to the second last.

"He has just taken off with one slap down the neck, winged the second last and was gone. He was pricking his ears going to the line and had loads left.

"I have ridden over 200 winners in point-to-points and it's going well. I haven't really done too much on the track but maybe I might get going now."

Elliott was recording his 31st winner at The Festival in total and his sixth winner of the week, making him the clear leader in the Irish Independent Leading Trainer Award.

The Cullentra maestro said: "I am delighted for Rob James, who is a great fella. He is one of the top point-to-point riders and a nice fella too. I thought that the trip would suit and this race has been the plan. It's a race we like - we didn't have Jamie Codd today but I told Rob to just go beside him for the first half of the race. He has done it to a peach."

Novice Milan Native gets off the mark in style

The owner had started the day in style when Samcro took the G1 Marsh Novices' Chase, and the pair combined for a 49/1 double.

At age seven Milan Native was among the youngest in a field of 23, and he went to post still a novice, but he was given a terrific ride by Rob James and looked the most likely winner from the moment he moved into contention on the outside at the top of the hill.

Eddie O'Leary, representing his brother Michael, who has stayed at home this week attending to his Ryanair business, said that the Gigginstown team has always liked Milan Native but he gave much of the credit to the rider, who is not well known here but enjoys a big reputation in the point-to-point field at home in Ireland.

O'Leary said: "He's a very valuable seven-pound claimer. He almost never rides on the track, but he's ridden hundreds of point-to-point winners. He gave that a fantastic ride."

He added: "Milan Native has always been a very nice horse and he might make a National type one day, but today is his day."