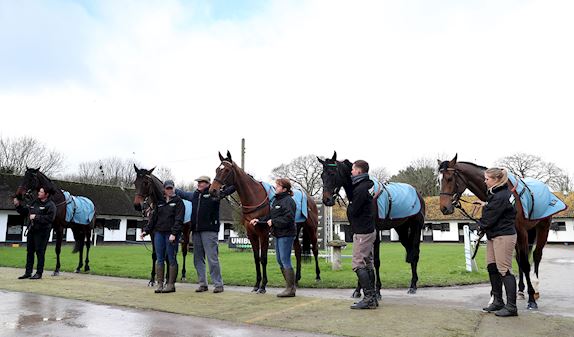 The countdown to The Festival™ presented by Magners intensifies today with the six-day confirmations for all seven races on day one of the meeting, Tuesday, 10 March.

Nicky Henderson accounts for five of the 19 entries in the feature £450,000 G1 Unibet Champion Hurdle (3.30pm). His team is led by Unibet's 3/1 favourite Epatante, who is bidding to become the fifth mare to win the two-mile hurdling championship, and last year's G1 JCB Triumph Hurdle victor Pentland Hills.

Henderson is also set to run G2 Unibet International Hurdle victor Call Me Lord, Fussil Raffles and Verdana Blue, as he seeks an unprecedented eighth victory in the race.

The Irish challenge is headed by Cilaos Emery (Willie Mullins IRE), who has been supplemented at a cost of £22,500 after successfully reverting to hurdles at Gowran Park last month.

Darver Star was third in the G1 Royal Bond Novice Hurdle at Fairyhouse in December and made a promising transition to open company when going down by a half-length in the G1 Irish Champion Hurdle at Leopardstown on 1 February.

"He had a racecourse gallop at Leopardstown on Monday and I am very pleased with him going into the race.

"It looks wide open and I think Cheltenham will suit him. He is the same sort of price as Espoir D'Allen was last year.

"He stays, travels and jumps well. I think he will be staying on up the hill strongly and hopefully he has a live chance."

Darver Star's Leopardstown conqueror Honeysuckle (Henry de Bromhead IRE) has been left in, although connections have confirmed she is set for an intriguing clash with the formidable Benie des Dieux (Willie Mullins IRE) in the G1 Close Brothers Mares' Hurdle (4.10pm, 2m 4f, 15 confirmations) later on the card.

Honeysuckle is unbeaten in seven starts under Rules, while Benie des Dieux's only defeat in nine starts for Willie Mullins came when falling at the final hurdle in this race last year.

Owner Marie Donnelly has a great chance of taking out the opening race of The Festival, with leading fancies Shishkin (Nicky Henderson) and Asterion Forlonge (Willie Mullins IRE) on course to carry her colours in the £125,000 G1 Sky Bet Supreme Novices' Hurdle (1.30pm, 2m 87y, 22 confirmations).

The first of three races on the card for novice chasers is the £175,000 G1 Racing Post Novices' Chase (2.10pm, 2m, 15 confirmations). Notebook (Henry de Bromhead) tops the betting after four straight wins over fences in Ireland, most recently defeating Cash Back (Willie Mullins IRE) in the G1 Irish Arkle at Leopardstown.

Brewin'upastorm is also defending a 100 per cent record over fences, although he has not raced since beating solid yardstick Southfield Stone at Taunton in November.

Trainer Olly Murphy said: "Brewin'upastorm had a school the other day and all went well.

"He had a knock at Taunton in November, so we had to back off him for a few weeks.

"We are really looking forward to running him, as we know he goes well fresh.

"It looks an open Arkle and there looks to be plenty of pace in the race. Hopefully, we can benefit from that by dropping him in."

The first two days of The Festival take place on the Old Course and the going is currently Soft all over. The forecast is for more settled conditions, with occasional light rain and temperatures becoming milder.