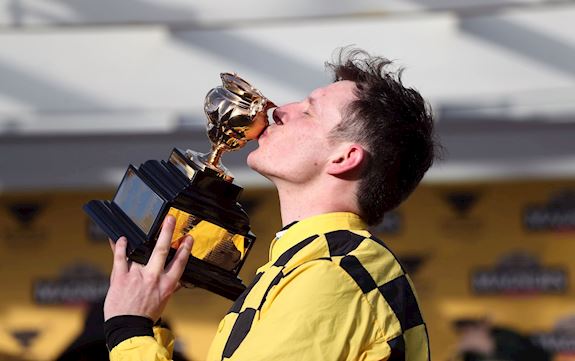 At the conclusion of another memorable week of racing at The Festival presented by Magners, the Regional Director, Cheltenham and the South West, Jockey Club Racecourses, Ian Renton, could look back with understandable pride.
Renton said: "It has been the most unbelievable four days of racing and I think today we have seen one of the finest Magners Cheltenham Gold Cups of recent years.
"To see Al Boum Photo return and win the race for the second time in a row was fantastic, but the very first race of the meeting, the Sky Bet Supreme Novices' Hurdle won by Shishkin, set the tone for some superb action.
"It was also lovely to see so many wonderful Cheltenham performers return and run so well again, none better than Samcro and Faugheen, who finished first and third in the Marsh Novices' Chase. Min's victory in yesterday's Ryanair Chase was another example."
Against the backdrop of the Coronavirus outbreak Cheltenham has followed Government advice throughout. Renton said: "The team here has done a highly-competent job in putting on the extra precautions and measures in line with the advice of the medical authorities, and the crowd has responded really responsibly.
"We advised people to follow Government health guidelines and stay away if they were in a vulnerable category, and a fair number opted to take that advice. We totally respected their decision and thank them for taking sensible precautions.
"For the large numbers who came here it has remained a wonderful four days of racing, the weather has been kind and they have witnessed some outstanding performances by horses and jockeys.
"Following a very wet winter I would also like to mention the team of groundstaff under Head Groundsman Ben Hastie who have coped so well and done a brilliant job in preparing the course and the ground. We stayed on the soft side of good, but everyone has been highly complementary about the ground."
Stewards' Reports
Race 1 - 1:30pm - G1 JCB Triumph Hurdle
Permission was given for GOSHEN (FR) and NAVAJO PASS to go early to post; ASPIRE TOWER (IRE) wore earplugs which were removed at the start and BURNING VICTORY (FR) and HOOK UP (FR) wore earplugs throughout the race. The performance of SOLO (FR), which finished eighth, beaten by 10¼ lengths, was considered. Paul Nicholls could offer no explanation for the colt's performance other than Harry Cobden reporting that SOLO (FR) was never travelling down the hill on the final circuit; SOLO (FR) was routine tested. Following the race, Rachael Blackmore reported that ASPIRE TOWER (IRE), placed second, jumped left-handed.
Race 2 - 2:10pm - G3 Randox Health County Hurdle
SAINT ROI (FR) and TIGER VOICE (FR) wore earplugs throughout the race. The performance of CIEL DE NEIGE (FR), which started second favourite and finished unplaced, beaten by 20 lengths, was considered. The representative of W. P. Mullins could offer no explanation for the gelding's performance other than Mark Walsh reporting that CIEL DE NEIGE (FR) stopped quickly. CIEL DE NEIGE (FR) was routine tested. Following the race, Kevin Brouder reported that PAKENS ROCK (IRE), unplaced, lost its action; the Veterinary Officer reported that a post-race examination of the gelding failed to reveal any abnormalities. The Veterinary Officer further reported that ARAMON (GER), placed second, lost its right-fore shoe.
Race 3 - 2:50pm - G1 Albert Bartlett Novices' Hurdle
FOXY JACKS (IRE) wore earplugs which were removed in the Parade Ring and JANIDIL (FR) and RAMSES DE TEILLEE (FR) wore earplugs throughout the race. The performance of RAMSES DE TEILLEE (FR), which finished unplaced, beaten by 51¼ lengths, was considered. David Pipe could offer no explanation for the gelding's performance. RAMSES DE TEILLEE (FR) was routine tested. An enquiry was held to consider interference approaching the final hurdle when the winner, MONKFISH (IRE), ridden by P. Townend, interfered with THYME HILL, placed fourth, ridden by Richard Johnson. Townend was suspended for 4 days (27, 28, 29 & 30 March) for careless riding as he had allowed his mount to drift right-handed for a considerable period of time, causing THYME HILL to be tightened for room against LATEST EXHIBITION (IRE), placed second, and Johnson having to then take a significant check. Following the race, the Veterinary Officer reported that LATEST EXHIBITION (IRE), placed second, lost its left-hind shoe.
Race 4 - 3:30pm - G1 Magners Cheltenham Gold Cup
MONALEE (IRE) wore earplugs which were removed at the start and AL BOUM PHOTO (FR and KEMBOY (FR) wore earplugs throughout the race. An enquiry was held to consider interference at the top of the hill on the final circuit when SANTINI, placed second, ridden by Nico de Boinville, interfered with MONALEE (IRE), placed fourth, ridden by Rachael Blackmore. de Boinville was suspended for 2 days (27 & 28 March) for careless riding as he had drifted left-handed towards the rail when insufficiently clear of MONALEE (IRE), resulting in Blackmore having to take a check. Shortly after jumping the final fence, Nico de Boinville, the rider of SANTINI, placed second, struck MONALEE (IRE), placed fourth, once over the nose with his whip, but after viewing a recording of the race it was considered to be accidental.
Race 5 - 4:10pm - St James's Place Foxhunter Chase
TOP WOOD (FR) wore earplugs which were removed at the start and BILLAWAY (IRE) wore earplugs throughout the race. Following the race, Alexandra Dunn reported that SAUSALITO SUNRISE (IRE), unplaced, was unsuited by the ground, which was officially described as Good to Soft, Soft in places on this occasion and would prefer a slower surface. Mr Zac Baker reported that BISHOPS ROAD (IRE), which was pulled up, was never travelling.
Race 6 - 4:50pm - G3 Johnny Henderson Grand Annual Handicap Chase
Permission was given for MARRACUDJA (FR) to go early to post and CHOSEN MATE (IRE) to wear a hood to the start; MARRACUDJA (FR) wore earplugs throughout the race.
Race 7 - 5:30pm - Martin Pipe Conditional Jockeys' Handicap Hurdle
GREAT WHITE SHARK (FR) wore earplugs throughout the race.