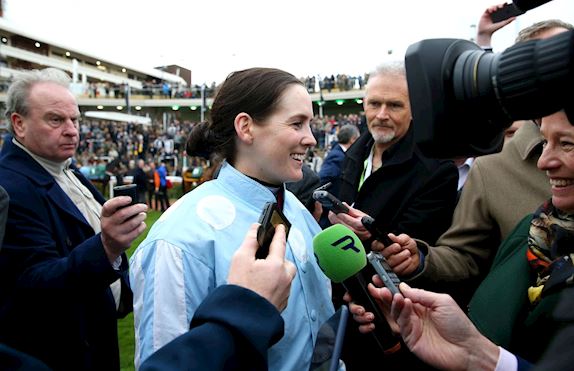 Tremendous coverage of The Festival in the press

Cheltenham is doing its best to counter the world's ills, and The Festival™ presented by Magners is cantering away with the good-news coverage in today's newspapers.

Editors have devoted plentiful coverage to the best of yesterday's action and assessment of day two. No one is pretending Coronavirus, stock market declines, falling interest rates, and isolation measures are not happening, but The Festival is a large dose of sunshine in the gloom. The Daily Express headline 'All bets are on' sums up this can-do attitude above a montage of photographs that capture The Festival's appeal.

'Famous Festival is open for business' is the Western Daily Press's assessment of a day when more than 60,000 people turned up to celebrate the racehorse in its greatest Jump-race setting.

Day one coverage is headed by a brilliant win for the Nicky Henderson-trained Epatante under jockey Barry Geraghty in the Unibet Champion Hurdle. 'Easy for Epatante' is a headline in The Sun, while 'Eighth wonder' is the Daily Mail's take, a reference to Henderson's eighth victory in the crown jewels of hurdling. 'J P's epic birthday' is a Daily Mirror headline which acknowledges that Epatante's win came on owner J P McManus's 69th birthday. The Daily Mirror's David Yates quotes Barry Geraghty paying tribute to McManus with the often-repeated words: "He puts so much into the game - he deserves it."

Alastair Down, making a welcome return to the pages of the Racing Post after a break, summarises the race in his unique style. Of the closing stages he writes: "In truth Geraghty was travelling first-class in the wide-ass seats, slowly easing the champagne cork of the bottle as his rivals struggled with the screwtops."

Brough Scott, writing in The Times, quotes Epatante's groom, Sophie Candy, saying: "In the past week I have been bitten, kicked and trodden on. That tells us she is in top form."

Jockey Rachael Blackmore was feted as one of the stars of The Festival before it started, and her win in yesterday's Close Brothers' Mares' Hurdle on Honeysuckle takes top billing - you could be forgiven for thinking she won the Unibet Champion Hurdle on her way to an opening-day treble. The Times' racing pull-out front cover is headlined, 'Epatante takes Champion Hurdle', but the large photo above shows Blackmore celebrating as she and Honeysuckle enter the winner's enclosure.

'Blackmore to the fore' is the headline on The Daily Telegraph's racing pull-out front cover, which is dominated by a shot of the jockey, fist-raised in triumph on willing Honeysuckle. Chris Goulding of the Daily Express writes, ". . . she has captured the hearts of racegoers."

'Rachael romps it' is the Daily Mail's summary, whle Paul Hayward of The Daily Telegraph says Blackmore's victory was further confirmation that ". . . gender is disappearing in Jump racing." Kevin Garside, chief sports correspondent of i, makes the case that gender in this sport is irrelevant, but in order to do so he has to use the word 'woman', which kind of counters his point. Man or woman, short or long, it is all about talent. The lanky frame of leading amateur rider Jack Andrew makes for a long photograph in the Daily Star. At 6ft 4in he is seen towering over reporter Berny Torre, who quotes the rider saying: "I couldn't help but keep growing."

Coronavirus, its impact and the precautions being taken to control it, are topics of conversation in news and sports pages. Photographs of people using hand sanitisers at The Festival make topical shots in many newspapers, while the Daily Mail's two-page spread on the topic, under the headline 'Two faces of Corona UK', depicts an aerial shot of a tightly-packed Cheltenham grandstand, and two photos taken in the Gloucestershire village of Bourton On The Water. In one tourists queue to take photos of its picturesque Cotswolds charm, in the other, taken yesterday, it is eerily empty.

Rick Broadbent of The Times considers a number of angles, including the impact to racing of a shutdown, and writes: "Racing might able to survive without spectators, but it would be another sort of sanitised experience," while his colleague, Tom Morgan, reveals that well-known racehorse owners Trevor Hemmings and Michael O'Leary are absent from The Festival because of the virus. Hemmings is 84 and a diabetes sufferer, while O'Leary is flying his Ryanair business through turbulence as flights cancel and revenue falls. O'Leary owns Tiger Roll, who bids for a fifth win at the famous race meeting when lining up in today's Glenfarclas Cross Country Chase.

A photo of Tiger Roll adorns the front of the Racing Post under a headline 'The Champion and the wonder horse'. Defi Du Seuil, a contender for today's Betway Queen Mother Champion, also features in that cover shot, and he is the selection of Marcus Armytage in The Daily Telegraph. This morning's news that main market rival Chacun Pour Soi is a non-runner makes Armytage's prediction very likely.

Ground beginning to dry out

Cheltenham's Clerk of the Course Simon Claisse predicted that the track will dry out a little during the course of today's racing.

He said: "We changed the going this morning from Soft, Heavy in Places to Soft all round on the Chase and Hurdle courses. We've had 36 hours of dry weather now since the last rainfall, and with this breeze this afternoon it will probably just dry out through the card.

"We are looking forward to another afternoon of top-class racing."