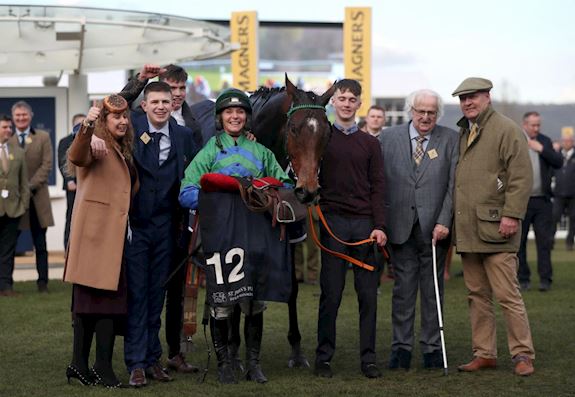 It may have been another shock result at The Festival presented by Magners, but It Came To Pass's 66/1 victory in the St James's Place Foxhunter Chase was no surprise to County Cork trainer Eugene O'Sullivan.
He knew what it takes to win the 'hunters' Gold Cup' because 29 years ago he prepared his family's home-bred Lovely Citizen to score under his brother William. Maintaining that family theme, O'Sullivan today legged his daughter, Maxine, into the saddle, and she pressed all the right buttons as the ten-year-old gelding scooted to an easy success.
The withdrawal earlier this afternoon of last year's winner Hazel Hill following an assessment by BHA veterinary officers removed one obstacle, but It Came To Pass won by ten lengths from Billaway (11/4f), with last year's runner-up, Shantou Flyer (3/1), another five lengths back in third. Staker Wallace finished fourth.
The only downside for the winning father and daughter was created by the Coronavirus outbreak, which meant other members of their family were unable to travel from Ireland for the occasion.
Eugene O'Sullivan said: "We bought this horse last year with a view to running him in this race, but we only picked him up after Christmas and couldn't get him fit in time. Maxine has done an awful lot of work on him at home, and she gave him a savage ride today. All the big guns were queuing up behind but Maxine knew what she had, she rode him accordingly and I'm very proud of her.
"I've been trying to win this race for 29 years - I won it when I was very young and I'm a lot older now. I just hope I don't have to wait another 29 years to win it again. I was like a Jack-in-the-Box the whole way, feeling nervous for Maxine and nervous for the horse. I expected a big run from the horse, but I've been disappointed here in the past.
"I knew if he came around the final bend anywhere near the front he would stay and quicken up. Jim Culloty trained the horse three years ago when he ran in the race and fell at the third-last when going very well. So I had a horse with course experience and just had to get him here in good order.
"No, I didn't back him!
"He pulled up last time out in a point at Kilfeacle, but the ground was very heavy and two shoes of his shoes were pulled off. We were just praying for good dry weather all week and we more or less got it.
"His owners, Gerald and Alary O'Sullivan are from Manchester. They are not related to us, but they are lovely people who have supported us with horses for the past 25 years. We met at a sale one day and it went from there."
4.10pm St James's Place Foxhunter Chase (Amateur riders')
1 It Came To Pass (Alurie O'Sullivan) Eugene O'Sullivan IRE 10-12-00 Miss Maxine O'Sullivan 66/1
2 Billaway (J Turner) Willie Mullins IRE 8-12-00 Mr Patrick Mullins 11/4f
3 Shantou Flyer (David Maxwell Racing Limited) Rose Loxton 10-12-00 Mr David Maxwell 3/1
21 ran
Distances: 10, 5
Tote Win: £162.60 Places: £25.30, £1.50, £1.50 Exacta: £872.00
Eugene O'Sullivan - 2nd winner at The Festival
Miss Maxine O'Sullivan - 1st winner at The Festival