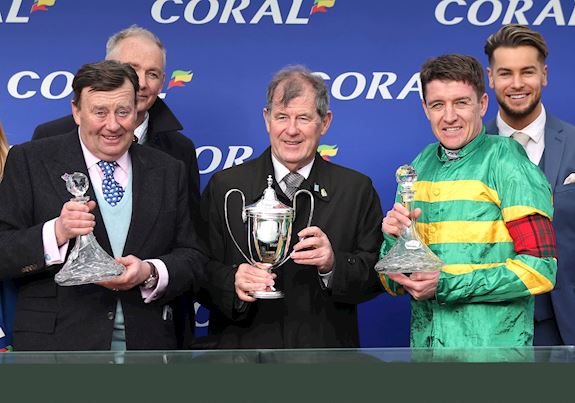 Race 2 - 2:10pm - G1 RSA Insurance Novices' Chase
ALLAHO (FR) wore earplugs throughout the race. An enquiry was held to consider whether Harry Cobden, the rider of COPPERHEAD, which fell at the final fence, Daniel Mullins, the rider of EASY GAME (FR), which also fell at the final fence, and Robbie Power, the rider of SLATE HOUSE (IRE), placed sixth, had continued in the race when their horses appeared to be tired. The riders and the Veterinary Officer were interviewed and recordings of the incident were viewed. The Veterinary Officer stated that post-race examinations of COPPERHEAD and EASY GAME (FR) revealed both geldings recovered within normal parameters. Cobden explained that COPPERHEAD had jumped the second-last hurdle well but when approaching the final fence the gelding had not picked up when asked, resulting in the fall. Mullins explained that he also felt his mount had jumped the second-last fence well and was still galloping fluently towards the final obstacle. However, after a good jump at the last fence, Mullins explained that EASY GAME (FR) had tripped and fallen shortly after landing. Power's explanation that SLATE HOUSE (IRE) had been hampered at the second-last fence which cost the gelding momentum and SLATE HOUSE (IRE) had only tired just before the final fence, by which time he had insufficient time to safely pull up. Power added that having jumped the last the gelding had then galloped on at the one pace up the hill. The riders' explanations were accepted.

Race 3 - 2:50pm - G3 Coral Cup
GOLAN FORTUNE (IRE) appeared to be kicked by another runner in the Parade Ring. Having been examined by the Veterinary Officer in the Parade Ring, the gelding was deemed fit to race. The Starter reported that Simon Torrens, the rider of KILFENORA (IRE), and Gavin Brouder, the rider of CRACKING SMART (FR), failed to walk or jig-jog into the start. The riders and the Starter were interviewed and recordings of the incident were shown. Torrens and Brouder were both suspended for 1 day for misconduct at the Start. Being 7lbs claimers, Torrens and Brouder were offered the opportunity to have someone accompany them in the enquiry, but declined. Following the race, P. Townend reported that FRANCO DE PORT (FR), which was pulled up, ran too freely; the gelding was routine tested. Brian Hughes reported that CHAMPAGNE WELL (IRE), which was pulled up, made a bad mistake at the second-last hurdle.

Race 5 - 4:10pm - G2 Glenfarclas Cross Country Chase
D. Cottin was fined £140 as the record of vaccinations in the passport of EASYSLAND (FR) did not comply with the Rules of Racing. TIGER ROLL (IRE), placed second, did not enter the winner's enclosure on veterinary advice. The Starter reported that Mark Walsh, the rider of JOSIES ORDERS (IRE), Paddy Kennedy, the rider of NEVERUSHACON (IRE), Keith Donoghue, the rider of TIGER ROLL (IRE) and Darragh O'Keeffe, the rider of YANWORTH, failed to walk or jig-jog into the start. The riders, who had all been briefed about the particular procedure for the start of this race, and the Starter were interviewed and recordings of the incident were shown. Walsh, Kennedy, Donoghue and O'Keeffe were suspended for 1 day for misconduct at the Start. Following the race, the Veterinary Officer reported that the winner, EASYSLAND (FR), lost its left-hind shoe.

Race 6 - 4:50pm - G3 Boodles Juvenile Handicap Hurdle
SACCHOANDVANZETTI (IRE) wore earplugs in the Parade Ring and BAJAN EXCELL (IRE) and PALLADIUM wore earplugs throughout the race. The performance of PALLADIUM, which started joint-favourite and was pulled up, was considered. Nicky Henderson's explanation that the gelding was unsuited by the ground, which was officially described as Soft on this occasion and in his opinion was riding tacky, was noted. PALLADIUM was routine tested. The performance of BLACKO (FR), which started joint-favourite and was pulled up, was considered. Alan King could offer no explanation for the gelding's performance other than Tom Bellamy reporting that BLACKO (FR) stopped quickly. BLACKO (FR) was routine tested.

Race 7 - 5:30pm - G1 Weatherbys Champion Bumper
Permission was given for ESKYLANE (IRE) to wear a hood to the start; APPRECIATE IT (IRE), FIVE BAR BRIAN (IRE) and PANIC ATTACK (IRE) wore earplugs throughout the race. Having reviewed recordings of the false start, the Starters were satisfied that no riders should be reported for contravening the starting procedures.