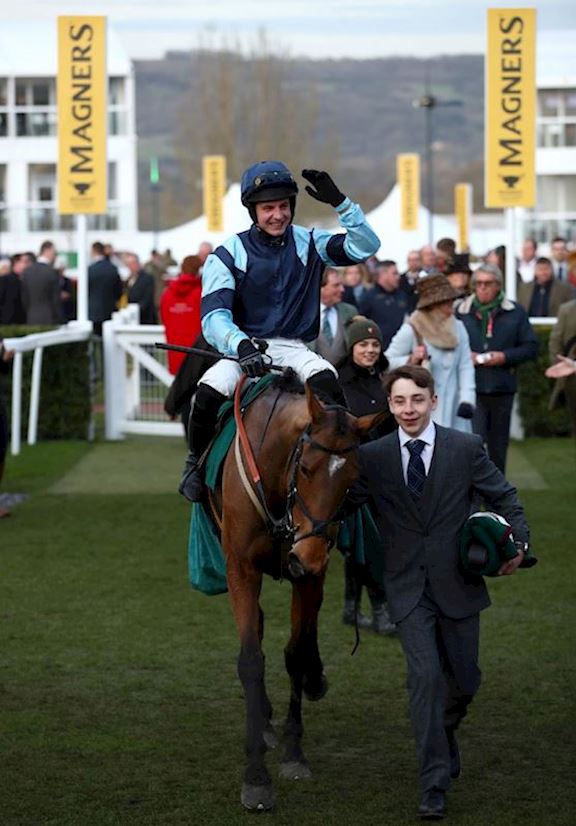 No Irish whitewash as Indefatigable takes last for Webber

Paul Webber broke his Festival duck when Indefatigable (25/1, Rex Dingle) got up on the line to beat the Philip Hobbs-trained Pileon (9/1, Ben Jones) a short head in a dramatic £70,000 Martin Pipe Conditional Jockeys' Handicap Hurdle.
However, it might have been a different story had Column Of Fire (Eoin Walsh) not fallen when challenging strongly at the last and looking as though he might deliver an Irish whitewash.
Webber, whose late father John was a dual Festival winner with Elfast, confirmed: "It is our first. I've only waited 24 years - I'm probably the oldest training virgin to get a winner here! It's a great thrill. Everything went wrong for her and she still managed to battle home.
"We've had plenty of seconds here and it all went so wrong. The drying ground was important. We had to skip Tuesday (G1 Close Brothers Mares' Hurdle) as it was too soft for her."
Pileon's second place completed a frustrating week for Philip Hobbs. He was left clear by Column Of Fire's fall and looked sure to win, but Indefatigable made up ground hand over fist up the hill and just nailed him, even though he battled back when she came to him.
Jockey Ben Jones said: "I had a lovely run round and he jumped superb. He just got going again when the winner got upsides him. Another ten yards and we would have been back in front."
5.30pm Martin Pipe Conditional Jockeys' Handicap Hurdle
1 Indefatigable (Philip Rocher) Paul Webber 7-11-09 Rex Dingle 25/1
2 Pileon (Tim Syder) Philip Hobbs 6-11-02 Ben Jones 6/1
3 Great White Shark (Malcolm Denmark) Willie Mullins IRE 6-11-00 Donal McInerney 40/1
4 Happygolucky (Lady Dulverton) Kim Bailey 6-11-01 Stan Sheppard 25/1
23 ran                 4/1 fav Front View (12th)
Distances: sh, 3, nk
Tote Win: £31.50                 Place: £5.70, £3.20, £7.60, £5.20         Exacta: £337.20
Paul Webber - 1st winner at The Festival
Rex Dingle - 1st winner at The Festival
Rex is king of the last race
Rex Dingle rode the first Festival winner of his career when Indefatigable, trained by Paul Webber, flashed home to catch Pileon in the shadow of the post.
The Schiaparelli mare, a 25/1 chance, beat the Philip Hobbs-trained Pileon (Ben Jones) by a short-head in the concluding race of The Festival 2020.
Dingle said: "The plan wasn't to ride her like that. I was lining up middle to outer and that was my plan, to be halfway, but there was so much scrummage, she was more worried about biting the ones next to me. She was trying to back out of it so, in the end, I decided to line up in the second line and I would probably get a better tow forward. Then there was a false start and I was a bit further back than I wanted to be and was never really travelling the whole way round.
"Gavin [Sheehan] had told me lots about her and Paul had told me lots about her. I knew that, once I passed a few, she might take off and that is what she did. When I was jumping the last, I could see Ben [Jones] in my sights but I didn't know how well he was going. I didn't know that I had got there, to be fair, when I passed the line.
"You dream of it but you never think that it is going to happen. It's amazing. I have just done what every other lad has done - everyone is trying their best - and I am just lucky that I ride for good people and had a bit of luck. I have some nice rides tomorrow, so I look forward to that!"