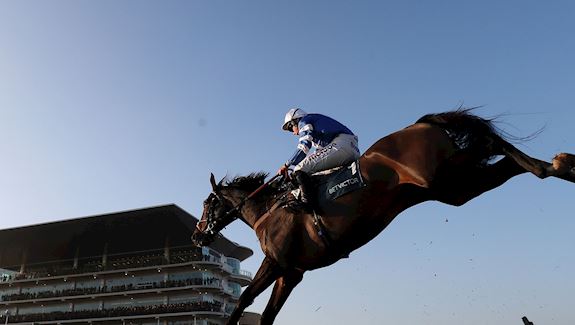 The eight-year-old, whose seven-race winning streak dates back to October, 2018, was last seen out over the course and distance in the G2 galliardhomes.com Cleeve Hurdle on Festival Trials Day, when he overcame Summerville Boy (Tom George) in decisive fashion.

Trainer Emma Lavelle said: "Everything is fine with Paisley Park and he is on track for the Paddy Power Stayers' Hurdle.

"We have had a good preparation with him really. It was a great relief to see him win at Newbury and then Ascot being off worked out well in the end.

"His Cheltenham performance in the Cleeve was excellent. He essentially handled a race where the others tried to beat him tactically.

"He is a huge talent and it is exciting to have a horse attempting to defend his crown in one of the championship races."

Prolific Irish mare Benie des Dieux (Willie Mullins IRE) has been left in, although connections have indicated that she is more likely to run in the G1 Close Brothers Mares' Hurdle on the opening day.

Frodon (Paul Nicholls) and jockey Bryony Frost raised the roof with a never-say-die victory in last year's Ryanair Chase (2.50pm, 13 confirmations), with Frost becoming the first female jockey to win a G1 race over obstacles at The Festival.

After an inauspicious start to the current campaign, Frodon was back on song last time out with a comfortable success in the G2 Silviniaco Conti Chase at Kempton Park in January.

Itchy Feet provided trainer Olly Murphy with a first top level success in the G1 Scilly Isles Novices' Chase at Sandown Park last month and the six-year-old will attempt to give his handler a first winner at The Festival.

Murphy said: "I have been delighted with Itchy Feet's preparation.

"The ground won't be a problem for him if it comes up soft and I think he has been slightly overlooked after his Sandown win.

"I am not really sure why as the manner of his win was impressive; despite making a mistake at the second-last, he ran on strongly.

"It is very exciting to have my first G1 winner being a live player for a G1 at The Festival.

"I really think this race will suit and, while there are some interesting horses such as Samcro and Allaho in there, I wouldn't swap our lad."

Revitalised 12-year-old Faugheen (Willie Mullins IRE) comes in on the back of an unbeaten campaign over fences, six years after his first victory at The Festival in the G1 Ballymore Novices' Hurdle.