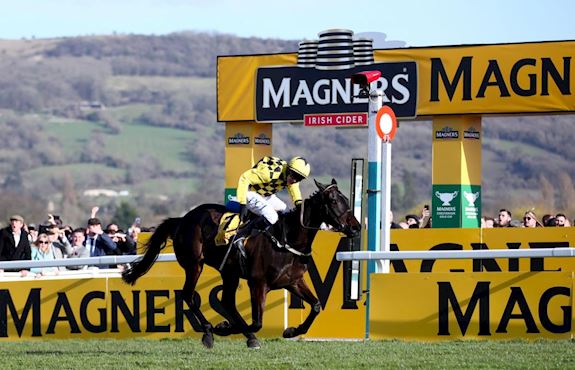 Al Boum Photo (100/30 favourite) became the first back-to-back winner of the £625,000 G1 Magners Cheltenham Gold Cup since Best Mate (2002, 2003 & 2004) with an electric success in Jump Racing's Blue Riband event.
Ridden by Paul Townend, Al Boum Photo produced a scintillating leap at the final fence and held on gamely in the closing stages to deny the gallant Santini (5/1) to register a neck success in the extended three and a quarter-mile event.
Al Boum Photo, an eight-year-old son of Buck's Boum also became the first horse since Kauto Star (2007 & 2009) to win the race twice. He enjoyed the same preparation for this year's race as when he captured the 2019 Magners Cheltenham Gold Cup having won his only other start this in the G3 Savills Chase at Tramore on New Year's Day.
Mullins is enjoying a special day in the Cotswolds, with this being his fourth winner in succession following the victories of Burning Victory (12/1, G1 JCB Triumph Hurdle), Saint Roi (11/2 favourite, G3 Randox Health County Hurdle) and Monkfish (5/1, G1 Albert Bartlett Novices' Hurdle). Al Boum Photo's success allowed Mullins to complete a 2,196/1 four-timer.
The master of Closutton, registering his seventh victory of the week at The Festival™ presented by Magners 2020 and his 72nd victory overall at the meeting said: "We're delighted to win the race for the second year running with Al Boum Photo.
"We just decided not to break winning formula and just take in the same preparation as he did last year. Don't break a winning formula when it works and it's paid off thankfully.
"I thought this year's Gold Cup wasn't anything like last year's. I was just thinking if he had a clear round and a bit of luck then it was all to play for.
"I was happy throughout and Paul was brave on him at the last. Paul's plan came together and I'm delighted for him as well as Marie and Joe Donnelly, so I am just delighted.
"It's fantastic and an absolutely unbelievable day. Paul does his own thing and he probably rides better under a little bit of pressure.
"It's really, really good for him. I am delighted for Paul. To take over from someone like Ruby Walsh - Paul has come and stamped his authority on his season in Ireland riding for our yard.
"It is a tough act to follow, but he is Paul Townend, stable jockey to Willie Mullins and he is top-class - I'm really pleased for him.
"I asked what Paul was going to do and he sort of said what he was going to do. I think the horse just ignored the actions of Paul and he didn't disappoint the horse - he let the horse do it. That's a rider riding with huge confidence. It worked out and I am really happy and delighted for Paul."
Mullins is now heading the Irish Independent Leading Trainer Award with seven winners.
3.30pm Magners Cheltenham Gold Cup (Grade 1)
1 Al Boum Photo (Marie Donnelly) Willie Mullins IRE 8-11-10 Paul Townend 100/30f
2 Santini (Richard & Lizzie Kelvin-Hughes) Nicky Henderson 8-11-10 Nico de Boinville 5/1
3 Lostintranslation (Taylor & O'Dwyer) Colin Tizzard 8-11-10 Robbie Power 10/1
12 ran
Distances: nk, 1¼
Tote Win: £3.70 Place: £1.80, £2.10, £2.90 Exacta: £19.40
Willie Mullins - 72nd winner at The Festival
Paul Townend - 15th winner at The Festival
Two Golds for Townend
Paul Townend crowned an outstanding day at The Festival by winning the G1 Magners Cheltenham Gold Cup for the second year running aboard the Willie Mullins-trained Al Boum Photo.
The French-bred eight-year-old, owned by Joe and Marie Donnelly, won by a neck from the Nicky Henderson-trained Santini (Nico de Boinville). Al Boum Photo was the 100/30 favourite.
It was Townend's third victory of the day, his fifth of the week - which means he takes the Holland Cooper Leading Jockey Award for the Ruby Walsh Trophy ahead of Barry Geraghty - and his 15th Festival success in total.
Townend said: "It's amazing. I'd want some boot in the rear end if I had been in front that early and got beat by Santini. I thought that I would never feel anything like the feeling I had here last year, but I think this is even better. It's unreal. It's a credit to Willie - to go to Tramore two years in a row and come here with one run - the man is a genius.
"To be honest, I just went out with the plan of getting into a rhythm like last year. We've missed a few fences but he's always found his feet, and it just happened again at the top of the hill, he was jumping a bit better and I ended up in front a bit sooner than I wanted, but I was able to hang on there and produce him when I needed him at the last. He's a tough animal.
"It was a very different race to last year - we knew that going out there, everyone knew it was going to be a different race to last year, but it's the same result, which is the main thing!
"I didn't have to fight for it; a couple of good jumps got it for me there, and I think that was very important. He has everything, this horse. Guts as much as everything else.
"I went into the Gold Cup last year the same as I went into it this year. I was riding for the Donnellys, and this was their one bullet. There was no real added pressure from that sense this week. Riding for Willie and them, they don't put any more pressure on. Any extra pressure I was putting on myself. [Being Mullins' number one jockey] I suppose it just meant I had better chances, maybe! At least the week has finished well!
"This is huge. This is the main stage. Before this I was having a brilliant day, but this is the icing on the cake, I suppose. The Gold Cup is the Gold Cup, and sure, we'll wait 12 months for another one again." 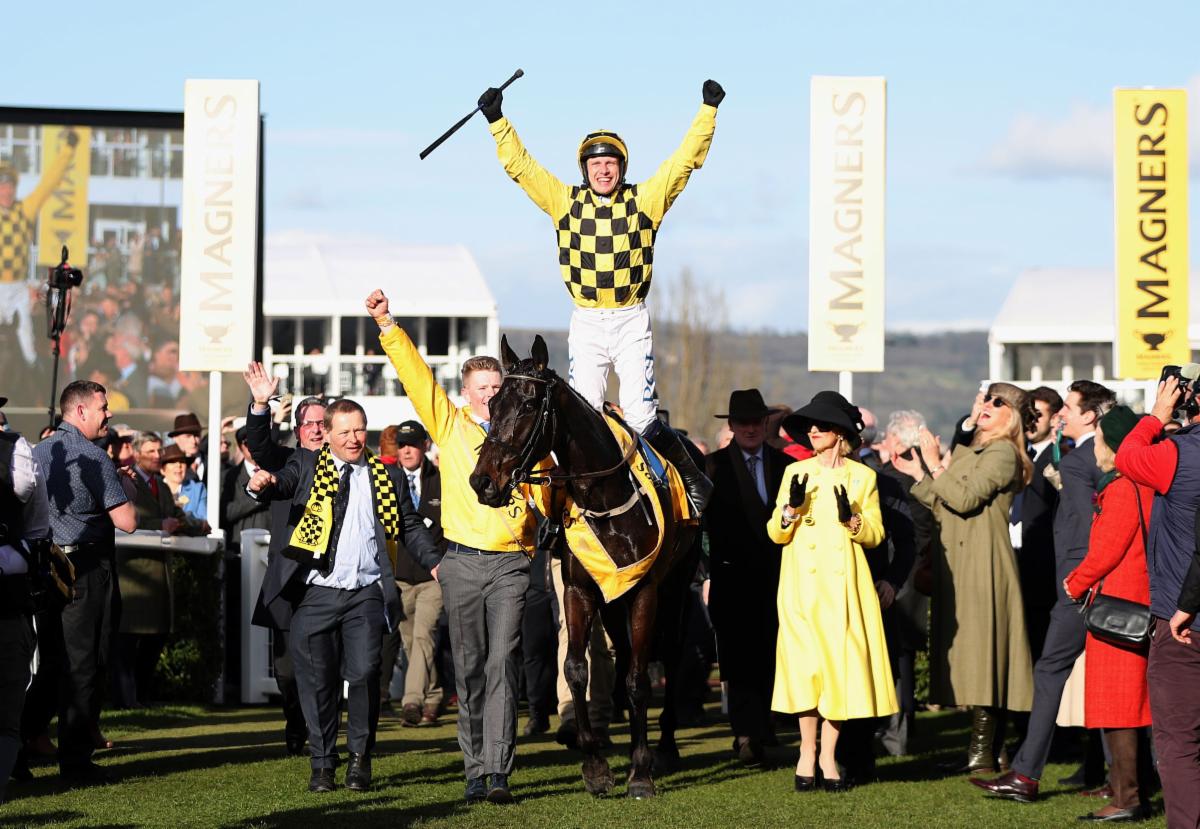