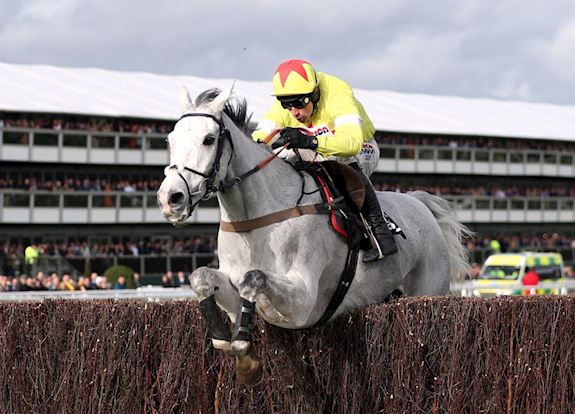 Politologue caused the upset of The Festival™ presented by Magners 2020 so far with an all-the-way 6/1 success in the £400,000 Betway Queen Mother Champion Chase.
Trained by Paul Nicholls, the nine-year-old son of Poliglote jumped with aplomb under Harry Skelton and stayed on strongly in the closing stages to record a nine and a half-length success in the G1 event over stable companion Dynamite Dollars (7/1). The 2/5 favourite Defi Du Seuil was disappointing and a well-beaten fourth.
This was Politologue's third victory in G1 company and Nicholls' sixth win in the Betway Queen Mother Champion Chase, joining Nicky Henderson and Tom Dreaper as the winning-most trainer in the race's history.
The Ditcheat maestro, registering his 46th win in total at The Festival, said: "Politologue is best fresh and he is brilliant when he is fresh. He is not the easiest to train - he bled in the Tingle Creek and we had to change what we do with him, but he was very, very ready today. There was no other way to ride him. The other horse [Dynamite Dollars] made a mistake at the top of the hill - he wants two and a half miles - but it was two very good runs.
"I am pleased because it shows we were right about coming here fresh. I just can't wait for Clan des Obeaux on Friday now. It shows that, when they are very fit and very fresh, they are brilliant.
"I thought Sam [Twiston-Davies] was going to ride him all the way along the line and I feel for Sam because he has ridden some brilliant races but John wanted Harry. I didn't argue - Harry rides out for us - and I feel for Harry Cobden because it was a difficult decision. Dynamite will win plenty of races over a bit further.
"The race fell apart a little bit with a few coming out but it was his race today and he was very good. I am very pleased. I knew we were in the right place and I knew that he wouldn't stop. Harry was doing the right job and he was jumping brilliant from the front. I am thrilled with him.
"I looked in the paddock beforehand and thought he was a stand-out. I got him here fresh and fit and it's just worked out brilliantly."
Winning owner John Hales was enjoying a third victory in the Betway Queen Mother Champion Chase following on from the successes of One Man (1998) and Azertyuiop (2004) in the two-mile chasing championship.
An emotional Hales commented: "That was brilliant from Politologue. We dictated it from start to finish and Harry got it absolutely right tactically. In the previous race, he thought they had gone too slow so I thought 'make your own pace - if that means go from the start, go and run the finish out of them'. That is precisely what he did and I am over the moon.
"My third Queen Mother. After the bad news I had yesterday with my horse in the Arkle [Maire Banrigh who fell four out] - she is in hospital but she is going to be OK. She was cruising yesterday and I knew that she would have won that race but fate wasn't with us."
3.30pm Betway Queen Mother Champion Chase (Grade 1)
1 Politologue (John Hales) Paul Nicholls 9-11-10 Harry Skelton 6/1
2 Dynamite Dollars (Michael Geoghegan) Paul Nicholls 7-11-10 Harry Cobden 7/1
5 ran
2/5 fav Defi du Seuil (4th)
Distances: 9½
Tote Win: £6.30 Place: £2.50, £2.40   Exacta: £33.00
Paul Nicholls - 46th winner at The Festival
Harry Skelton - 4th winner at The Festival

Skelton: 'You couldn't script it'

Skelton gave the grey nine-year-old a positive, front-running ride, and the chasing pack could never catch up. They beat Dynamite Dollars - also trained by Paul Nicholls, and the chosen ride of Nicholls' stable jockey Harry Cobden - by nine and a half lengths at odds of 6/1. The 2/5 favourite Defi Du Seuil (Philip Hobbs/Barry Geraghty) finished fourth of the five runners.

Skelton said: "It's my first ride in the Champion Chase. I owe so much to the Hales family. They have known me since I was a little kid. Pat used to take me around all the shows [they owned showjumpers with Skelton's father, Nick] and they are very, very good supporters of the family. Me and Dan [Skelton's trainer brother] grafted at Paul's for a long time and we will be ever-grateful for what he has done for our careers.

"Paul told me at the start of the season to come back and ride out a little bit. It's just magic. This is what he can do, he trains them to perfection. I am just so thankful to everyone for giving me the opportunity. I cannot believe it.

"As a kid you dream of winning these things. He was great all the way round; his ears were flickering back and forth the whole way and I thought, 'there's always a bit there when I need there to be', and I thought if I could stretch them from the top of the hill... I didn't want to go too hard and then completely warp myself, but from three out I landed running and set him alight, and he's kept going hard all the way up the run-in.

"Paul said to John that he was going to wait and go here fresh; he's a master. You know his horses from the back of three out they won't stop. He's trained them for the day. I spent a long nine years at Paul's grafting away, and every single day, every minute, every hardship, it's been worth it. What the Hales family have done for our family - you couldn't script it. It's my third ride for them, and the way down to the start I saw two magpies, and thought, perhaps this is it.

"Obviously Harry Cobden can only ride one horse, and last Wednesday John rang me up and said, 'Harry, you're riding Politologue in the Champion Chase - you'd better ring Paul and go down and sit on him'. Then you start believing. I sat down and watched every replay of him; you just do your homework. I had a sit on him, he felt great. If Paul tells you he's good and he believes in him, you can believe. Obviously it's all worked out perfectly."

Disappointment for Cobden, but a thrill for Burke

Last year's runner-up Politologue (6/1) sprang a surprise for Paul Nicholls and Harry Skelton in the £400,000 G1 Betway Queen Mother Champion Chase, but there were mixed emotions for the placed jockeys.

Nicholls' stable jockey Harry Cobden turned down the ride on the winner to instead take the mount on runner-up Dynamite Dollars (7/1), beaten nine and a half lengths, so was entitled to feel a tinge of disappointment.

Cobden said: "He jumped well and did everything right. We just got beat by a better one on the day."

The Tom George-trained Bun Doran (33/1) outran his dismissive odds, finishing a further three and a quarter lengths back in third. The nine-year-old's jockey Jonathan Burke said: "I really enjoyed that. It is a great thrill to ride any two-mile chaser, especially at the top level.

"He gave me a great spin and he jumped super - I suppose the tacky ground just stopped me quickening up from three-out.

"He is better than ever this season, Tom [George, trainer] has done a great job with him. Maybe we could go to Aintree now for the two and a half mile race [G1 Melling Chase]."

Gloucestershire trainer Tom George is putting together a list of places in the G1 £400,000 Betway Queen Mother Champion Chase.

He would love to convert one into a victory, but he was looking happy enough after his Bun Doran finished third in today's running. Winner Politologue (6/1) beat his stablemate Dynamite Dollars (7/1) by nine and a half lengths length, while Bun Doran (33/1) was a further three and a quarter lengths behind in third.

George said of the Johnny Burke-ridden Bun Doran: "He's run another good race and I can't fault it. The ground may have been a bit tacky, and he would prefer slightly wetter or slightly better ground, but he's run a good race

"He's become the fourth different horse I've trained that has been placed in the race in recent years after God's Own, Sir Valentino and Module, and now he's taken their shoes.

"I don't know where he will go next, but I would have thought he would run again this season."

Barry Geraghty (Defi Du Seuil, 4th): "I knew early that things weren't happening the way I'd like it to be. Jumping the fence away from the stands, he landed in a heap at the back of it and that is not him. I tried to nurse him and nurse him but I knew from the back of three out that the game was up.

"Full credit to the winner - he has been in every dogfight. He was the last horse Defi passed here in November and he is a high-class horse. He kept knocking on the door and has got his day."

Daryl Jacob (Sceau Royal, 5th): "He doesn't like that ground. We have tried and tested it before. He is a wonderful horse but he needs proper, nice, decent ground."