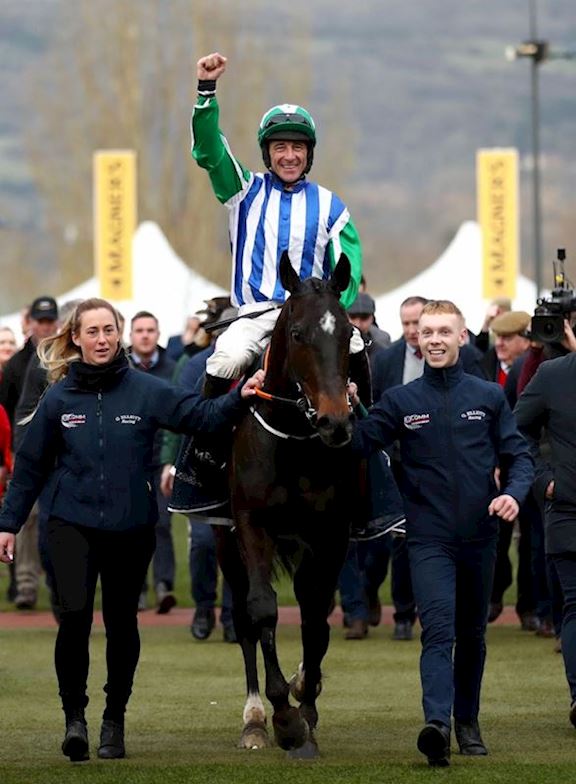 Gordon Elliott claimed a seventh winner at The Festival 2020 when Chosen Mate took the G3 Johnny Henderson Grand Annual Handicap Chase under Davy Russell.
The seven-year-old was the 7/2 favourite, and beat Éclair De Beaufeu - also trained by Elliott - by a length and three-quarters.
Elliott said: "It's very nice to get this trophy - Nicky Henderson [after whose father the race is named] is one of the people you look up to, and I've got an awful lot of respect for him.
"Look, we've had seven winners and second winners - and four thirds - with one race to go. Whatever happens, we've had a brilliant week. It's unbelievable. Both Davy and Sean have given the horses great rides. I'm very lucky to have Davy Russell and Jack Kennedy riding for me - Jack has missed out on a few this week. We've had a great week for a lot of different owners.
"I said the day before that the most important thing with this race was the first four fences. If we could get him over the first four fences in a rhythm, he could win. Thankfully he won."
Chosen Mate is owned by the Northern Four Racing Partnership, comprising David Sharp, Sandro di Michaelis, Mick Conway and Mark Aspinall.
They said: "We know he was a great horse. He was a good hurdler and the plan was always chasing. It all clicked at Gowran a few weeks ago on heavy ground, which we didn't think he liked, and today he was favourite. He travelled lovely through the race and the rest is history.
"This is our first horse with Gordon. We've got another, a juvenile hurdler. Gordon and Davy are great. He's a top man. I've just promised him a trip to Barbados if he won this race!
"Wow, what a performance that was. Davy gave him a wonderful ride; held him up nicely. This is a class horse to have treated that field with such disdain. If Aintree goes head, then Chosen Mate has got to be in the argument."
4.50pm Johnny Henderson Grand Annual Handicap Chase (Grade 3)
1 Chosen Mate (The Northern Four Racing Partnership) Gordon Elliott IRE 7-11-04 Davy Russell 7/2f
2 Éclair de Beaufeu (Gigginstown House Stud) Gordon Elliott IRE 6-11-06 Sean O'Keeffe (5) 13/2
3 Us And Them (Burnham P & D Ltd) Joseph O'Brien IRE 7-11-05 J J Slevin 10/1
4 Greaneteen (Chris Giles) Paul Nicholls 6-11-07 Harry Cobden 5/1
18 ran
Distances: 1¾, 3½, nk
Tote Win: £3.50 Place: £1.60, £1.90, £2.70, £1.90 Exacta: £20.30
Gordon Elliott - 32nd winner at The Festival
Davy Russell - 25th winner at The Festival
Mate's got a friend in Russell
Davy Russell recorded his third victory of The Festival™ presented by Magners 2020 after the Gordon Elliott-trained Chosen Mate justified 7/2 favouritism with an emphatic success in the £110,000 G3 Johnny Henderson Grand Annual Handicap Chase.
Always travelling well, the seven-year-old quickened up in taking fashion in the closing stages to recvord a length and three-quarter win.
Russell was successful earlier this week aboard Envoi Allen (G1 Ballymore Novices' Hurdle) and Samcro (G1 Marsh Novices' Chase) and was registering his 25th winner at The Festival.
Russell said: "Chosen Mate was a very, very good jumper, but we felt that inexperience might just catch him out.
"He can't handle testing ground and it really surprised us at Gowran Park that he went and won.
"I don't know if it was the dry weather but every day, even when he was here, he has kept getting better, better and better.
"I would say that he has grown a foot since he came here - some horses grow and others melt.
"It felt there wasn't a huge rush at the start but we went a good, solid gallop the whole way. I was happy to follow a few, not get detached and not take him off the bridle too early.
"It's hard to know where he will go - that could be his Derby - but he is still a novice, so you don't know.
"I didn't love this place too much last year but, since I was able to walk and talk, my dad made this place to be a magical place. Luckily enough, I grew up to witness the magic."