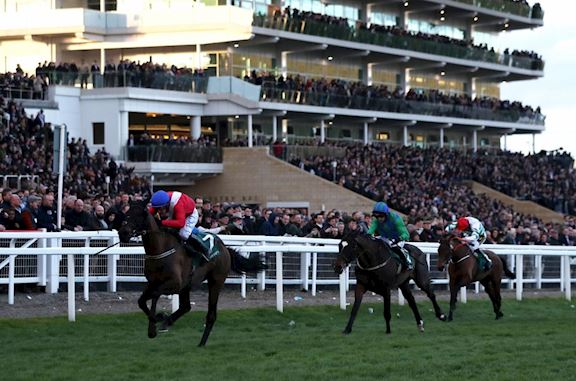 Willie Mullins and his Closutton team have long thought the world of Ferny Hollow and the 11/1 shot demonstrated just why with a smooth success in the £75,000 G1 Weatherbys Champion Bumper.
A £300,000 purchase from the Tattersalls Ireland Cheltenham February Sale in 2019, the five-year-old recorded a two and a half-length success, defeating stable companion Appreciate It, ridden by the trainer's son Patrick and the 15/8 favourite.
Ferny Hollow provided Mullins and Paul Townend with a first winner of The Festival™ presented by Magners 2020.
Mullins was recording his 10th victory in the Weatherbys Champion Bumper and a 66th victory at The Festival in total.
Ireland's champion trainer was delighted to get on the scoresheet at this year's meeting and said: "It's a goal on the stroke of half-time! It's nice to get on the board, anyhow. They are three nice horses - Five Bar Brian (11th) ran very well too. I thought Patrick had it won just after turning for home but could see Paul coming and he won quite easily in the end.
"He ran too freely on his first two runs and putting a hood on him has changed him, together with more drastic tactics - just holding him up and holding him up. He is lovely at home but gets a little bit upset in a race, so I think jumping will suit him a lot better.
"We will probably go for the Champion Bumper at Punchestown and maybe the same for Appreciate It.
"I think everyone was a little bit down as things weren't going right but there you are. At least those three horses ran well and hopefully it is the turnaround."
5.30pm Weatherbys Champion Bumper (Grade 1)
1 Ferny Hollow (Cheveley Park Stud) Willie Mullins IRE 5-11-05 Paul Townend 11/1
2 Appreciate It (Miss M A Masterson) Willie Mullins IRE 6-11-05 Mr Patrick Mullins 15/8f
3 Queens Brook (Noel Moran/Mrs Valerie Moran) Gordon Elliott IRE 5-10-12 Mr Jamie Codd 6/1
23 ran
Distances: 2½, 3¼
Tote Win: £ £13.40     Place: £3.70, £1.90, £3.00   Exacta: £39.10
Willie Mullins - 66th winner at The Festival
Paul Townend - 11th winner at The Festival
Nothing hollow about Ferny's victory
Paul Townend nailed his first win at The Festival presented by Magners 2020 when riding Ferny Hollow (11/1) to victory in the G1 Weatherbys Champion Bumper.
The victory was also a first at the meeting this year for trainer Willie Mullins and a double on the day for Cheveley Park Stud, which is owned by David and Patricia Thompson, and which won the first race on the card, the Ballymore Novices' Hurdle, with Envoi Allen.
Runner-up to Ferny Hollow was his stablemate, the Patrick Mullins-ridden Appreciate It (15/8f) who was beaten two and a half lengths, while in third, a further three and a quarter lengths adrift, was Queens Brook (6/1).
After some frustrating near misses in the previous 13 Festival races, Townend said: "I'm delighted to get any winner here, and this year I'm in the hot seat [following Ruby Walsh's retirement as stable no.1] and it's been a long two days. When you are riding for a team like Mullins there is a fair chance one will come in and it has done.
"Patrick [Mullins, Willie's son] knows all these horses and rides them all, and he had the tactics spot on for my horse today. I was afraid the false start might boil him over a little bit, but we were able to switch off at the back and get a good run through. I had a little bit of trouble down the hill, but when you are on a good horse you can usually get through. I was happy to follow Patrick without getting there too soon, but when I gave my lad a flick he galloped on.
"The horses are running well, but winning here is so special because it's so hard to do so and when you get one you have to appreciate it."
Townend missed a big ride today when Chacun Pour Soi became a late withdrawal from the Betway Queen Mother Champion Chase, and he said: "That's racing and while we've all been in the game a long time it doesn't get any easier when something like that happens. We still have a horse and that's the main thing."
Patrick pleased to see Mullins team on the board
It was a 1-2 for Willie Mullins in the G1 Weatherbys Champion Bumper, but not in the order expected by most, as Ferny Hollow (11/1) held off the 15/8 favourite Appreciate It by two and a half lengths.
The runner-up was expected to go very close to winning this £75,000 contest, after winning the same bumper at Leopardstown last month that produced last year's winner of this race, Envoi Allen - today's G1 Ballymore Novices' Hurdle winner - and go close he did.
Patrick Mullins, rider of Appreciate It and son of the winning trainer, was thrilled with his horse and said: "He is a beautiful horse to ride, settles lovely and is a strong traveller. Everything went right and we just got beaten by the better horse on the day.
"There is lots to look forward to for next year and beyond, with both horses."
Gordon Elliott continued his fine day, saddling third place finisher Queens Brook (6/1), who was beaten a further three and a quarter lengths under amateur partner Jamie Codd.
Elliott said: "She has ran very well, we're delighted - she's a good mare."
Codd added: "We thought she was good, and she is good.  She has come up against two fair horses there and she is going to be a lovely, staying mare for next year."