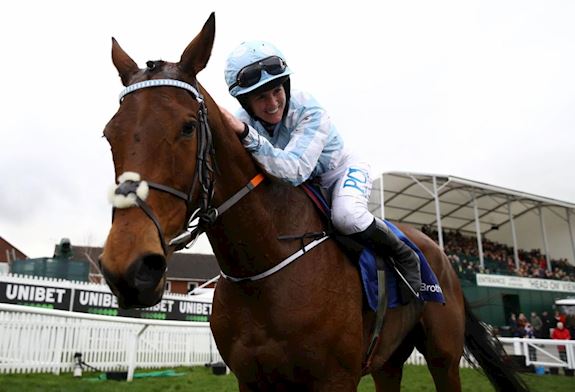 Victory tastes so sweet for Honeysuckle

It was billed as one of the races of the week and the £120,000 Close Brothers Mares' Hurdle served up a treat for racegoers as 9/4 shot Honeysuckle defeated Benie Des Dieux in a thrilling renewal of the G1 event.

Honeysuckle, ridden by Rachael Blackmore and trained by Henry de Bromhead, was always prominent in the two miles and four furlong event and stayed on gamely in the closing stages to fend off the sustained challenge of 4/7 favourite Benie Des Dieux, trained by Willie Mullins, by a half-length.

De Bromhead, registering a 54.25/1 double on the day following Put The Kettle On's 16/1 success in the G1 Racing Post Arkle Novices' Chase, was also enjoying a ninth success overall at The Festival™ presented by Magners.

He paid tribute to Honeysuckle, who is now unbeaten in eight starts over hurdles and is a four-time G1 winner, as well as rider Rachael Blackmore, registering her third winner in total at The Festival.

The County Wexford handler, who also had the option of running Honeysuckle in the G1 Unibet Champion Hurdle 40 minutes earlier, said: "I'm delighted with Honeysuckle - it was a superb performance to go and beat Benie Des Dieux.

"It was [a] very close [decision] in fairness and thankfully we came up with the right race between us. What a ride - my God, the way she got up the inside coming around the last turn. It was two amazing ladies together.

"Paul [Townend, aboard Benie Des Dieux] opted to go the other way and I think Rachael had to sit and suffer, to be fair. Suddenly, the gap appeared and she was gone. It's fantastic. She kind of threw herself at the last - Rachael wasn't sure and left it to Honey and she gave it a lash. She really toughed it out up the hill.

"The way she won her maiden hurdle, she looked nice. We let them try and develop in the track and see if they can work their way up, so you wouldn't be trying to find out too much at home. She always looked nice and was strongly recommended to us after she won her point-to-point.

"We will enjoy to today and see. It's amazing for her to do it. I didn't mind the ground for her, I was probably more concerned for Notebook, and the day she won in Fairyhouse at the start of the season was really testing ground."

Rachael Blackmore, tipped to win this week's Holland Cooper Ruby Walsh Trophy for the leading jockey at The Festival, got off the mark when riding Honeysuckle to victory in the G1 Close Brothers' Mares' Hurdle.

Trained by Henry De Bromhead in County Waterford for owner Kenny Alexander, Honeysuckle (9/4) beat the 4/6 favourite Benie Des Dieux by half a length, and there was a further six and a half lengths back to third-placed Elfile (16/1), a stablemate of the runner-up.

Benie Des Dieux was travelling marginally the best on the final bend, but Blackmore slipped through on the inside and appeared to get first run on the favourite. In typically modest fashion she played down the move, saying: "That was just the way it worked out."

"I was travelling well to the second-last and then became kind of forced in, but I knew that I had plenty of toe at the back of the last. It's a big week and I am delighted. You kind of realise early in the day that these winners are so hard to get, so I am so lucky to be riding all these horses.

"It's every jockey's dream to be in the position I'm in, and Cheltenham is what it is all about."

Nine-year-old Benie Des Dieux, the 4/6 favourite under Paul Townend, won this race in 2018 but fell at the final flight last year when looking the likely winner.

A nonplussed Mullins said: "I think there was a miscommunication turning for home; maybe Robbie [Power, riding the Mullins-trained Stormy Island] thought that one of our horses was behind him, rather than Honeysuckle. It looked like he just gave the winner a huge gap while Paul was going round the outside. Things happen. We won't want to watch that again!

"Our mare [Benie Des Dieux] ran well. Stormy probably didn't go fast enough to take the sting out of it; she needed to go much faster. There wasn't enough pace. I'm a little frustrated, but we've got sound horses and sound jockeys, and hopefully we'll get a turn at some stage. We've got some nice prize-money, we're just not hitting the bulls-eye."

Danny Mullins rode Elfile, also trained by Willie Mullins, into third place, half a length behind Benie Des Dieux, at odds of 16/1.

Danny said: "That was a solid run. We thought her form in Ireland was decent enough to be placed in this and she has confirmed that. A good run behind two very good mares."