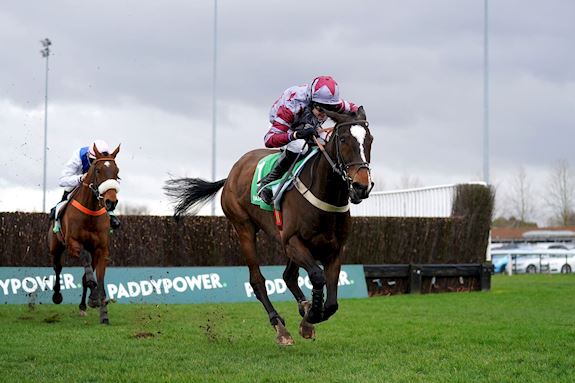 Fusil Raffles, Rouge Vif and Galvin are just some of the big names in action as racing returns to Cheltenham for day one of The Showcase on Friday, 23 October.

Rouge Vif (Harry Whittington/Daryl Jacob, 11st 7lb) is one of the leading fancies for the most valuable race on the card, the £48,000 Bentley Flying Spur Handicap Chase (3.35pm, 13 runners) over two miles.

Market leader On The Slopes (Chris Gordon/Adam Wedge, 10st 8lb) was also in fine form before the Jump season was brought to a premature end, landing a pair of novice handicap chases in great style at Kempton Park in February and March.

Trainer Chris Gordon, who is based in Hampshire, said today: "On The Slopes is in great order and the plan is to run.

"I would like some more rain for him - the ground would preferably be on the easy side of good.

"Cheltenham are due some rain today and fingers crossed they get some. It is tricky at the declaration stage, but we would obviously like to run and he will as long as they get some rain.

"He finished last season really strongly and this looks a nice first target. He is in fine form at home."

Three other contenders also line up in on the back of a win, namely impressive Fontwell handicap scorer Beat The Judge (Gary Moore/Josh Moore, 10st 7lb), Newton Abbot winner Scardura (Neil Mulholland/Sam Twiston-Davies, 10st) and Hatcher (Dan Skelton/Harry Skelton, 10st 10lb), who has been kept fresh since scoring at Southwell in July.

The opening Ballymore Novices' Hurdle (1.50pm, 2m 5f) is one of four usually informative novice contests on the card. Champion trainer Paul Nicholls, who has enjoyed three winners of this race since 2013, has leading claims with wide margin Wincanton winner Ask For Glory (Harry Cobden).

Runner-up to Imperial Aura in the Listed Northern Trust Company Novices' Handicap Chase at The Festival™, Galvin has been on a roll with three consecutive victories over fences, most recently in a G3 event at Tipperary on 4 October.

Chicago Grey captured this race for Elliott in 2010 before going on to provide the trainer with a maiden success at The Festival™ in the 2011 National Hunt Chase, with the same contest reportedly the target for Galvin this term.

Also lining up is progressive mare Clondaw Caitlin (Ruth Jefferson/Brian Hughes). The five-year-old was undefeated on all three of her starts over hurdles last season, culminating with an impressive five-length victory in the G2 Premier Novices' Hurdle at Kelso in February.

North Yorkshire-based Ruth Jefferson said today: "This race looks very competitive, but we have to start Clondaw Caitlin off somewhere and this looks as good a starting point as any.

"She has schooled really well over fences at home and we are looking forward to seeing how she gets on.

"She would like some cut in the ground so hopefully Cheltenham get the rain they are forecast, but she is in good form and is an exciting horse for the season ahead."

The two other handicaps on the card are the squareintheair.com Handicap Hurdle (3.00pm, 2m 5f), which has attracted a maximum field of 20, and the concluding Back And Lay At Matchbook Conditional Jockeys' Handicap Hurdle (5.15pm, 18 runners, 2m 87y).

The Showcase continues on Saturday, 24 October, with a seven-race programme headlined by the £48,000 Matchbook Betting Exchange Handicap Chase (3.50pm, 17 entries) over three miles and a furlong.

The going at Cheltenham is Good (GoingStick reading of 7.4 at 7.15am today).

The forecast is for up to 6mm of rain today. There will be selective watering of the quicker areas of the course as expected rainfall diminishes.

Action on both days of The Showcase takes place on the Old Course.