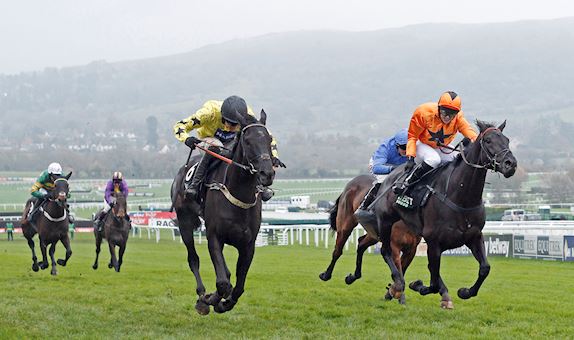 Entries are unveiled today for the £130,000 Paddy Power Gold Cup at Cheltenham on Saturday, 14 November. The G3 handicap chase is the highlight of The November Meeting and has attracted 37 hopefuls in 2020.

Paddy Power returns to back the two and a half mile contest in 2020, having previously been the sponsor from 2003 to 2015 inclusive.

Last year’s contest went to the mare Happy Diva (Kerry Lee), who put a game performance under conditional Richard Patrick to score by a neck from Brelan d’As (Paul Nicholls). If successful again in 2020, Happy Diva would become the first horse to win back-to-back runnings since Bradbury Star is 1993 and 1994 and the sixth dual winner overall.

Happy Diva went close to further success at the Home of Jump Racing last season when runner-up in the G3 Brown Advisory & Merriebelle Stable Plate Handicap Chase at The Festival™.  Her conqueror that day was Simply The Betts (Harry Whittington).  Seven-year-old Simply The Betts was winning his second race at Cheltenham, having previously landed the Timeform Novices’ Handicap Chase on Festival Trials Day in January.

Trainer Harry Whittington was in fine form last week when Cheltenham’s new season got underway with The Showcase, landing the Bentley Flying Spur Handicap Chase with Rouge Vif. Like Rouge Vif, Simply The Betts is owned by Kate and Andrew Brooks.

Sparsholt-based Whittington said: “Simply The Betts is on course for the Paddy Power Gold Cup and one would assume that is where we will go.

“I will talk to Andrew Brooks again, but we have made the entry and that looks to be where we are heading.

“He is a course and distance winner and an exciting prospect for this season.

“I have been delighted with how Simply The Betts has summered – I am thrilled with him to be honest with you.

“We have just done things slightly differently to sweeten him up and he has been working really well at home.

“We are looking forward to this season with him.”

Heading the market at 6/1 with Paddy Power is Saint Sonnet, one of seven entries for 11-times champion Jump trainer Paul Nicholls. The five-year-old is a Listed winner in France and made a very impressive debut for Nicholls when winning at Catterick in February. Saint Sonnet was far from disgraced on his only subsequent appearance when seventh, beaten 13 lengths, behind Samcro in the G1 Marsh Novices’ Chase at The Festival™.

Master Tommytucker, Southfield Stone, who was successful in a novices’ handicap chase over the course and distance at The Showcase last week, and Modus.

Nicholls’ great rival Nicky Henderson has won the Paddy Power Gold Cup once before with Fondmort (2003). The four entries from Seven Barrows are headed by G2 scorer Mister Fisher, who could be joined by Listed-winning mare Casablanca Mix, Precious Cargo and Gold Present.

Gloucestershire-based Nigel Twiston-Davies has sent out four Paddy Power Gold Cup winners, most recently Splash Of Ginge in 2017. His trio of entries for 2020 includes G1 Arkle Novices’ Chase fifth Al Dancer, who made an impressive return to action at Newton Abbot on 11 October, plus recent Bangor victor Good Boy Bobby, who was also a very useful novice in 2019/20, and Count Meribel, who was sixth to Happy Diva last year.

Other chances of the prize remaining in Gloucestershire come from trainers Kim Bailey and Jonjo O’Neill. Bailey has two very interesting entries - Imperial Aura, winner of the Listed Northern Trust Novices’ Handicap Chase at The Festival™, and G2 winner Two For Gold. O’Neill’s entry is Sky Pirate, who shaped well on his return from a lay-off when second at Wetherby earlier this month.

Siruh du Lac was a dual G3 winner at Cheltenham in the 2018/19 campaign but disappointed in this race in 2019 when a well-supported 8/1 chance. He has been transferred to the yard of David Pipe, who saddled the 2011 scorer Great Endeavour, adding to the record eight Paddy Power Gold Cup winners sent out by his father Martin.

Venetia Williams, based in Herefordshire and successful previously with The Outback Way (1999) has four entries headed by Cepage, a G3 handicap chase winner on Festival Trials Day last season, and likely top-weight Aso, runner-up in the 2019 G1 Ryanair Chase at The Festival™.

Weights for the Paddy Power Gold Cup will be revealed on Wednesday, 4 November.

Paddy Power himself said: “The Paddy Power Gold Cup is the contest that really catapults the Jump season into full swing and returning to sponsor the great race felt very much like a homecoming for us.

“With 37 entries this time around, it looks all set to be as big a conundrum as it has even been. Our current 6/1 favourite is the unexposed Saint Sonnet, who looks open to any amount of improvement.

“Paul Nicholls has made no secret that he wants to hit the ground running this season and certainly is no stranger to Paddy Power Gold Cup success, having landed the spoils with Al Ferof and Caid du Berlais in the past. Saint Sonnet is a horse we want to definitely we want to be on the right side of at this stage.”

The 2019 winner Harambe is among 36 entries for the £80,000 G3 Unibet Greatwood Handicap Hurdle, run over two miles on the third and final day of The November Meeting, Sunday, 15 November.

Harambe sprang something of a surprise last year at 16/1 and now has the chance to become the first two-time winner of the race.

His trainer Alan King, who landed the spoils in 2017 with Elgin, has also entered recent Welsh Champion Hurdle victor Sceau Royal and Edwardstone, last seen out when sixth in the G1 Sky Bet Supreme Novices’ Hurdle at The Festival™.

Nicky Henderson, remarkably, has yet to win the Unibet Greatwood Handicap Hurdle. The master of Seven Barrows has engaged Marie’s Rock, who is unbeaten in three starts, and Countister, the sole entry for owner JP McManus.

Paul Nicholls has six contenders, the most of any trainer. They include classy four-year-olds Solo, Sir Psycho and Thyme White.

Song For Someone made great strides last season, winning two of his four starts including the rearranged G2 Kingwell Hurdle at Kempton Park in February. He now has a rating of 153.

Trainer Tom Symonds said: “Song For Someone is in great form and the Unibet Greatwood Hurdle is a possibility.

“He is entered at Ascot on Saturday and could head there, but the Greatwood is also in our minds.

“He is in really good form, and I am delighted with how he looks and how he has done over the summer.

“It is very exciting to have a horse like him in the yard, as he was a real flag bearer for us last season.

“His victory at Kempton was a real highlight and with his rating of 153, we will have to pitch him into some big races. Hopefully, he can have another good season.”

Anemoi has already been in winning action this season, taking a two-mile handicap at Wetherby on 14 October. That was the six-year-old’s first start for 550 days, during which time he underwent wind surgery.

“He may run in a Listed handicap hurdle at Ascot on Saturday and then perhaps go on to the Greatwood, but he has plenty of options at the moment.

“He has actually also been schooling over fences, so we basically want to cover all bases with him at the moment.

“We will continue to see how he schools over fences before making any firm decision, which means the Greatwood could definitely still be on the table."

The five Irish-trained entries include 2019 Galway Hurdle victor Tudor City, one of two possible runners for trainer Tony Martin, and Wolf Prince (Gavin Cromwell), who was last seen out over hurdles when second in the G1 Spring Juvenile Hurdle at Leopardstown in February.

Weights for the Unibet Greatwood Handicap Hurdle will be revealed on Wednesday, 4 November.

“The Unibet Greatwood hurdle has always thrown up quality two-mile hurdlers since it’s inception in 1987; that year Celtic Shot won before taking the Unibet Champion hurdle the following March.

“Space Trucker, Rooster Booster, Sizing Europe and Menorah are all on the Unibet Greatwood Hall of Fame, while in recent years Garde La Victoire and Elgin have won the race, while many other G1 contenders such as Silver Streak, Verdana Blue and The New One have placed.

“It’s no surprise that big race trainers such as Philip Hobbs, Paul Nicholls and Alan King have good records in the Unibet Greatwood hurdle, but what is a surprise is that Unibet ambassador Nicky Henderson has never won the race, given his seemingly perennial ammunition of good two-mile hurdlers. This time around he relies on a pair of mares in Countister (20/1) and Marie’s Rock (12/1).

“Alan King has won the race twice in the last three seasons and his Edwardstone heads Unibet’s market at 7/1, just ahead of the Paul Nicholls trained Thyme Hill at 8/1.

“The Unibet Greatwood hurdle is one of two big sponsorships for Unibet on Sunday, 15 November, as we also sponsor the Grade 1 Unibet Morgiana hurdle at Punchestown, and they form two of six legs in our Unibet Road to Cheltenham series of two mile hurdle races that culminates at the Cheltenham Festival in March with the Unibet Champion hurdle itself.”