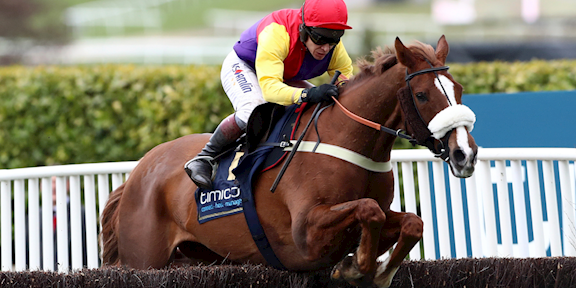 Some fantastic racing at Sandown Park and the Dublin Racing Festival this weekend gave us all plenty to think about with little more than a month until The Festival™ at Cheltenham. Here, Graham Clark takes a look at some of the most impressive performers and how they might fare on the biggest stage in five weeks’ time.

It’s nearly three years since Native River wrote himself into Cheltenham folklore by winning the Gold Cup at The Festival™ but on Saturday he rolled back the years to show he’s just as determined as an 11 year old.

The Colin Tizzard-trained gelding won the Virgin Bet Cotswold Chase at Sandown Park, seven days after it should have been staged at Cheltenham on an abandoned Festival Trials Day card.

Though now in the twilight of his career, Native River proved that with the right conditions he still remains a force to be reckoned with among the best staying chasers currently in training.

His victory over some top class horses, including last year’s Cheltenham Gold Cup second, Santini, and multiple Grade One-winner Bristol De Mai, prompted bookmakers to cut his odds for this year’s Gold Cup from 50-1 to a best-priced 16-1.

Although some 17 lengths further back, for Santini it was an effort which left his trainer Nicky Henderson with plenty of encouragement with nearly six weeks to go until Gold Cup day.

Anyone following the action at Sandown Park on Saturday would also have been impressed by Sporting John. Few would have had him down as a potential Cheltenham Festival winner after a debut third over fences at Exeter, but the manner of his victory in the Virgin Bet Scilly Isles Novices’ Chase has certainly raised eyebrows.

Having finished seventh behind Envoi Allen in last year’s Ballymore Novices’ Hurdle at The Festival on his only previous outing at Grade One level, the Philip Hobbs-trained six year old bounced back to form with a victory in the 2m 4f event that at one stage appeared unlikely.

Holding entries in the Sporting Life Arkle Challenge Trophy Novices’ Chase, Marsh Novices’ Chase and Festival Novices’ Chase, it may be that connections decide to step him up to three miles for the latter, given how well he stayed on at the weekend.

Meanwhile, in Ireland, the Henry De Bromhead-trained mare Honeysuckle stole the show and plenty more hearts on the opening day of the Dublin Racing Festival at Leopardstown on Saturday, when making it 10 wins from as many starts as she successfully defended her Irish Champion Hurdle title.

Having mastered Benie Des Dieux in last year’s Close Brothers Mares’ Hurdle at The Festival, the seven year old set up what promises to be an thrilling clash in the Unibet Champion Hurdle next month with current title holder, and fellow mare, Epatante.

With Epatante entering the race on the back of a defeat in the Ladbrokes Christmas Hurdle at Kempton Park on Boxing Day and Honeysuckle appearing to remain at the very top of her game it could give the advantage to the Irish raider, who enters the race with no questions to answer.

Elsewhere on the card Chacun Pour Soi strengthened his position at the top of the market for the Betway Queen Mother Champion Chase when securing the second leg of a four-timer for Willie Mullins, with a second successive victory in the Ladbrokes Dublin Chase.

Chacun Pour Soi has appeared imperious in his three starts this season and with many of his potential Champion Chase rivals in Britain failing to stamp their authority on the division, the path looks clear for the nine year old to give Mullins a first win in the race.

Irish-trained horses have dominated the Weatherbys Champion Bumper at The Festival since its inception in 1992 and that trend looks almost certain to continue. That is if Kilcruit, who will bid to give Mullins a record-extending 11th victory in the race, puts in a performance anywhere near the level of his 12 length success in the Grade Two Goffs Future Stars I.N.H. Flat Race.

Both of Mullins’ other Saturday winners appear set to play major roles at the Festival with Energumene looking a worthy opponent to Shishkin in the Sporting Life Arkle following his ready success in the Patrick Ward & Company Solicitors Irish Arkle Novices’ Chase.

Gaillard Du Mensil will give the Paul Nicholls-trained winner Bravemansgame plenty to think about in the Ballymore Novices’ Hurdle after taking the Grade One Nathaniel Lacy & Partners Solicitors ‘50K Cheltenham Bonus For Stable Staff Novice Hurdle’ in fine fashion.

And it was another Mullins masterclass on Sunday with more high profile and high quality performers on show. Though the Paddy Power Irish Gold Cup was the feature, it was last season’s Albert Bartlett Novices’ Hurdle winner Monkfish who took our collective breath away, with a flawless display dropped back to 2m 5f in the Flogas Novices’ Chase.

With his ability to handle Cheltenham and its uphill finish already proven and a step back up to three miles very much in his favour, it is going to take something special to prevent the Rich Ricci-owned gelding following up his latest triumph in the Festival Novices’ Chase.

While the re-arranged Cotswold Chase could have a bearing on the Gold Cup there will be some question marks over whether the form of Sunday’s Paddy Power Gold Cup will be quite so reliable come Friday 19th March. While the winner Kemboy, showed determination to hold off his rivals, those finishing in behind him seem likely to fall somewhat short in the prestigious Cheltenham blue riband race.

After the race Mullins suggested that the Paddy Power Stayers’ Hurdle could be an option for Kemboy, which could yet prove an interesting alternative if pursued.

Of those in behind, Minella Indo had been expected to bounce back from a fall in the Savills Chase at the same track in December, but made the kind of jumping errors which would make him vulnerable in the Cheltenham Gold Cup.

Meanwhile, Appreciate It was demonstrating that while he might not have been the number one contender from the Mullins yard for the Sky Bet Supreme Novices’ Hurdle, The Festival curtain-raiser now looks tailor-made for him, especially judging by his victory in the Chanelle Pharma Novices’ Hurdle.

Trips in excess of two miles were anticipated to bring out the best from last season’s Weatherbys Champion Bumper runner-up, but he has thrived over that distance this campaign and with the Supreme often won by a strong stayer it would be hard to look past him.

By his own high standards Gordon Elliott had a quiet weekend, though it did not prevent him from strengthening his hand in the JCB Triumph Hurdle following the impressive victory of Quilixios in the Grade One Tattersalls Ireland Spring Juvenile Hurdle.

With ante-post Triumph Hurdle favourite Zanahiyr already among his arsenal for the race, the Randox Grand National-winning trainer now appears to have another exciting contender for the race in the Cheveley Park Stud-owned Maxios gelding.

Based on this latest performance Quilixios could be more than capable of serving it up to his better fancied stablemate.

One thing is for certain - with just five weeks to go before The Festival gets under way we might not get a better weekend of racing to point us towards some winners than the one we’ve just enjoyed.