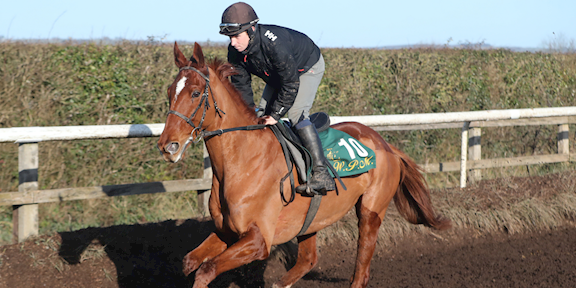 By Nick Seddon and Graham Clark

Willie Mullins looks to have a particularly strong hand in the novice races at The Festival™ supporting WellChild, with a number of favourites across the four days.

Mullins, who was the leading trainer at last year’s meeting, is responsible for the first two favourites of the week in Appreciate It (Sky Bet Supreme Novices’ Hurdle) and Energumene (Sporting Life Arkle Trophy Novices’ Chase).

Energumene’s clash with the Nicky Henderson-trained Shishkin is one of the most anticipated rivalries of the entire week and Mullins has provided a positive update on his charge – who is a 5-2 second favourite with Sky Bet for the Grade One contest at the time of writing.

He said: “I’m looking forward to running him. We bought him out of an English point-to-point and we always knew he could gallop, but to gallop and jump the way he does over fences is really exciting.

“You buy horses hoping they can do something like that, but it usually takes two or three years to find out by the time you’ve won a bumper and gone over hurdles before chasing, and they don’t all turn out like that, so it’s nice to have one like him.”

Asked if he needs to make the running in the race, Mullins replied: “I don’t think it’s essential - he goes his own gallop, but we never said he needs to make the running and we won’t be hanging back. We have no problem with him staying, it was whether he’s fast enough for two miles – so that’s why we’ve tried him over two miles. He’s had two runs and he seems to have plenty of speed.”

Mullins has a whole host of potential runners in the novice contests throughout the week, who he assessed here:

Appreciate It (Sky Bet Supreme Novices’ Hurdle)
“I had him down as a stayer so the fact that he has that turn of foot is good too. He owes me - he destroyed a pair of sheepskin gloves of mine on Saturday evening! But we’re here with him, and his two performances have been good so far, so we’re pleased with him.

“What he did at Christmas was terrific, and I’m wondering whether he was as good in himself at Dublin or was it a better race? He did what he had to when he had to and we all thought he was in trouble turning for home, but when Ballyadam came to him he got the job done – which was the sign of a good horse, and he’s been in great form since.”

Blue Lord (Sky Bet Supreme, Novices’ Hurdle)
“We could see Blue Lord as well. After he won his maiden at Punchestown I was thinking two and a half for him, but when I ran him at Naas he was too free.

“I think his jumping is good enough and maybe we’ll just have a bolder approach to how we ride him.

Franco De Port (Sporting Life Arkle Trophy Novices’ Chase)
“I think he will run here. I know the Irish Arkle is 2m 1f and 100 yards and the Cheltenham version is probably a furlong and a half shorter, but that will probably be run at a very fast pace.

“It’s the obvious thing to me, that we have one horse at the front and the other to hopefully do what he did at Christmas if the race falls apart.”

Blackbow (Sporting Life Arkle Trophy Novices’ Chase, Marsh Novices’ Chase)
“I’m wondering whether I should go for a longer tip with him. I’m not sure if he’s an out and out two miler at this stage of his career. I’m going to do some thinking about the Marsh. “

Saint Sam (Boodles Juvenile Handicap Hurdle)
“We’ve been sort of aiming him for the Triumph, but he has an entry in it. I’ll have a chat with connections. I do know chatting to them after his last run that we were all set for the Triumph but we’ll see what happens.”

Lord Royal (National Hunt Chase)
“He ran a cracker at Navan last time out. He’d been disappointing every time since he won his maiden hurdle (at Clonmel), but he’s best held on to. I was delighted with the way he stayed on from the last (at Navan), and whoever rides him will have more or less have the same instructions.

“I think whoever rides him needs to hold onto him a little longer, and over 3m 6f you should be able to go a little slower pace wise and that will suit him. He’s a beautiful jumper and I think he’ll improve on better ground – he’s not one to give up on and when we get it right he’s one to win a big race down the line.”

Gaillard Du Mesnil (Ballymore Novices’ Hurdle)
“He hasn’t done much wrong. We ran over 2m 6f last time because we didn’t want to go back to two miles with him. I prefer this distance, and I think the pace there will suit us. He’s a horse that I like a lot and I think he’s improving all the time.

“Danny (Mullins) was very good on Stattler (at Leopardstown last month). He got the fractions right and nearly stole the race himself, but when push came to shove, Gaillard Du Mesnil showed what he’s made of and hopefully he’ll be able to do that at Cheltenham too.

Monkfish (Brown Advisory Novices’ Chase)
“It’s been so far so good with Monkfish, and I’m just hoping he can come back and do the same at Cheltenham. He had a gruelling race there last year (when winning the Albert Bartlett Novices' Hurdle) and I just hope he doesn’t remember that.

“Sometimes horses can, but he’s done everything right this season and done it well within his scope. He’s good at home at the moment and he’s one that I’m really looking forward to at Cheltenham.”

Kilcruit (Weatherbys Champion Bumper)
“He ran a terrific race (at Leopardstown in February) and I was as stunned as you were, as I thought the grey horse Ramillies would improve a lot, but I was stunned when I saw Patrick (Mullins) coming and never moving on him.

“He’s a tall horse but he’s very light-framed and I don’t train him that much at all, and Patrick has huge confidence in him as well. Whatever feel he gets is the one we all saw coming down the straight at Leopardstown. He’s been very good since, and he takes very little training.”

Ramillies/Cool Jet/Brooklyn Glory/Grangee/Brandy Love (Champion Bumper)
“I think Ramillies is the horse who’s probably got huge improvement in him. He’s a big strong horse, I’m not sure I’ve seen a rib on him yet but I’m hoping to see one before we get to Cheltenham.

“Cool Jet ran a terrific race after disappointing me in Leopardstown (over Christmas), and then Jodie (Townend) got a great tune out of him down at Thurles, so he’s a horse who’s possibly on the improve as well.

“We’ve a lot of fillies who have run well. Brooklyn Glory has won two and ran well the other day at Leopardstown. Grangee came and won there against all the odds but I think she’s going to improve as well.

“Brandy Love was very impressive at Fairyhouse (in December) and perhaps did too much too soon at Leopardstown and she could be a big runner in that race because of the way it will be run – so we’ve a nice team going there.”

Asterion Forlonge (Marsh Novices’ Chase)
“He is the one that I’m aiming at this point in time. We might decide to stay at home for the Ryanair Chase at Fairyhouse, but maybe with the type of season he’s having he could do both because he’s a hardy horse.

“We haven’t seen his best over fences yet. Things haven’t worked out but there’s a big performance in him. I’ll chat to the Donnellys and we’ll see but I’d say the Marsh would be his race for him.”

Hook Up (Parnell Properties Dawn Run Mares' Novices' Hurdle)
“She ran a cracker at Leopardstown last time. She came from a long way back to finish well and now looking at her against mares, that was a big performance.”

Gauloise (Parnell Properties Dawn Run Mares' Novices' Hurdle)
“I’m not sure we had the right tactics for her at Fairyhouse. We may have given away the initiative but maybe we learned a lot more about her there. I’m hoping that she’ll come back to form with more forceful tactics.”

Glens of Antrim (Parnell Properties Dawn Run Mares' Novices' Hurdle)
“I think she hasn’t shown us her best yet and she has the pedigree to go close in that race.”

French Aseel (JCB Triumph Hurdle)
“Where he came from at Ellmarie Holden’s is only down the road, so he only had to move about 20 miles. They have a similar type of woodchip gallop to what we have, so a lot of things are the same and he’s settled in here well.

“I took the view that I didn’t want to run him in the Dublin Racing Festival because he’d only just arrived here, and to instead wait and go to Cheltenham.

“He started his work three weeks ago doing little bits and now he’s up to full work and I’m very happy with what he’s done. He was very fit the day he won, he jumped very well, so I’m going to take that all on trust and just have him cherry ripe for the day.

“He looked a super horse on the day (when winning at Leopardstown over Christmas), so we’re giving him every chance not to fluff his lines before it and appear there on the day.”

Stattler (Albert Bartlett Novices’ Hurdle)
“I think he’s an ideal type. He jumps, he gallops he stays. He’s had a few runs and I’m happy he’s got what you need for the Albert Bartlett and we’re pleased with him and how he’s been since. “

N’Golo (Albert Bartlett Novices’ Hurdle)
“I don’t know what to do with N’Golo. I’d love to get some good ground and you can probably get good ground on the last day. We’ve entered him in handicaps this morning alongside every novice and he probably wants a bit of a trip in good ground.

“He has the profile of having enough runs under his belt – things might be happening a little slower for there too which might help him as he’s had a couple of bad runs, so we’ll see.”