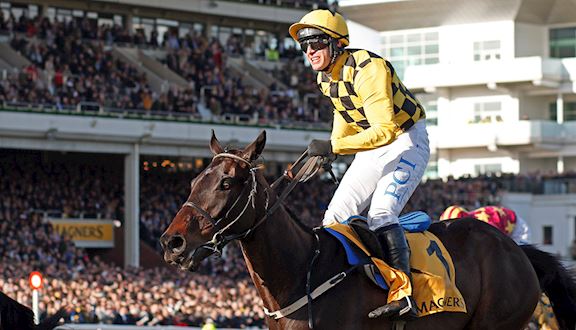 WILLIE MULLINS REVEALS HE IS STEPPING UP AL BOUM PHOTO’S GOLD CUP PREPARATIONS, HOPES SON PATRICK CAN RIDE AT CHELTENHAM AND RUNS THE RULE OVER SOME FESTIVAL CONTENDERS

Willie Mullins plans to step up Al Boum Photo’s preparations for the Cheltenham Festival this week as he bids to become the first horse since Best Mate to win three Cheltenham Gold Cups.

Speaking in a press conference hosted by Horse Racing Ireland ahead of this weekend’s Dublin Racing Festival at Leopardstown, the Closutton trainer revealed that he plans to give the nine year old an away day in the absence of his participation at the two day meeting.

Al Boum Photo made a winning return to action at Tramore on New Year’s Day when claiming the Grade Three Savills New Year’s Day Chase over 2m 5½f for a third season in succession, with a facile 19-length victory over stablemate Acapella Bourgeois.

Mullins said: “He is in great shape. He will do a major bit of work this week because he is not running at the Dublin Racing Festival. I need to get a really tough bit of work into him.

“My focus is to just get him there (Gold Cup). I’m not trying to get sidetracked into any other worry and if he gets there I’m hoping for the best. I will take him away and try and work on grass.

“I was hoping to get to Naas with him yesterday (Sunday) but with COVID protocols you are not allowed gallopers at a race track. I’ve something organised and hopefully it will work out tomorrow.”

Mullins, who with 72 winners is the most successful trainer in Cheltenham Festival history, also hopes current restrictions preventing amateur jockeys from race riding in Britain - due to the coronavirus pandemic - will be lifted ahead of the meeting in order to allow his son Patrick to ride.

He said: “I’m hoping that something can be done. We have eight weeks to go before then and hopefully the figures will be better both sides of the Irish Sea and that governments will be looking at things differently.

“That’s the best we can hope for at this stage. Certainly he would be a top member of our team riding at Cheltenham. He could have half a dozen nice rides, especially after David (Mullins) retiring, that puts him in for a lot more. He is a top guy to have on your team over there.”

Having claimed the leading trainer prize at The Festival for the seventh time last year, Mullins remains confident he will still be able to bring over a large contingent of runners and staff to help him defend his crown.

He added: “We are making arrangements to have things in place ready to bring our usual team but until we see what rules and regulations all we can do is prepare to do the usual stuff.

“We are trying to get a team of staff together. We have plenty to go to Cheltenham we are wondering how to get them back. I do have people that work for me in England when I bring horses across to England so I’m getting them involved as well.

“I tend not to get too bogged down in it as the whole scenario could change in a month or six weeks’ time, that’s what we hope anyhow.”

One horse who will not form part of Mullins’ team at this year’s Festival is 2015 Champion Hurdle winner and 2014 Supreme Novices’ Hurdle hero Faugheen, who has not been sighted since finishing third in last year’s Marsh Novices’ Chase behind Samcro.

He added: “He is just okay now but is not going to run this weekend and we have taken him out of everything. I’d say we will try and prepare him for Punchestown but he is in good shape anyhow.”

Stablemate and winner of the 2018 David Nicholson Mares’ Hurdle, Benie Des Dieux, could make her first start since finishing second in the Grade One prize last year, in the inaugural running of the Grade Two Mrs Paddy Power Mares’ Chase.

Mullins added: “I’d say I will be going straight to Cheltenham with her. That (Mares’ Chase) is the sort of target I had in mind for her all the time. We will see what way both races cut up but we might have old business to attend to!”

Heading Mullins’ runners at the Dublin Racing Festival will be Chacun Pour Soi, who will lock horns with stablemate Min in the Ladbrokes Dublin Chase on Saturday, ahead of trying to give his esteemed trainer a first victory in the Betway Queen Mother Champion Chase.

The pair finished first and second in the 2m 1f Grade One contest 12 months ago with Chacun Pour Soi, getting the better of last season’s Ryanair Chase winner by three and three quarter lengths.

Mullins said: “We got a run into him (Chacun Pour Soi) down in Cork and that paid off well (last time out). I think he is in great shape. I’m hoping he will come on again and he will want to keep improving. He was fragile in the early part of his career but once we got him going he has been fine.

“We’ve always held him in huge esteem. The first day he schooled around Leopardstown with Danny (Mullins) riding him was awesome to watch.

“I sent Danny out to follow the rest and after two fences he was out in front winging them like an old pro so he is a horse that commands a lot of respect around here.”

As for Min he added: “It was the plan (to come here after the John Durkan). We said we would miss Christmas and maybe run him here then go to Cheltenham hopefully.”

On the same card Energumene will bid to set up a potentially fascinating clash with the Nicky Henderson-trained Shishkin in the Sporting Life Arkle next month by extending his unbeaten record over fences in the Grade One Irish equivalent sponsored by Patrick Ward & Company Solicitors.

Mullins said: “He has shown me is good enough to go already (to Cheltenham) as long as he doesn’t make a complete horlicks of it this weekend. I think he has the ability but he must improve from his last run - I’m happy that is where is going at this point anyhow.”

Meanwhile the drop back to 2m 5f in the Grade One Flogas Novices’ Chase on Sunday is expected to be no issue for last season’s Albert Bartlett Novices’ Hurdle winner Monkfish, who is ante-post favourite to register a second Cheltenham success in the Festival Novices’ Chase.

He added: “All this rain will suit him coming this week and I don’t think two miles five will be an issue either. They (Monkfish and Latest Exhibition) are two horses that have a little bit of history and there is never too much between them.

“The way he jumps I don’t think it (the drop in trip) will bother him and the ground will be a lot more testing. It’s a Grade One and we will get a lot of practice.”

Mullins’ hopes of claiming a record-extending seventh victory in the Sky Bet Supreme Novices’ Hurdle appear to rest with Appreciate It, who will attempt to show his Grade One win over course and distance in December was no fluke in the two mile Chanelle Pharma Novices’ Hurdle.

Asked if he was leaning towards going up in trip with him, Mullins recopied: “I was. If we were going down the two mile six route it wouldn’t have surprised me - that’s why I was hugely taken with that run. He seems in great shape.”