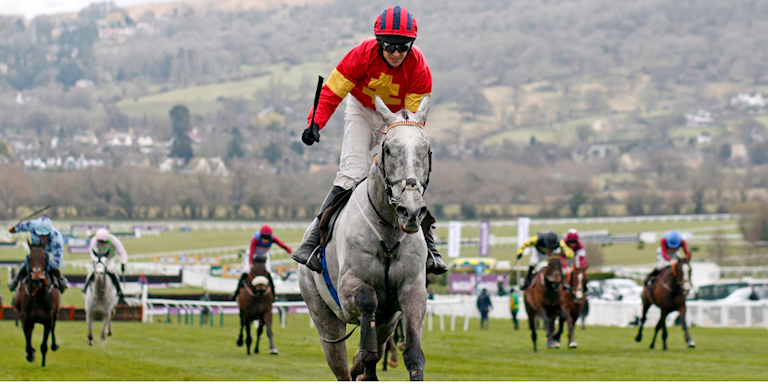 The six-year-old was partnered by Mark Walsh, deputising for the injured Jonathan Moore who also missed Flooring Porter’s victory in yesterday’s Paddy Power Stayers’ Hurdle. The impressive 11-length winner was the 20th this week to be trained in Ireland – a new record.

Cromwell said: “I wasn’t sure how he was going to act on that better ground; he’s been running on heavy ground in Ireland all year, and he’s quite a slow horse, but Mark [Walsh] said he travelled with loads of enthusiasm today. He lined him up good and handy, because we thought he might struggle to travel early, but he showed an extra gear there that he hasn’t shown before, and we know he stays really well.

“I’m not surprised he’s won, but I am surprised by the manner he’s done it in. The ground at Christmas at Limerick [when Vanillier finished second to Farouk D’Alene] was absolutely knee-deep and he got a little bit lost in the middle part of the race and stayed on very well at the finish.

“He subsequently had a small wind op, and went to the Dublin Racing Festival and ran no race. All my horses seemed not to run well at all there - they came home and they just weren’t right - but he’s bounced back great.

Jockey Walsh added: “I was always happy with how he was going. He was probably doing a bit too much in the first half of the race. I got a good beat out of him going out the last time and going to the second last I was always happy with how I was travelling. I could hear nothing was really coming to me and I knew he stayed well so I sent him on about his business into the straight and he stayed galloping.

“It is unfortunate for him (Jonathan Moore) that he has missed out on two Grade Ones and it must have been hard to stand himself down and listen to the advice of the doctors but fair play to him for doing it. I’ve had three seconds this week so to finally get my head in front is a big plus.”

In a separate interview with ITV Racing he added: “One man’s loss is another man’s gain. Thanks to Gavin for giving me the ride, my agent rang me last night and said I was riding him so I’m delighted.

“He won well. I watched his replay where he was second at Limerick and all he seemed to do was stay there. Gavin said to me ‘pop him out good and smart, he can be a bit lazy, keep him up to his work’, but he was the opposite.

“He was in my hands early and for the first circuit, I thought he was doing a bit too much. But in fairness I got a breather here [coming] out the last time (circuit)... I was always happy with how he was travelling and going. I knew he’d stay well into the straight so I just sent him on.”

Colin Tizzard, trainer of runner-up Oscar Elite, said: “He’ll be a lovely horse for next year, when he’s a bit older. We put the tongue tie on today because we need all of the help we can get, and I don’t think it ever has a negative effect.”

Jockey Jonjo O’Neill Junior added: “I’m delighted with that. That’s the kind of horse we thought he was and I don’t think there’s any fluke about it. It’s very hard to win around here but he’s run a very good race and he’s got what it takes to make a smashing chaser. He’s a lovely horse to look forward to.”

Simon Torrens rider of third-placed Streets of Doyen, said: “I’m delighted with that, he ran really well. I didn’t like seeing the rain this morning as I think he’s better on a bit nicer ground, but he’s hardy and he’s a class enough horse.

“He galloped all the way to the line and I’m delighted with that. I’ve been lucky enough this year to get a good few rides this week, five over the last four days, and it’s been great.”