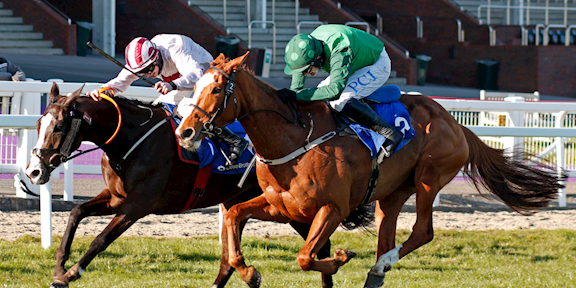 It was a first Cheltenham success for trainer Denise Foster, who was watching back in Ireland after taking over the Cullentra House stables only last week.

Lisa O’Neill, representing the yard, said: “Denise was the first one on the phone and she was absolutely over the moon as it was her first Cheltenham winner and hopefully it won’t be her last.

“Black Tears is a very genuine and consistent mare and this result is great for her owners Aidan and Caren Walsh and John Lightfoot as they have been brilliant supporters of Cullentra House. It is fantastic for them and the whole team here.

“I think Jack Kennedy gave her a great ride. He took the paint off the rail and rode her for a bit of luck. She was beaten just over two lengths in the Coral Cup last year so to get her head in front this is great.

“She had that course form so there was no question about that and she was always going to be staying on having run over slightly further at the meeting last year.

“She showed a great bit of stamina and dug deep and battled hard when she needed to the most. We will get her back and just enjoy today. We will speak to the owners and then decide what to do next.”

Winning jockey Jack Kennedy added: “Black Tears jumped and travelled brilliantly the whole way throughout the race. The line was coming and she was just beginning to get up, and I was praying it wouldn’t come too soon - and it didn’t, thank God.

“Coming into the race, to be honest we’d have been delighted if she finished in the first three. Turning in I had a fair chance that she was going to stay going; it was just a case of hoping the line wouldn’t come too soon.

“It’s been a tough time for the yard and this will be massive for everyone. The amount of effort everyone puts in at home; it is days like these that make it all worthwhile. We’ve kept going and showed that today.”

In an interview with Racing TV, Kennedy expanded on his earlier comments, saying: “I was always happy with the way she was travelling and jumping. I thought I might have been just a fraction too far back on her, but I got a lovely run through down the hill and jumped the second last very well and knew I was kind of in a position to strike then. I was thinking the line was coming just a little bit too soon for me as I was starting to grind her down, but thankfully it didn’t.

“I thought we went an even gallop, we didn’t go over fast but we weren’t going too slow either. If we were going a bit quicker, I would have been happy where I was, but with the even gallop I thought I was a little bit far back, but it worked out anyway.

“I stayed where I was, I had a nice position only for thinking I was too far back the whole way, then at the top of the hill I started to try and find a way though. Thankfully it opened up for me and I didn’t have too much bother getting through.

“She can go to sleep a little bit and just something like that keeps her mind on the game, it probably worked out perfect. She was very good at Punchestown and that was a nice way to be coming into today.

When asked what this success will mean for Cullentra House given recent events, he added: “It’s unbelievable. We’ve gone through a tough time, everyone has stuck together and we’ve pulled through. That just goes to show what a team we have at home that we are able to keep going. It’s brilliant.

“When the Cheveley Park horses left the whole team was down, but we’ve all just had to pick ourselves up and get going again.”

Trainer Willie Mullins said of runner-up Concertista: “No excuses. She had every chance. It’s a great win for Sneezy (Denise Foster).”

Jockey Paul Townend added: “She ran a good race but just flattened out a bit near the finish.”

A further two and three quarter lengths back in third was Roksana, winner of this contest in 2019.

Her trainer Dan Skelton said: “It was another good run from her and she’s super consistent. They didn’t go a great gallop up front, but we’ve no grumbles as she ran very well and jumped beautifully.

“She got herself to the front two out which is unknown territory for her as we normally like a faster run race, but we knew the dangers of dropping back to two and a half miles and at the end of the day she’s run well.

“She’s not quite got the speed of the front two turning in, but that can always happen over two and a half and I’m still glad that we’ve gone for this race. I think the ground will be drying out a lot for her come Thursday, but she’ll now go for Aintree.”

Jockey Harry Skelton added: “I’m delighted with her. She ran an absolute blinder and there were just two quicker ones on the day. But I’m very proud of her and she’s a top mare. She’ll probably go to Aintree next and we’ve got a chance there hopefully.

“Three miles is probably her trip now, but you run the mare in the race that you think you’ve got the best chance in. We’ve run against Paisley Park before and we can beat him, so we’ll go to Aintree now.”