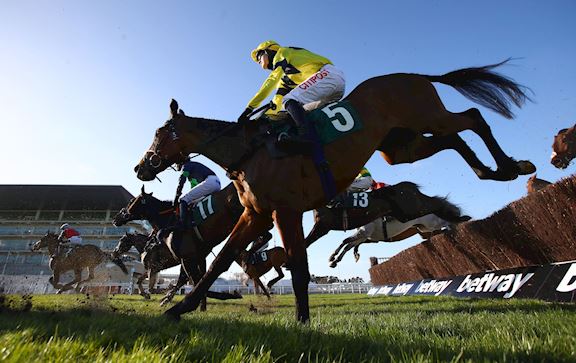 The 14-1 chance held on from the fast-finishing Entoucas to score by a short-head and O’Neill, who was celebrating his 27th Festival winner, was quick to praise jockey Nick Scholfield.

He said: “It was great and Nick gave him a fantastic ride really. He jumped really quick and slick and everything went right really. He likes it here. He stays further but he is much better in a fast gallop over two miles.

“A good gallop in a good handicap plays into his hands really. He travels away and does everything nicely. I thought if he couldn’t win this he definitely couldn’t win an Arkle. I thought it was a good run at Warwick the last day when he was second behind Allmankind and the ground was a bit on the softer side.

“He likes the track here and it all went well and the plan came right. He might have to take that (step up to the next level) that’s the bad news, but who knows? He is in grand form and he was in great form coming here. He is a grand honest horse and he jumped really well today and everything went right.

“As Nick said he was there probably a little bit too early but when the gaps come here there is no point waiting. A winner at Cheltenham is what we all come here for and when it comes right it is all fantastic. It is great for the staff in the yard and they work for this week. To have runners is fantastic annd to have a winner is even better.”

Asked if Skky Pirate had surpassed all expectations, O’Neill replied: “He has to be fair. He just came in a different horse this year and I can’t give you an answer but I’m delighted he did and it has just gone right for him.

“It is brilliant for Nick as he was out with a broken leg. He came back and rode a winner at the weekend and that was great really and that gave him a bit of confidence. Martin (Tedham, owner) had never had a Cheltenham winner until this fellow won for him earlier on in the season so to have a Festival winner is even better again. I’m sure he will have a few lemonades tonight!”

Winning jockey Nick Scholfield added: “This is what it’s all about, and I’m very grateful to Mr Tedham (owner) and Jonjo for giving me the opportunity, because other people have been winning on him (since his injury) and they stuck with the faith, and I really appreciate that.

“Although Sky Pirate is still a novice, he jumped electric and never missed a beat. We had a great run round the outside and the gap opened coming to the last. I landed at the back of it and thought, ‘I’m here a bit soon’, but I’m thankful to the horse who kept pulling it out. He had every opportunity to stop up the run-in, but he’s just held on, which is brilliant.

“The idea of taking on Shiskin in the Arkle was a bit scary, so we opted for a handicap instead and it’s worked out wonderfully. Jonjo was adamant about going to this race and it’s proved to be right. Credit to the horse for carrying 11st 6lb like that in a handicap.

Brendan Powell, representing Joseph O’Brien, trainer of runner-up Entoucas: “Mark said everywhere he went coming down the hill he was in a pocket, and when he tried to get out something was keeping him in. The winner has fought it out well, but probably the mistake at the second last has just cost us a couple of lengths. He’s a horse that stays two and a half miles, and we were staying on well.”

Entoucas’s jockey Mark Walsh added: “He ran well, I was delighted with that. I missed the second last which wasn’t a help, but I’m still delighted and we ran a cracker. We could have got there (if it wasn’t for that mistake), but we’ll go home and freshen up and he’s certainly going the right way.”

Venetia Williams, trainer of the third to finish, Ibleo, said: “Sky Pirate beat us before here and I was hoping all week that Jonjo would run him in the Arkle. You have to be delighted with him, and if the ground had been what we’ve been running on all winter it might have been different.”

Charlie Deutsch, rider of Ibleo, added; “He’s quite cold early on and never sets off quick. I was squeezing away but we couldn’t keep up, but his jumping is good and he always finishes well.”