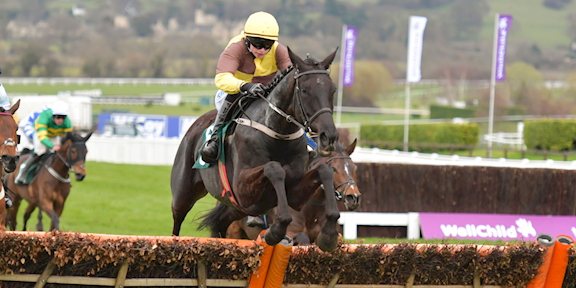 The Festival™ supporting WellChild concluded with the Martin Pipe Conditional Jockeys’ Handicap Hurdle, which saw Galopin des Champs hold off the challenge of Langer Dan by two and a quarter lengths.

It was a sixth win of the week for trainer Willie Mullins, enough to secure the Leading Trainer Award for an eighth time, narrowly defeating Henry de Bromhead who also trained six winners but had fewer placed horses.

It was a first Festival winner for jockey Sean O’Keeffe and Willie Mullins said: “I had two good riders in the last. Sean was very cool on the horse for a conditional rider and he did everything right.

“He got away early, saw that our other horse was in front and slotted Gallopin Des Champs in about fourth place and he bided his time to hope that it would open up for him. He still bided his time and waited and waited which is a real sign of a good pilot in the making.

“I had him entered in all the handicaps and we divided them up as best we could and we had two good jockeys picked and we thought lets book the two jockeys on the two horses we thought had a chance.

“Gentleman De Mee just ran too free but he is a good horse, but Gallopin Des Champs looks a real chaser in the making. Just the way he jumped I was very pleased with the ride and the horse as he settled and jumped so well.

“The trip didn’t cross my mind as I’m always assuming our horses will get two and a half or three.”

Runner-up Langer Dan missed out on a £50,000 bonus offered by bookmaker Paddy Power. The five year old won last Saturday’s Paddy Power Imperial Cup, with the sponsor offering £50,000 to connections if the winner of that contest went on to score in any race at The Festival.

Langer Dan’s trainer Dan Skelton said: “Fair play to the horse - he’s turned out quickly and I didn’t know what to expect, but I don’t think you’ll see a better ride to finish second around Cheltenham. That was great from Lorcan and great from the horse - we just got beat, simple as that.”

Jockey Lorcan Williams added: “He’s travelled well throughout the race, the winner has obviously done it very well but he’s only run last week in the Imperial Cup so that may have taken a little bit out of him.

“He’s run an absolute cracker, I don’t think I could have done anymore. I saved enough and produced him at the right time, I just got beaten by the best horse on the day. It’s very hard to win round here as we know, especially when he’s already won an Imperial Cup, but it was an absolutely brilliant run and I’m glad he’s come home safe and sound.”

Brendan Powell, representing Joseph O'Brien, trainer of third-placed Floueur said: "We've only had him a couple of weeks but he's a nice big horse who ran in a couple of chases and didn't take to it, probably because he was a big baby.

“He got squeezed a bit coming down the hill when flat to the boards, but he finished well and wants further. Punchestown will suit him."