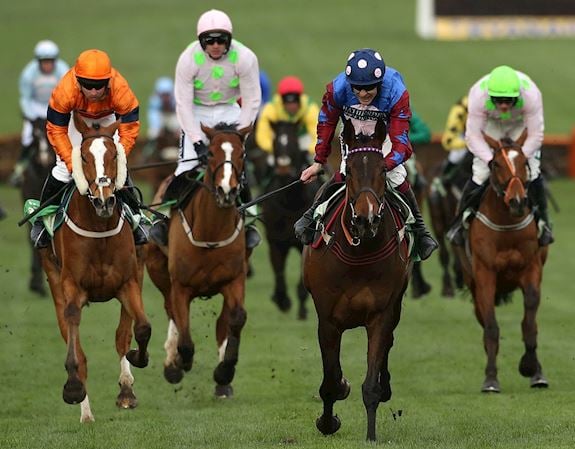 Potential landmarks at The Festival™ supporting WellChild in 2021

Vincent O’Brien won no fewer than ten divisions between 1952 and 1959, when the race was regularly divided.

The field of eight is the smallest in the race’s history. The previous smallest field was nine in a division of the race in 1950.

None of the jockeys riding this year has ever won the race. Jonathan Burke (Not So Sleepy) and Danny Mullins (Saldier) have yet to ride a winner at the meeting.

Willie Mullins (Monkfish) and Nicky Henderson (Dickie Diver) have the opportunity to become the race's most successful trainer outright, with five wins. They currently share the lead with Fulke Walwyn.

Willie Mullins, the Festival’s leading trainer with 72 winners, has yet to win the Betway Queen Mother Champion Chase. He saddles favourite Chacun Pour Soi, who was favourite when a late non-runner 12 months ago.

Paul Nicholls could become the most successful trainer of all-time in the two mile contest if Politologue can repeat his 2020 win. The Ditcheat handler has been successful five times in the past and currently shares the record of five wins with Nicky Henderson and Tom Dreaper.

Dual Randox Grand National winner Tiger Roll will join Golden Miller (five wins in the Gold Cup) and Quevega (six wins in the Mares’ Hurdle) as only the third horse to win five times at The Festivalh™ if he can gain a third win in the Glenfarclas Cross Country Chase, which he won in both 2018 and 2019. He also won the JCB Triumph Hurdle in 2014 and the National Hunt Chase in 2017. Altior is also currently on four, but misses the Queen Mother Champion Chase following a bad scope.

Susannah Ricci will be the first owner to have three Ryanair winners if Min repeats last year’s win, having also won with Vautour (2016). Trevor Hemmings has also won twice, with Albertas Run in 2010 and 2011.

Paisley Park, the 2019 winner, will be bidding to become just the third horse to regain the Paddy Power Stayers’ Hurdle crown (since it was introduced with its current conditions in 1972). Crimson Embers scored in 1982 and then again in 1986 while 2005 winner Inglis Drever retuned to win in 2007 and 2008.

Willie Mullins has won all five runnings since the race was introduced in 2016. He has four runners in 2021 - Gauloise, Glens Of Antrim, Hook Up and Pont Aval.

Willie Mullins has dominated the two mares’ hurdles and looks set to be well represented in the first running of the Mrs Paddy Power Mares’ Chase, with hot favourite Elimay as well as Colreevy, Salsaretta and Cabaret Queen. Mullins has won nine of the 13 runnings of the Close Brothers’ Mares’ Hurdle and all five runnings of the newer Parnell Properties Mares’ Novices’ Hurdle.

Hurricane Fly hands Willie Mullins a first Champion Hurdle success. It is also a first victory in hurdling’s biggest prize for jockey Ruby Walsh, who would go on to win the contest a joint-record four times. Hurricane Fly went on to win the Champion Hurdle again in 2013, becoming only the second horse to regain the Champion Hurdle crown after Comedy Of Errors (1973, 1975). A tremendous finish to the Cheltenham Gold Cup sees Long Run come home in front of 2008 hero Denman with dual winner Kauto Star (2007, 2009) taking third.

For the first time since World War II, The Festival™ does not take place due to the foot and mouth epidemic.

Garrison Savannah hands trainer Jenny Pitman a second Cheltenham Gold Cup, holding off the late challenge of French raider The Fellow by a short-head. The Fellow would also finish runner-up in 1992, again going down by a short head. He was fourth in 1993 before finally taking the honours in 1994.

Trainer Peter Easterby enjoys a rare double, taking both the Champion Hurdle and the Cheltenham Gold Cup. In the Champion Hurdle, Sea Pigeon wins for the second year in succession, with John Francome in the saddle deputising for the injured Jonjo O’Neill. At the age of 11, he is the joint-oldest winner ever of the contest. In the Cheltenham Gold Cup, Little Owl takes the honours. Easterby also trains Gold Cup runner-up Night Nurse, winner of the Champion Hurdle in 1976 and 1977. The 13-year-old Willie Wumpkins wins for the fourth time at The Festival™ as he lands what is now the Pertemps Network Final for the third year in succession. He also won the race now known as the Ballymore Novices’ Hurdle in 1973.

It is a changing of the guard in the Champion Hurdle as exciting youngster Bula takes the honours.  Persian War the winner in 1968, 1969 and 1970 is a game runner-up. The Cheltenham Gold Cup goes to L’Escargot for the second year in succession. In 1975, as a 12-year-old ,L’Escargot won the Grand National and is the only horse alongside Golden Miller to win the two biggest races in the chasing calendar.