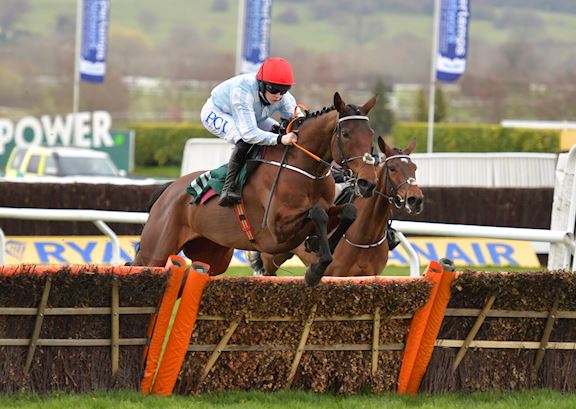 Rachael Blackmore admitted she was “overwhelmed” after claiming her fifth winner of the week aboard Telmesomethinggirl in the Grade Two Parnell Properties Mares’ Novices’ Hurdle.

The daughter of Stowaway came home five and a half lengths clear of stable companion Magic Daze to give owner Kenny Alexander a second win in three days, after Honeysuckle’s victory in Tuesday’s Unibet Champion Hurdle.

And Blackmore told ITV Racing: “This is overwhelming to be honest. I didn’t think I’d enjoy chatting to you so much! It’s unbelievable, unbelievable.
“Henry has done an unbelievable job with her, he always thought a lot of her and she showed it today. She’s got speed as well as anything else, jumped brilliant everywhere and settled better than she has done before, so incredible.”

When asked what her success this week means to her deep down, she said: “I don’t even know myself and I wish I could give you something really good. I’m genuinely just so overwhelmed by these last few days. It’s all about the horses you’re getting on and I just feel so lucky to be riding for the people I’m riding for.”

Trainer Henry de Bromhead, who was celebrating his fourth victory of this year’s Festival, also praised Blackmore for being “the ultimate professional”. Speaking at the post-race press conference, he said: “As I said yesterday the horses are flying the jockeys are flying and it’s been brilliant.

“We are very lucky to have good mares like them and getting tremendous support from our owners. I thought she had a chance but on ratings I thought she might struggle a bit with some of the other ones but I hoped she would have a squeak.

“Magic Daze - I was delighted with her as well. She was second and ran a cracker having made all, which is a hard thing I think to do in this race. It was a very good race (the last day) and Rachael felt she would come on for the run as it was her first run for a while and we are delighted.

“I’m delighted for (Rachael). She is such a good rider and an ultimate professional and she is brilliant to work with. She earns everything she gets.

“It was two miles two last time and the one concern today might have been the trip and that might have been a bit sharp for her around here. She has won over two and a half so she is pretty versatile. It would be a nice target to go for (mares’ novices’ hurdle at Fairyhouse). It’s on April 3rd and it might all be a bit too soon but we will enjoy today anyway.”

Also on ITV Racing, de Bromhead said of runner-up Magic Daze: “I’m delighted with her - that was a savage run. I love her. My wife Heather and Mags O’Toole bought her and they both loved her after she’d won her point to point.

“Barry O’Neill (the champion Irish point to point jockey) actually recommended her to us and I love her. She’s a lovely mare and to do what she did there and hang on for second after going the gallop she went was savage. I’m looking forward to putting her over a fence next year.”

Magic Daze’s jockey Robbie Power added: “That was a cracking run. She’s got a really high cruising speed and travelled very strongly and maintained it. The winner’s quickened up past her, but she’s galloped all the way to the line. She’s a very promising mare and another promising mare that Henry will have to go chasing with.”

Brendan Powell, representing Joseph O’Brien, trainer of third-placed Mighty Blue, said: “She ran a super race and is still a maiden. She’s tough, she’s honest and she’s versatile, as she’s 105-rated on the Flat. She’s not the most natural of jumpers and she’s missed the second last and the last, but she’s more relaxed now and she’ll win her maiden hurdle.

“She was in all summer and in all winter, so we’ll see now whether Joseph gives her a break and then comes back for some of those mile and six handicaps or mares’ Listed and Group races.”