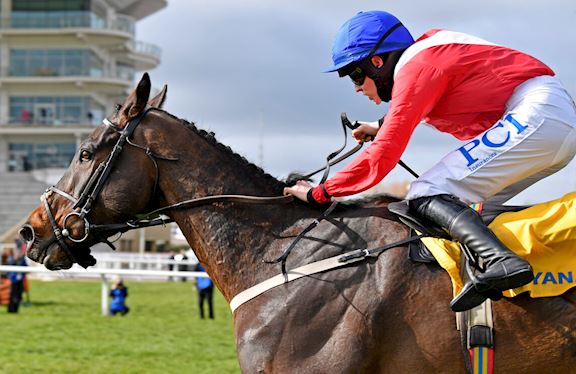 Willie Mullins admitted he was “gobsmacked” by the front-running performance of Allaho as he cruised to a 12-length victory in the Ryanair Chase, giving jockey Rachael Blackmore her fourth Grade One success of the week.

The 31 year old won the Unibet Champion Hurdle with Honeysuckle on Tuesday, before adding the Ballymore Novices’ Hurdle with Bob Olinger and the Weatherbys Champion Bumper with Sir Gerhard yesterday.

After winning the Ryanair Chase, Blackmore described her week as “out of this world” and said: “It’s incredible! I’m very grateful to be getting these opportunities. He put in a fair performance; he jumped and galloped everywhere. I never felt like I was out of my comfort zone anywhere. It was fantastic.

“I was happy to let my lad gallop and jump and it worked today. He was happy, travelling underneath me and comfortable [in front]; when they aren’t comfortable and you are forcing them, that’s when you are maybe going too quick.

“Every horse is different and I was just letting him gallop and jump at the speed he wanted and trying to get breathers into him in a few places. I got a great thrill riding him. It takes a lot of the complication out of it, I suppose, with instructions like that. It’s fairly black and white and if it comes off, it’s fantastic.

“When you are riding for two powerful stables it makes a jockey’s job a lot easier, and I can’t tell you how grateful I am to be in this position and be getting these types of chances. You have to have the engine underneath you - it’s very hard to do it up that hill without the engine.

“How would I describe this week? Out of this world.”

Blackmore later told ITV Racing: “For a jockey, when you’re getting legged-up on these kind of horses for Willie Mullins and Henry de Bromhead, they just know their job, it’s fantastic.

“He was just jumping and travelling. He’s just a real galloper and that’s how I rode him. It was either going to work, or it wasn’t, and look, it worked! It’s fantastic. Fair play to Paul Roche, he was giving him a pat over the rail there he rides him out a lot, and Holly and Vince who look after him at home, so it’s brilliant for everyone and it’s an unbelievable position I’m in.”

When asked whether having a degree in equine science makes her cleverer than everyone else, she replied: “No, I’m a hell of a lot luckier!”

“It was incredible, he jumped and he galloped. He was a dream to ride. Obviously stepping him back was the thing to do and he’s just able to gallop and jump, and he was able to keep up that relentlessness. It was only when I came back in and people were saying that we went some gallop, but he felt in his comfort zone everywhere. It was fantastic.

“It’s the sheer ability of the horse to be able to do that [perform and jump at that pace], it was a dream ride. I didn’t feel out of my comfort zone at any stage, it was brilliant.

“It was a disappointing start to the day for [the Thompson family], but look Envoi Allen is up and he is ok and so is Jack and that’s the main thing. They will live to fight another day. I’m very grateful to them for being so supportive of me and giving me the opportunities on their horses.”

Looking ahead to A Plus Tard in tomorrow’s WellChild Cheltenham Gold Cup, she added: “He has an unbelievable chance. Al Boum Photo is the horse to beat in it and we will be giving it our best shot.”

Speaking at the post-race press conference, trainer Willie Mullins added: “It was an awesome performance I thought. I thought Min would go with him every bit of the way but his jumping was just so slick and Min’s jumping was not up to scratch and we might have to look at that.

“Allaho did everything right. The first thing I did when Rachael come back in was lift her number cloth to see if the lead bag was in there as it looked like Allaho was just carrying Rachael around there! He was just awesome. His galloping and his jumping, if you put it together I was hoping he could do that over three miles but if he is only a two and a half mile horse that will do me.

“Watching him at home all the time everyone has felt he is a galloper and a jumper and that you don’t need to hold him up. I felt that he could stay but that trip suits him better. I was sort of as gobsmacked as anyone else watching it as I fully expected the two horses in front to probably collapse coming to the third last and if they did you would have said they have gone too fast and took each other on but that is their style of racing and that was the plan from the start and we just had to hope one of them would be good enough.

“We will see what races are there for him and maybe over a less demanding track you would look at a King George with that style of running. We will have a word with connections Cheveley Park and see what they would like to do. I think it’s there to be discussed (trip).”

Brendan Powell, representing trainer Joseph O’Brien, said of runner-up Fakir D’Oudaires: “Mark (Walsh, jockey) said it was an unbelievable gallop from start to finish. The winner has done it well, but what this lad loves is unraceable heavy ground. His ideal is when they call an inspection in the morning and it’s 50-50, as he’d just gallop through a bog.

“He’s run a cracker to be second, and you couldn’t be happier with him, but the winner has always been a good horse on his day. You’d love to see him win around here, and one day I’m sure he will as he’s only six still. This is his ideal trip, but I don’t think Aintree would be for him.”

Jockey Mark Walsh added: “It was an end-to-end gallop and we were flat out the whole way, but he ran on well and has run a good race.”

Danny Mullins, rider of third-placed Tornado Flyer, said: “He was back to the horse we know he can be there, and hopefully he remains consistent. Two and a half miles is probably his trip.”

Amy Murphy, trainer of fourth home Kalashnikov, said: “That was a huge run and we’re absolutely delighted with him. He jumped the last in second and just probably tied up a little bit up the hill, but he was off the bridle most of the way so I think he was very brave.

“Jack (Quinlan, jockey) was saying he’s never been as quick in his life, so it was obviously a very fast run race and every credit to the winner. He was unbelievable to watch out there, but for our lad to be back to what looks his best is a massive team effort and he was very brave all the way round.

“Looking at the way he was off the bridle today, I think we’re probably better going three miles at Aintree rather than two and a half, but we’ll keep all options open.”