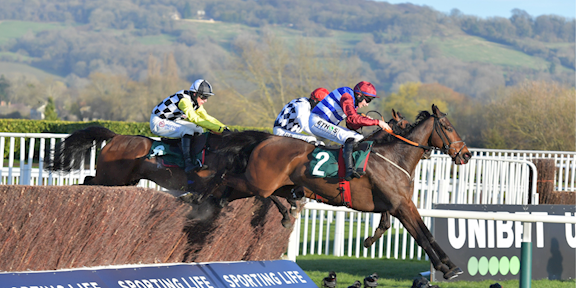 The concluding race on day one of The Festival™ supporting WellChild, the Grade Two Sam Vestey National Hunt Novices’ Chase, went to Galvin, trained in Northern Ireland by Ian Ferguson.

The 7-2 chance saw off Next Destination by a length and a half after Jack Kennedy delivered him to challenge after jumping the last.

Kennedy, riding his second winner of the day, said: “I couldn’t have asked for much better. He made a couple of little mistakes, but he jumped very well for most of the race and travelled very well, so it was fairly straightforward for me.

“This was the plan for a long time, so it’s great that it’s paid off. It’s nice for Ian Ferguson - he pre-trained the horse before he went to Gordon Elliott’s, he knows the horse very well so he knows what to be doing with him to keep him comfortable.

“If anyone saw the horse walking out through the chute to the track, they’d see that he can get fairly wound up. Everyone has done a great job in keeping him relaxed.

“I think he could be a National horse, something along those lines. He has a bit of class and he stays very well, so I think the likes of the National would be right up his street. It’s great to have two winners. To get two on the first day is brilliant.

“I’m looking forward to Grand Roi tomorrow in the Coral Cup; he has a nice chance, and obviously Envoi Allen. Then Minella Indo in the Gold Cup; the ground is drying out and if we don’t get rain, it probably won’t suit him that much, but if it were to come up anywhere soft, I’d give him a great chance.

“You would only notice the lack of crowds walking out and walking back in. When you cross the line it’s still the very same feeling when you ride a winner. It’s a shame there’s no one here but it’s great we can keep going with it, and I’m delighted to get a couple of winners.”

Trainer Paul Nicholls said of runner-up Next Destination: “He’s run an absolutely blinding race. For the horse to come back after the problems he’s had is a credit to him and he’s run four fantastic races (for me so far), so I’m sure there’s a really nice race in him at some point.

“I think we made the right call. I think with the drying ground three miles might have been a bit too sharp for him and he stayed on really strongly there, which suggests that in the future you never know we could even have a Grand National horse next year.

“That’s only his fourth run, so it’s whether we look at the novices’ chase at Aintree. That’s his only option, but he’s had a hard race today and if we didn’t run again this season we’d look towards something the Ladbrokes Trophy at Newbury next year to start him off.”

Jockey Harry Cobden added: “He ran a blinder. He jumped very well and travelled and did everything right. He winged the second last fence and absolutely pinged the last and I suppose we’ve just probably been beaten by a better one on the day.

“He’s got bags of stamina. I thought after the last for a second that I might come back and get him but Galvin’s a class horse and every time I got to him he’s come again.”

Cobden, who is challenging to be champion Jump jockey in 2020/21, continued:  “Obviously, coming here is not helping because it’s so hard to come here and ride winners, but I’ve got plenty of time yet and both Paul (Nicholls) and Colin (Tizzard) have got plenty of horses after this meeting that will go here, there and everywhere, so we’ll give it a good crack.

“It’s one of those things that I’ve had on my mind over the last 12 months and if we can do it that’s great, but there’s always another year.”

Alice Plunkett finished her shift with ITV after race six but she would not have missed the concluding Sam Vestey National Hunt Challenge Cup for the world as her mother-in law Marietta Fox-Pitt had Snow Leopardess, whom she both owned and bred, running.

The grey did her proud too, racing handily in the chasing group throughout and keeping on for fourth.

Plunkett was thrilled and said: “That was absolutely brilliant. Snow Leopardess is an amazing mare, because she’s broken down twice and had a foal, and they kept bringing her back. Charlie (Longsdon) has done a brilliant job with her, and it’s so sad that Marietta couldn’t be here to enjoy her Festival runner.

“She’s an amazing lady. She’s 80 now and has had all sorts of winners, including a ‘Grand Steep’ winner.  I think Snow Leopardess is from the sixth or seventh generation she’s bred, and the brother Parramount won the bumper at Stratford yesterday.”