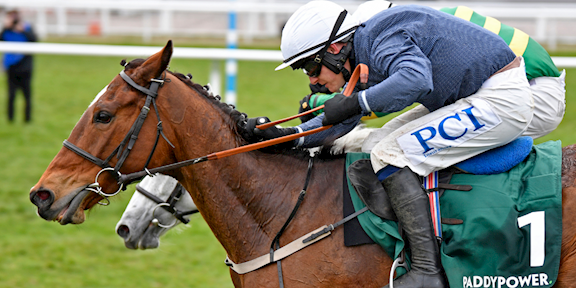 Willie Mullins watched Colreevy and stablemate Elimay secure a one-two in the inaugural staging of the Grade Two Mrs Paddy Power Mares’ Chase before admitting he was relieved after some disappointing performances from his horses on the final day of The Festival™ supporting WellChild.

The contest, staged over an extended two and a half miles, saw Colreevy hold off the strong challenge of the JP McManus-owned Elimay by half a length.

And Mullins told Racing TV: “A good few of mine disappointed today and we were just getting a little worried, so at least these two showed their form. Colreevy was very brave, they are two brave mares to do what they did. Really delighted for the Flynns, they’ve had winners here before.

“Poor JP it’s just not his day, he was telling me before the race, and unfortunately not again [in that race either]. They ran their hearts out. Two really good jumpers and both jockeys wanted to make use of that and they did.”

Reflecting on other performances across the day, he added: “It was a great win for Will Biddick [in the previous race, the Foxhunter], so congratulations to him. I think we beat him in a photo finish here a few years ago with Patrick riding against him. So everyone gets a turn.

“Billaway ran a cracker, Al Boum Photo ran a cracker and a few of the handicappers disappointed me. I suppose I was hoping Ganapathi might, but it was probably a big ask for a horse’s fourth or fifth run over hurdles, but we took a chance at running him in the handicap instead of the novice hurdle and it might not have been the right decision.

“Paul had him [Al Boum Photo] in the right position, the winner has good form around here. A Plus Tard is a Gold Cup winner probably waiting to happen as well. He has been campaigned over shorter trips and now he’s a horse that’s getting his trip and you can see the improvement.

“So with our fellow, it’s hard to come back here. That’s four or five years he’s come back here, he ran a great race and we are very happy and very proud of him. He missed the third last and the fifth last and the first thing Paul said to me when got down were that the two fences that won it for him last year, cost him this year. So that’s the way it goes.”

Paul Townend said of Colreevy: “She’s very tough. She’s only a novice, but you wouldn’t think that from the way she jumps. She was very keen with me early, down the middle and back on to the racecourse proper, but I elected just to let her run and attack her jumps, and I thought myself and Mark [Walsh, riding second-placed Elimay] had a good duel from the long way out.

“It was nip and tuck, but I felt that when we rounded the bend I still had a life. My fear was we’d gone at it and something was going to come late at us.

“I was disappointed with the way Colreevy ran here last year in the mares’ hurdle, but since she jumped a fence it’s brought about improvement on her. I’d imagine the drop of rain definitely helped her.

“She was a Grade One winner at Christmas and she’s a very valuable mare. We’ll leave it up to Willie and the owners to decide what happens next.”

Townend was asked about Al Boum Photo’s run in the WellChild Cheltenham Gold Cup, and said: “He wore his heart on his sleeve again. He missed a couple of fences this year, which wasn’t ideal. He’s gone down fighting.”

Asked to comment on the success this week of Rachael Blackmore, Townend’s friend and rival in the Irish jockeys’ title, he laughed: “She even took the limelight off my winner there - she was getting her leading jockey’s presentation as I came in, so we’ll have to have words with someone about that, I think!”

Mark Walsh, the jockey on runner-up Elimay, said: "She wears her heart on her sleeve and ran a great race, but we were just beaten by a better mare."

Lisa O’Neill, representing trainer Denise Foster, said of third-placed Shattered Love: “She ran a cracker. I think she probably would have appreciated a bit more of an ease in the ground, but she would had to have turned the tables on Elimay today (after finishing second to her at Naas last month), so we’re happy with her run. We’ll think about Aintree or Punchestown for her.”