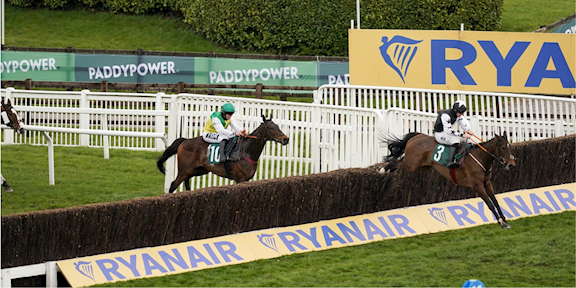 Jockey Jack Kennedy admitted he thought his chances of victory on Mount Ida had “gone out of the window” after just four fences of the Fulke Walwyn Kim Muir Handicap Chase (Sponsored by the JRL Group) before the 3-1 favourite eased to a six and a half length victory.

The closing race of day three of The Festival™ supporting WellChild also provided trainer Denise Foster and jockey Jack Kennedy with their third win of the week and Ireland’s 17th.

Taking the lead two from home, the seven year old mare stayed on resolutely to score comfortably, but Kennedy was not always so confident. Speaking at the post-race press conference he explained: “She wasn’t jumping or travelling early on but she warmed into it lovely and she was doing her best work at the finish.

“We did (think she would stay the trip). I had planned for it to go a bit smoother during the early part of the race but I was left in the position I was left in and I just had to make my way through what I could from there. Luckily I had a willing partner.

“I suppose we were hoping she would run a big race. We thought she might have been there or thereabouts if things had gone smoothly for us but to be honest I thought my chances had gone out of the window after jumping four fences but she started to warm into it then. I suppose at the top of the hill I was fairly happy and ended up getting there too soon in the end but she was great. She could be a Grand National type.

“The experience of that race will stand her massively in good stead as she got a little shock to the system over the first few fences as she had only run in small fields but she is well able to jump once she got the confidence to do so. She stays well as well and she could be a (Grand National horse). After the day I was having it was probably one of the most satisfactory winners I’ve had.”

Venetia Williams, trainer of runner-up Cloudy Glen, said: “That was a great run and I’m delighted to have won the British division of the race. He’s a quirky fella and he’s just crept through on the inside.

“Robbie’s (Dunne) given him a lovely ride and we’ve beaten everything but the favourite. When you come to the Cheltenham Festival, it’s not a case of finding the right race, it’s trying to have your horses as fit and as well as you can have them and then hoping for the best.

“He’s in fine form, he walked into the winner’s enclosure and Robbie gave him a little pat with his hand on the backside and he shot off! I said if he’d done that half way up the run-in might have won!”

Harry Cobden, rider of third home Shantou Flyer said: “These horses are only there really for David (Maxwell, owner and usual rider), so it’s kind of him to keep him in training for me to ride. He’s a solid horse and fingers crossed he’ll be ready for him in April. Not many horses are placed in four Festivals in a row, so I’m happy with that.”

Kerry Lee, trainer of the fifth home Storm Control, said: “He’s run very well and seems to love it here. If he gets in the Grand National I’ll consider it, but I’ve got to discuss it. I’m not sure he gets the trip.”