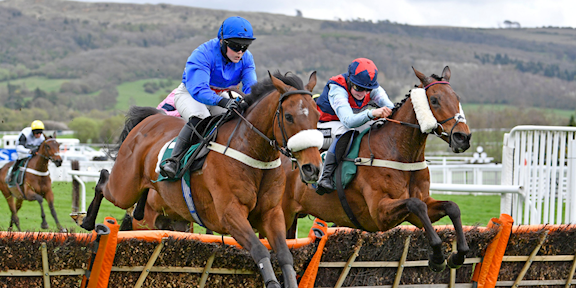 The seven year old has been consistently hitting the frame for his yard all winter, including when a valiant fourth behind the re-opposing Coole Cody in last month’s Craft Irish Whiskey Co. Festival Plate over today’s course and distance.

The son of Lord Du Sud certainly looked suited to that trip today, pulling clear of Simply The Betts after a fine jump at the last fence. It was a performance which delighted his jockey Sam Twiston-Davies, who feels his charge has what it takes to become a fixture in these valuable contests.

He said: “He’s been good this season and he’s been well-placed by Sam to kind of educate him.

“When he was with us at home (Stolen Silver was previously trained by Nigel Twiston-Davies) he’d always be quite keen and forward and one thing he’s kind of learned is to get more relaxed during his races – hence why he’s able to finish a good bit better over a further trip.

“I think he’ll be a very similar type to Coole Cody in that he’ll run in these valuable handicaps and he’ll always give his running as he’s a good and sound jumper and he tries hard.

“Naturally, as you come up and down the handicap, he’ll have his turn and then others will have theirs, Obviously you dream about having horses who can go one up but at the same time if you have a horse that jumps and tries in these big field handicaps like he does you can’t go wrong. He’s a pleasure to ride.”

James Potter, part-owner of Stolen Silver, added: “We're pleased with that. He was fourth here at The Festival and he's come back and finished the season on a high note. He'll go out to grass now and we'll see what Sam (Thomas) and Dai (Walters, co-owner) say. We could look at the October meeting and certainly November.

“It makes up for the bad days and Aintree - Mister Fisher made a mistake and it was game over, Before Midnight didn't run well but Exelerator Express ran alright. This is the one that you want, that's what sport is about.”

Meanwhile, our opening race saw a first winner at Cheltenham for jockey Isabel Williams, who struck on board Bold Plan (6-1) in the Kingston Stud Handicap Hurdle (2m 4f 56y) for her father Evan.

The eight year old has been a revelation since teaming up with Williams, with the pair sealing a hat-trick with a comfortable two and a half-length success over Whatsupwithyou. The 24 year old jockey was full of gratitude to the Rucker family for giving her the opportunity to partner the son of Jeremy, who is thriving at the moment.

She said: “He’s on a roll but he’s been a lovely horse all his career really. He was running in some really competitive handicaps and he got his confidence back when he won at Market Rasen in a little lower grade.

“It’s my first Cheltenham winner, which is nice to do. Mr and Mrs Rucker have been so supportive of all of us in the yard, so I’m very grateful they let me have a chance and I’m happy it came off for them.”

Winning trainer Evan Williams added: “It’s a first winner at Cheltenham for the girl, which is always good. She just gets on with the horse and sometimes that can happen, a jockey gets on with a horse and it’s just been great and to get her a first Cheltenham winner is very special.

“We’re improving and as a jockey you have to improve, but she’s a huge help at home and I’m getting older and more decrepit so it’s nice to have someone helping out!

“That’s all I can think of as he’s always been talented, but he’d definitely lost his way with the boys and it was definitely one last roll of the dice to try Isabel on him and luckily, it’s clicked. Sometimes it works and sometimes it doesn’t and it has in this instance.”