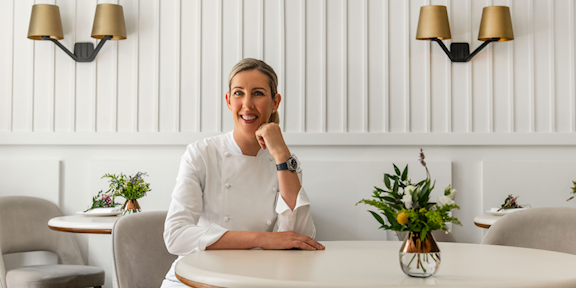 CLARE SMYTH, FIRST BRITISH WOMAN TO BE AWARDED 3 MICHELIN STARS IN THE UK, TO OPEN NEW RESTAURANT AT THE FESTIVAL™

The Jockey Club today announced the launch of an on-course restaurant by internationally acclaimed Clare Smyth MBE -- the first British woman in the UK to have been awarded three Michelin stars.

The ‘Core by Clare Smyth’ restaurant in Kensington, London is regarded as one of the best restaurants on the planet and is one of only eight in the UK to hold three Michelin stars.

Now racegoers at Jump Racing’s most prestigious festival will be able to combine world-class horseracing with world-class cuisine, when ‘Core on Course by Clare Smyth’ launches at Cheltenham in March 2023.

The new venture, which replaces one of the racecourse’s previous restaurants, Theatre@, will be offered alongside Chez Roux, an on-course dining experience from another legendary chef, Michel Roux Jr, who runs the two Michelin star Le Gavroche in London.

Having grown up in Northern Ireland, Smyth was appointed Member of the Order of the British Empire for services to the hospitality sector in 2013 and learned her trade working under Gordon Ramsay for nearly 14 years as Chef Patron of Restaurant Gordon Ramsay where she first earned and retained three Michelin stars before opening her own restaurant.

Core by Clare Smyth was the first restaurant to enter the Good Food Guide with a perfect 10 score and in just three years was awarded 3 Michelin stars. Smyth also owns ‘Oncore by Clare Smyth’ in Sydney. She has received numerous awards including the title of the World's Best Female Chef by the World's 50 Best Restaurants and catered for the private wedding reception of Prince Harry and Meghan Markle.

‘Core on Course by Clare Smyth’ will be located in the Tented Village at the Cheltenham Festival, right at the heart of one of world sport’s most prestigious events.

Smyth said: “I am delighted to be a part of such an iconic world-famous event with an extensive history of top-class racing. I look forward to working with The Jockey Club to create ‘Core on Course by Clare Smyth’, starting at The Festival in 2023.”

Ian Renton, The Jockey Club’s Regional Director of Cheltenham and the West, added: “We’re all thrilled that Core on Course by Clare Smyth will be launching at next year’s Cheltenham Festival.

“We know The Festival already offers racegoers an experience like no other and it brings us great pleasure to be able to compliment the action on the track with an unrivalled level of hospitality in the Tented Village.

“Clare is known throughout the culinary world as one of the leading chefs of her generation and we cannot wait to sample her iconic ‘Core’ brand in the Cotswolds next March.”

For more information on Core on Course by Clare Smyth packages, please head to https://www.thejockeyclub.co.uk/cheltenham/events-tickets/the-festival/dining-and-hospitality/restaurant-packages/core/