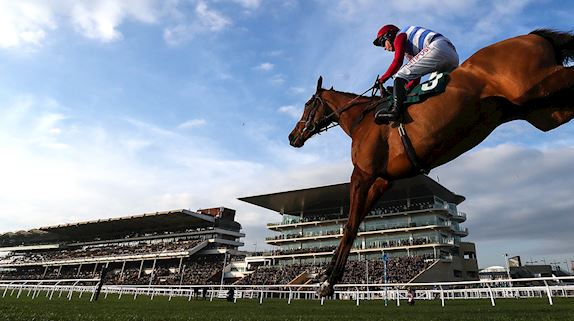 Kiltealy Briggs set to test mettle at The International

Impressive Hexham winner Kiltealy Briggs looks set to tackle a rise in class and trip in the £32,000 G2 Albert Bartlett Novices' Hurdle at Cheltenham on Saturday, 14 December, day two of The International.

The three-mile contest is a key trial for the G1 Albert Bartlett Novices' Hurdle on day four of The Festival™ presented by Magners in March.

Four winners of the Albert Bartlett Novices' Hurdle at The Festival have previously captured the race at The International - Black Jack Ketchum (2005/06), Nenuphar Collonges (2007/08), Unowhatimeanharry (2015/16) and Kilbricken Storm (2017/18).

Trained by Jamie Snowden and owned by the McNeill family, Kiltealy Briggs was beaten a short-head on his debut over hurdles at Wincanton in October.

The five-year-old justified even-money favouritism with a facile 36-length success on his latest start over two and a half miles on heavy ground at Hexham in November.

Lambourn-based Snowden said: "Kiltealy Briggs is in good form and the three-mile G2 at Cheltenham next week is the next target.

"The race at Hexham was all about finding building his confidence and getting his head in front after finishing second on his first couple of starts for us.

"He won that race really well and we were delighted with the performance.

"This looks a good race to test how high he can go and we are looking forward to it."

The two highlights of The International are the £140,000 G2 Unibet International Hurdle, which is due to feature the unbeaten Pentland Hills, and the £130,000 G3 Caspian Caviar Gold Cup, both of which take place on Saturday, 14 December.

Rooster Booster was the most recent horse to win the International Hurdle and the G1 Unibet Champion Hurdle in the same season (2002-2003).

Frodon and Bryony Frost landed the spoils in last season's Caspian Caviar Gold Cup before returning to Cheltenham to win the G2 BetBright Trial Cotswold Chase on Festival Trials Day and the G1 Ryanair Chase at The Festival.