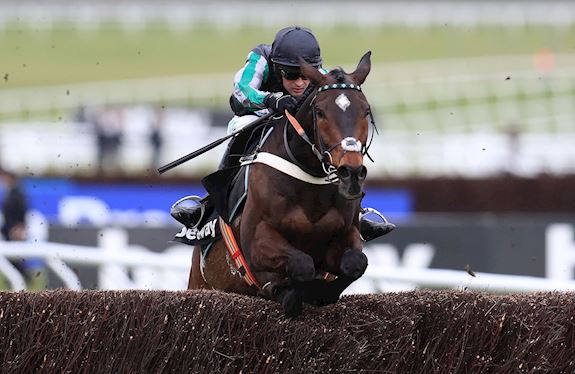 Altior (Nicky Henderson) heads 31 entries for the £400,000 G1 Betway Queen Mother Chase, the championship contest for two-mile chasers and the highlight of day two at The Festival™ presented by Magners, Wednesday, 11 March.

The Patricia Pugh-owned 10-year-old annexed the 2018 running by seven lengths from Min (Willie Mullins) and last year took the honours by a length and three quarters from Politologue (Paul Nicholls). If successful again in 2020, he would become only the second three-time winner of the Betway Queen Mother Champion Chase following on from Badsworth Boy, who triumphed in 1983, 1984 and 1985. Altior is the 3/1 favourite with sponsor Betway.

Altior is a four-time winner at The Festival, having also landed the G1 Sky Bet Supreme Novices' Hurdle in 2016 and the G1 Racing Post Arkle Novices' Chase in 2017. He went on to break the record of the great Big Buck's by winning 19 consecutive Jump races between October, 2015 and April, 2019 - 10 of which came at G1 level. Trainer Nicky Henderson has also made an entry for G2 Haldon Gold Cup victor Janika and is the joint-most successful handler ever in the Betway Queen Mother Champion Chase alongside the late Tom Dreaper with six victories.

The horse that brought Altior's winning run to a close was Cyrname (Paul Nicholls), who came out on top by two and a quarter length in the G2 1965 Chase over two and a half miles at Ascot on 23 November. Cyrname, who was subsequently a well-beaten second when stepped up to three miles for the G1 King George VI Chase at Kempton Park, has yet to run at Cheltenham having shown a preference for right-handed tracks. The 11-times champion Jump trainer Nicholls is bidding for a record-equalling sixth Betway Queen Mother Champion Chase and has six entries in total. In addition to Cyrname and Politologue, Nicholls has also entered Dynamite Dollars, who won four of his five starts in 2018/19 including the G1 Henry VIII Novices' Chase, Capeland, Diego du Charmil and Magic Saint.

A trainer chasing is a first Betway Champion Chase is Gloucestershire-based Tom George. The Slad handler has had three horses placed in recent years with Module taking third in 2014, Sir Valentino also taking third in 2017 and God's Own occupying the same position behind Altior in 2018.

This year George has entered Bun Doran, who recorded his biggest victory last time out in the G2 Desert Orchid Chase at Kempton Park on 27 December, when he defeated 2019 Racing Post Arkle Novices' Chase winner Duc des Genievres (Willie Mullins) by a length and a half with Sceau Royal (Alan King) in third. The nine-year-old also has good course form at Cheltenham, winning a two-mile handicap chase under top-weight at The November Meeting in 2018 and finishing second under 11st 7lb in the 2019 G3 Johnny Henderson Grand Annual Handicap Chase at The Festival.

George said: "Bun Doran is in good form and the Betway Queen Champion Chase is the intended target for him.

"We were delighted with his victory at Kempton. Kempton is a tight track but he jumped really well. He is probably better suited to left-handed tracks, but he travelled nicely and won well.

"We will keep him fresh for Cheltenham and look forward to running there.

"He is improving all the time and we have had horses including God's Own and Sir Valentino placed in the race."

The 7/2 second favourite with Betway is Defi du Seuil (Philip Hobbs), who has twice been successful at The Festival with victories in the 2017 G1 JCB Triumph Hurdle and 2019 G1 MARSH Novices' Chase. The J P McManus-owned seven-year-old has won both his starts this season in the G2 Shloer Chase at Cheltenham and G1 Tingle Creek Chase at Sandown Park.

There are 13 Irish-trained entries, including seven from Ireland's champion Jump trainer Willie Mullins. The pick of Mullins' entries with Betway is Chacun Pour Soi, runner-up to A Plus Tard (Henry de Bromhead) in a G1 contest at Leopardstown over Christmas.

The Betway Champion Chase is one of the few major prizes in Jump racing to have so far eluded Mullins.

Alan Alger, Head Of Corporate Communications and PR at Betway, said: "The big news story of late is that Altior will only have one entry at The Festival and that is for the Betway Queen Mother Champion Chase, where he will attempt to defend his crown and gain a record-equalling third success.

"The two-time winner of our showcase sponsorship race may not have it all his own way this year as there are a whole host of young pretenders who look set to make this year's renewal the best for some years."

Frodon among 44 in Ryanair Chase

The memorable 2019 winner Frodon is among 44 entries for the £350,000 G1 Ryanair Chase over an extended two and a half miles on day three of The Festival, 12 March.

Frodon and jockey Bryony Frost provided one of the moments of last season in Ryanair Chase, with Frost becoming the first female rider to win a G1 race over obstacles at The Festival.

Paul Nicholls has the best record of any trainer in Ryanair Chase, with three successes, and the Ditcheat handler's four-strong team also features Ascot specialist Cyrname, Dynamite Dollars and Politologue.

Balko Des Flos' stablemate A Plus Tard looks the pick of Irish-trained entries following his victory over Chacun Pour Soi (Willie Mullins) in a G1 chase at Leopardstown over Christmas. A Plus Tard was one of the most impressive winners of The Festival in 2019 when bolting up in the Listed Close Brothers Novices' Handicap Chase.

Nigel Twiston-Davies captured the Ryanair Chase in 2009 with future Cheltenham Gold Cup hero Imperial Commander and the trainer could have another chaser in that bracket courtesy of Riders Onthe Storm.

Purchased out of Tom Taaffe's yard for £50,000 at the Goffs Spring Sale in May, Riders Onthe Storm is unbeaten in two starts for Twiston-Davies. The seven-year-old defeated Cepage (Venetia Williams) in a valuable handicap chase at Aintree in November and took another step forward when impressively landing a graduation chase at Ascot on 21 December, both over intermediate distances.

Carl Hinchy, who part-owns the horse alongside Mark Scott, said: "Riders Onthe Storm is very well and came out of Ascot bouncing.

"He has done brilliantly since coming over from Ireland and we are looking forward to the rest of the season.

"He has been entered in the Betway Queen Mother Champion Chase as another option, but the Ryanair Chase would be the plan.

"It will be up to Nigel where he goes next. He may take in the Ascot Chase [15 February] on the way to Cheltenham because that race fits in nicely.

"However, we are just as happy if he goes straight to Chetenham as the owners would be keen for him to run at Aintree in the Melling Chase after Cheltenham."

Grade 1, £400,000 Total Prize Fund. 3.30pm Cheltenham, Old Course, Wednesday, March 11, 2020. Two miles (1m 7f 199y). For 5yo+ who are allotted a rating of 130 or more by the BHA Head of Handicapping following a review of the horses entered and after taking account of races run up to and including the day prior to confirmation - horses who are not qualified for a rating in Great Britain, Ireland or France may also be entered & such horses may be eligible providing the Handicapper is satisfied that the horse's racecourse performances up to and including the day prior to confirmation would merit a minimum rating of 130 (the decision of the BHA Head of Handicapping shall be final). Weights: 11st 10lb. Allowances: mares 7lb. Entries closed January 7 (31 entries), scratchings' deadline February 11, £20,000 supplementary entry & six-day confirmation stage March 5. Final 48-hour declaration stage, 10am, March 9. Maximum number of runners - 20.

Grade 1, £350,000 Total Prize Fund. 2.50pm, Cheltenham, Thursday, March 12, 2020, two miles & five furlongs (2m 4f 166y). For 5yo+ who are allotted a rating of 130 or more by the BHA Head of Handicapping following a review of the horses entered and after taking account of races run up to and including the day prior to confirmation - horses who are not qualified for a rating in Great Britain, Ireland or France may also be entered & such horses may be eligible providing the Handicapper is satisfied that the horse's racecourse performances up to and including the day prior to confirmation would merit a minimum rating of 130 (the decision of the BHA Head of Handicapping shall be final). Weights: 5-y-o 11st 9lb, 6-y-o and upwards 11st 10lb. Allowances: mares 7lb. Entries closed January 7 (44 entries), scratchings deadline February 11, £17,500 supplementary entry stage and six-day confirmation stage March 6. Final 48-hour declaration stage, 10.00am, March 12. Maximum number of runners - 24.