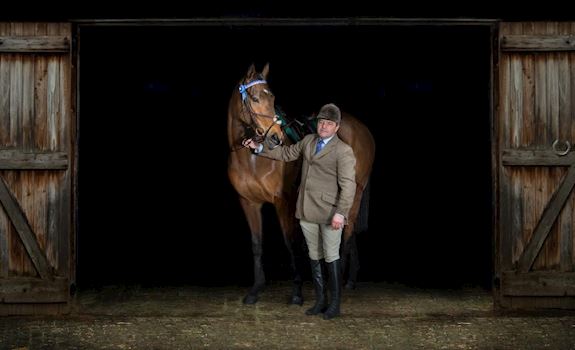 Cue Card and Coneygree, two horses whose past exploits are etched in the panels that celebrate landmark Cheltenham winners, head a list of a dozen former racehorses parading on day one of The Festival™ presented by Magners at Cheltenham (Tuesday, 10 March).

The 12 horse line-up features nine individual G1 winners, seven of which are winners at The Festival, and showcases the range of activities open to racehorses when they finish their racing careers. The annual parade is organised by racing's official charity for the welfare of retired racehorses, Retraining of Racehorses (RoR), and takes place at 12.30pm on day one of The Festival.

On the racecourse, the nine time G1 winner Cue Card and the 2015 Cheltenham Gold Cup winner, Coneygree, once finished first and second, when taking each other on in the 2016 Betfair Chase at Haydock Park. Both are now enjoying a second career outside of racing and the pair are likely to compete against each other again, but this time in the show ring.

Although Coneygree was only retired from racing in February 2019, he has adapted quickly to his new career. Ridden by trainer Mark Bradstock's wife, Sara, Coneygree has already won RoR showing classes and the pair's ambition for 2020 is to qualify for the prestigious RoR Tattersalls Show Series Final at Hickstead in June.

Meanwhile, Cue Card is in the care of renowned showing producer Katie Jerram-Hunnable, who enjoyed notable successes with The Queen's Barbers Shop. Cue Card has already won in-hand showing classes and an early season target for 2020 is the ridden RoR class at the Royal Windsor Horse Show in May.

Besides Coneygree and Cue Card, other Festival winners in the parade, which is again sponsored by the Sir Peter O'Sullevan Charitable Trust, include Captain Chris, Dodging Bullets, Master Minded, The New One and Zarkandar.

Di Arbuthnot, Chief Executive of RoR, added: "In terms of what they have achieved in their racing careers and also in their second careers, I think this year's line-up is probably the strongest we have ever had.

"Not only does the parade boast nine G1 winners, including a Gold Cup winner, two Queen Mother Champion Chase winners and an Arkle winner, but their feats in their second careers are notable too. All twelve have found their metier in a discipline and role away from racing, whether it be showing, eventing, hunting, dressage or team chasing.

"Our thanks to Cheltenham for giving us the opportunity to parade these horses and to the Sir Peter Charitable O'Sullevan Trust for their generous and on-going support of the RoR parades."