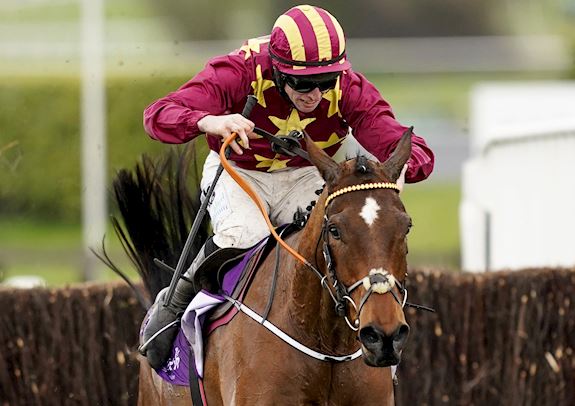 Yet another Festival™ supporting WellChild at Cheltenham has drawn to a close and what a week it was. There was thrilling drama, sensational performances from equine and human superstars and records broken at every turn.

On Day Four the WellChild Cheltenham Gold Cup took centre stage but there were also trophies handed out for leading jockey, trainer and owner for the week.

Jack Kennedy wept tears of joy after winning the WellChild Cheltenham Gold Cup with Minella Indo and admitted: “This is the best day of my life.”

The 21 year old rider, who has broken his leg four times already in his career, landed the most prestigious prize in Jump Racing as Minella Indo fought off stablemate A Plus Tard and Rachael Blackmore to win by one and a quarter lengths.

And he said: “It’s definitely the best day of my life. You dream about winning those sorts of races when you’re a child. I know I’m still young, but I suppose I have been in the position where I could have been winning them for a couple of years, so to get it done is brilliant.”

Stablemate A Plus Tard finished second with Rachael Blackmore on board and Al Boum Photo’s bid for a third consecutive Cheltenham Gold Cup was thwarted, with Willie Mullins’ superstar back in third.

For Minello Indo’s trainer Henry de Bromhead it was another piece of history as he became the first trainer to win the Unibet Champion Hurdle, the Betway Queen Mother Champion Chase and the WellChild Cheltenham Gold Cup in the same week.

Quilixios handed Rachael Blackmore her sixth victory of the week in the JCB Triumph Hurdle, which eventually proved enough to secure the leading jockey trophy for the 31 year old rider.

Blackmore said: “It’s incredible. Henry has only had this horse a very short space of time, so all the work was done for him by everyone at Cullentra Stables, so it’s all thanks to their work really. Henry just had to get him here on the boat, so big thanks to all of them. He’s a smashing horse and thanks also to Cheveley Park for putting me up, it’s brilliant.

“My parents are getting a great kick out of it, so it’s brilliant. They would have loved to have been here today, like a lot of people, but I’m just happy I’m here and that these horses are here.”

De Bromhead added: “It’s  been an incredible week - the stuff you dream about. Quilixios is a gorgeous horse: obviously we have just got him. We’re delighted for the Thompsons of Cheveley Park - they are great supporters of ours.”

Cromwell said of his 14-1 winner: “I wasn’t sure how he was going to act on that better ground; he’s been running on heavy ground in Ireland all year, and he’s quite a slow horse, but Mark [Walsh] said he travelled with loads of enthusiasm today.

“He lined him up good and handy, because we thought he might struggle to travel early, but he showed an extra gear there that he hasn’t shown before, and we know he stays really well.

“I’m not surprised he’s won, but I am surprised by the manner he’s done it in. The ground at Christmas at Limerick [when Vanillier finished second to Farouk D’Alene] was absolutely knee-deep and he got a little bit lost in the middle part of the race and stayed on very well at the finish.”

Jockey Kevin Sexton landed his first ever victory at The Festival™ supporting WellChild with 33-1 chance Belfast Banter – then thanked his girlfriend for persuading him to return to racing two years ago.

Speaking after victory in the McCoy Contractors Handicap County Handicap Hurdle, Sexton revealed he quit race riding and had planned to live in the USA until being talked out of it.

He said: “I am in shock here, to be honest. It still hasn’t sunk in. I couldn’t believe it when I pulled up. I finished second here a couple of years ago, beaten by one of my best friends in a photo-finish, and I never thought I’d get a chance like that again.

“I actually couldn’t believe it. I got quite emotional pulling up. I actually stopped riding two years ago because it just wasn’t happening for me, I had a couple of injuries and I got kind of into a low place, and if it wasn’t for my family, my girlfriend, friends and Peter, I wouldn’t be back riding. In my head I had given up. To be here riding a winner is unbelievable.

“I was persuaded to give it one last go, and I haven’t looked back since. Although I had given up, no one had given up on me, luckily enough. I actually had it in my head to go to America, just to get away from everything.

“Peter got me back and I was associated with Peregrine Run, on whom I won eight or nine races that year, and he put me back in love with racing. He was my first ride back, in a Grade Three, and he won and it got me rolling again without me even noticing.

Porlock Bay scored by a short head in the St James’s Place Festival Hunters’ Chase to hand Great Britain its first and only winner on day four and only their fifth overall at The Festival™ supporting WellChild in 2021.

It was a first Festival success for jockey Lorcan Williams and for trainer Will Biddick, although the latter did partner Something Wells to victory in 2009 in what is now the Paddy Power Plate. Biddick would ordinarily have been in the saddle today but is unable to ride at present due to COVID-19 regulations.

Biddick said afterwards: “I just can’t tell you what’s gone through my body in the last five minutes. I was in bits watching that. I was running up the side of the course with Lorcan, just screaming and I was in tears, I was a right softy.

“I’m so glad for Lorcan and John Studd the owner. It’s not just me, it’s a big team in the yard and a lot of boxes to be ticked to get here today. We were grateful just to be here today, so to top it off with that is phenomenal.

“I had tears running down my face. All that effort going in and you want your head in front at the end, but either way he ran a super race. I can imagine Harriet, my wife, and Archie (my son) and the whole gang at home in the yard… it’s just fantastic."