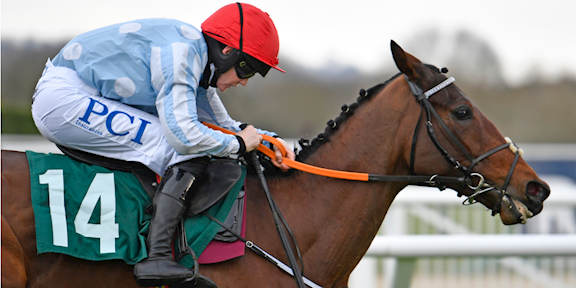 As the action moved to the New Course on Day Three of The Festival™ supporting WellChild at Cheltenham there was yet more drama and some scintillating front-running performances.

Brilliant Rachael Blackmore landed her fourth Grade One race of the week, Willie Mullins proved his team are just as formidable as we thought they would be and there was a big upset in the first race.

Willie Mullins admitted he was “gobsmacked” by the front-running performance of Allaho as he cruised to a 12-length victory in the Ryanair Chase, giving jockey Rachael Blackmore her fourth Grade One success of the week.

The 31 year old won the Unibet Champion Hurdle with Honeysuckle on Tuesday, before adding the Ballymore Novices’ Hurdle with Bob Olinger and the Weatherbys Champion Bumper with Sir Gerhard yesterday.

After winning the Ryanair Chase, Blackmore described her week as “out of this world” and said: “It’s incredible! I’m very grateful to be getting these opportunities. He put in a fair performance; he jumped and galloped everywhere. I never felt like I was out of my comfort zone anywhere. It was fantastic.

“When you are riding for two powerful stables it makes a jockey’s job a lot easier, and I can’t tell you how grateful I am to be in this position and be getting these types of chances. You have to have the engine underneath you - it’s very hard to do it up that hill without the engine.”

Blackmore later landed her fifth trophy of the week by winning the Parnell Properties Mares’ Novices’ Hurdle with Telmesomethinggirl.

She added: “How would I describe this week? Out of this world."

PORTER LEAVES HIS RIVALS ON THE FLOOR

Jockey Danny Mullins proved to be a last minute super-sub as Flooring Porter won the Grade One Paddy Power Stayers’ Hurdle by an impressive three and a quarter lengths.

It was a second winner at The Festival™ supporting WellChild for trainer Gavin Cromwell following Espoir d’Allen in the 2019 Unibet Champion Hurdle and a first for jockey Mullins, who only came in for the ride following Jonathan Moore’s decision to stand himself down earlier in the day.

Cromwell said afterwards: “That was a huge performance. Danny gave him a smashing ride. It’s very unfortunate for Johnny Moore that he couldn’t ride him. He had a bad fall on Sunday and he thought he was going to be ok, but he rode this horse out this morning and he made the decision that he wouldn’t do the horses justice today.

“Thankfully and rightfully so, he stood himself down, and he suggested Danny would be well suited to the horse. Johnny has ridden him all along and brought him all the way to here, and it is very unfortunate for him. It’s all down to Johnny’s instructions - he’s a quirky ride and he gave Danny plenty of instructions. Hats off to Johnny; so unselfish. I’m very grateful to him.”

Mullins added: “It’s fantastic to get my first winner on the board at Cheltenham and being a Grade One as well. I’m really enjoying what I’ve got out of it today but I’d say two per cent of the success is down to me and 98 per cent is Jonny, Gavin and all the team.”

SHOCK FOR PUNTERS AS ‘BANKER’ ENVOI MISSES OUT

Much of the build-up to the Grade One race had been devoted to the 4-9 favourite, Envoi Allen, but after he and jockey Jack Kennedy parted company at the fourth fence it was all about 9-1 chance Chantry House.

With de Boinville on board they quickened in the closing stages, jumping the last ahead of stablemate Fusil Raffles before securing a three length victory. It was a 67th Festival success for owner JP McManus and his first of 2021.

De Boinville said afterwards: “I didn’t even know Envoi Allen had come down. I was wondering when he was going to come pick me up in the straight, so it’s news to me when and where he went. Never discount Nicky Henderson round here, or ever. It’s been a tough couple of months, but the horses seem to be returning to form. Trust in the Guv’nor!”

COOPER BACK WITH A BANG AFTER FOUR YEAR WAIT

Cooper won a Cheltenham Gold Cup in 2016 on Don Cossack when number one rider for Gigginstown but has endured four years without a win at The Festival.

And he said afterwards: “It’s great. I can tell you it’s been a lonely couple of years walking out of this place without any winners when you get used to riding them.

“I had to start at the bottom and work my way up - there was nobody going to hold my hand and do it for me. I’m a big boy now and it was up to me to change things around and I’m just so grateful to be getting these rides, and to be riding for Willie here this week as well, and getting the opportunities. I just have to start enjoying it now again.”

Mrs Milner won at 12-1, with the favourite The Bosses Oscar in second.

The eight-year-old had previously landed the Grade Three Unibet Greatwood Handicap Hurdle at The November Meeting and the gelding also hands connections a £100,000 bonus, having taken the bet365 Morebattle Hurdle at Kelso on his last run before The Festival™ supporting WellChild.

It was a first Festival victory for both trainer Emmet Mullins and jockey Jordan Gainford and, as the 15th Irish-trained success of the week, secured the Pertemps Prestbury Cup for Ireland.

Mullins said at the post-race press conference: “He was very good today. He’s tough and durable; there doesn’t seem to be anything fazing him. It’s probably no great reflection on me, but at the time I thought he had to go for a beginners’ chase at Punchestown for horses rated 116 or less over hurdles.

“Jordan is catching everyone in Ireland’s eye at the moment. He’s very talented and the owner, Paul, was fairly insistent on claiming 7lb, and at that Jordan was the only option. He’s very good and he showed that here today.”

Gainford added: “It’s unbelievable really. It’s something you can’t describe. It’s a feeling I’ve never had before. It is hard to describe that feeling when you cross the line, it is just something else to be honest."