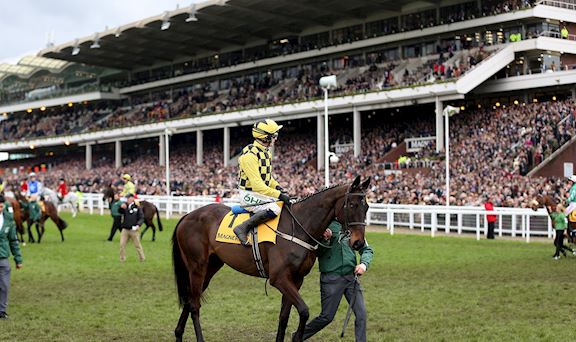 The G1 highlight carries a total prize fund of at least £625,000 and takes place over an extended three and a quarter miles of the New Course on the fourth and final day of The Festival™ presented by Magners.

The great Best Mate (2002, 2003, 2004) is the most recent horse to successfully defend the Magners Cheltenham Gold Cup and Al Boum Photo is likely to head straight to Cheltenham following a convincing victory in a G3 chase at Tramore on 1 January, just as he did in 2019.

No current trainer has enjoyed more success in the Magners Cheltenham Gold Cup than Paul Nicholls, thanks to the triumphs of See More Business (1999), Kauto Star and Denman (2008). The Ditcheat handler has two entries in 2020 - last year's fifth Clan Des Obeaux, who captured the G1 King George VI Chase for a second time at Kempton Park on Boxing Day, and Frodon, who scored a memorable success in the 2019 G1 Ryanair Chase under Bryony Frost.

Lostintranslation (Colin Tizzard) was pulled up behind Clan Des Obeaux at Kempton Park and has since undergone a wind operation, but had impressed previously when narrowly outgunning Bristol de Mai (Nigel Twiston-Davies) in the G1 Betfair Chase at Haydock Park in November.

Bristol de Mai, who finished third in last year's Magners Cheltenham Gold Cup, has been kept fresh since the Betfair Chase and is likely to run next in the £100,000 G2 Cotswold Chase on Festival Trials Day, 25 January, the final meeting at Cheltenham before The Festival.

Anthony Bromley, racing manager for owners Simon Munir & Isaac Souede, said: "Bristol de Mai has been pleasing Nigel and is on schedule for the Cotswold Chase at the end of the month, in preparation hopefully for another tilt at the Magners Cheltenham Gold Cup.

"The idea after the Betfair Chase was to always go Cotswold Chase and then Gold Cup, and Nigel has been particularly happy with him of late. There wasn't really a race for him over Christmas, as we did not want to take him to Kempton because he hasn't really fired there for the last couple of years.

"He finished third in the Gold Cup last year and, although he is fairly big odds as things stand, we are looking forward to having another crack at it. Maybe his odds are a touch too big, but we are not kidding ourselves because it is going to be a tough ask. I suppose if he goes and wins the Cotswold Chase, he will shorten, won't he?

"We have put him in the Ryanair Chase as well, just to give us that option, but it is more than likely that he goes for the Gold Cup."

In the Cotswold Chase, Bristol de Mai is likely to clash with Santini (Nicky Henderson), runner-up last season at The Festival in what looked a strong renewal of the G1 RSA Insurance Novices' Chase, and Ladbrokes Trophy hero De Rasher Counter (Emma Lavelle).

Other Magners Cheltenham Gold Cup entries to note are the in-form Henry de Bromhead-trained pair of Monalee and Chris's Dream. Monalee finished second behind Delta Work in the G1 Savills Chase at Leopardstown over Christmas, while Chris's Dream captured the Troytown Handicap Chase impressively at Navan when last seen out in November.

The scratchings deadline for the Magners Cheltenham Gold Cup is at noon on Tuesday, 11 February, with the details revealed the following day. The six-day confirmation and £31,250 supplementary entry stage takes place on Saturday, March 7

Grade 1, £625,000 Total Prize Fund. 3.30pm, Cheltenham, Friday, March 13, 2020. Three miles, two and a half furlongs (3m 2f 70y). For 5yo+ who are allotted a rating of 130 or more by the BHA Head of Handicapping following a review of the horses entered and after taking account of races run up to and including the day prior to confirmation. Horses who are not qualified for a rating in GB, IRE or FR may also be entered & such horses may be eligible providing the Handicapper is satisfied that the horse's racecourse performances up to and including the day prior to confirmation would merit a minimum rating of 130 (the decision of the BHA Head of Handicapping shall be final). Weights: 5yo 11st 8lb, 6yo+ 11st 10lb. Allowances: mares 7lb. Entries closed Tuesday, January 7 (31 entries), scratchings' deadline Tuesday, February 11, £31,250 supplementary entry stage & six-day confirmation stage Saturday, March 7. Final 48-hour declaration stage, 10.00am, Wednesday, March 11 Maximum number of runners - 24.