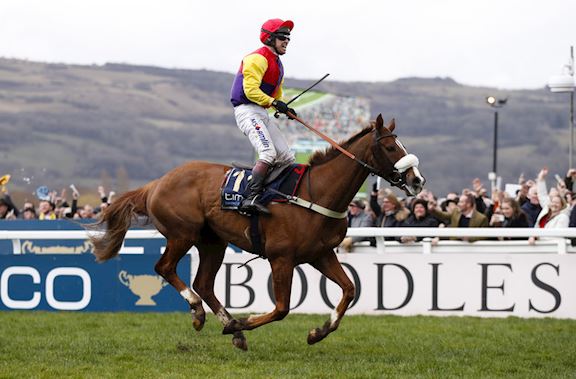 Seasoned racing tipster Jon Vine takes a look at all seven races on Gold Cup day at The Festival™ presented by Magners provides readers with his betting suggestions.

Four days of captivating action come to a crescendo on Friday afternoon, with the prestigious The Magners Cheltenham Gold Cup Steeple Chase headlining proceedings on the fourth and Day Four of The The Festival™ presented by Magners. This historic three-and-a-quarter-mile chase has been won by some of the most famous names in horse racing, with Arkle, Desert Orchid and Kauto Star shining brightly on the Gold Cup roll of honour.

Along with the The Magners Cheltenham Gold Cup Steeple Chase, there are two further Grade Ones, three excellent handicaps and a Foxhunter Chase for viewers to take in. Here are our Cheltenham tips for all seven races this Friday.

I’m trying to find reasons why I should oppose SIR EREC. At evens, he doesn’t really offer much value and the Triumph has thrown up surprise results in the past. Despite those valid points, I’m still finding it almost impossible to go against the market leader.

Sir Erec looked head-and-shoulders above his rivals at Leopardstown, dictating the tempo before producing some electrifying jumps on the final circuit. Mark Walsh could even afford to ease his mount down in the final 100 yards before securing his first Grade One triumph by six lengths. Cheltenham will pose a different challenge to this scopey sort, but Sir Erec won well on undulating tracks during his time on the flat and I have no doubts that he would stay further than two miles, given the opportunity.

If we were guaranteed a large field, I wouldn’t hesitate in tipping Quel Destin at an each-way price, as I’ve been really impressed with everything I’ve seen from this hardy youngster. Yet, the O’Brien team’s decision to move Fakir D’Oudairies to Tuesday’s opener suggests supreme confidence in Sir Erec’s ability. With the Triumph likely to cut up to around seven or eight runners, there may only be two paid places available - making the favourite look even more solid at the top of the market.

I tipped Mohaayed at 33/1 to win this race last year for Dan Skelton and, although he has been good again this term, last year’s winner looks a little too high in the weights this time around. I firmly believe there is a big handicap victory in Western Ryder and he poses a significant threat, but I fancy a novice could get the win this year, with CROOKS PEAK making a strong case.

Philip Hobbs’ youngster ran twice here at Cheltenham during his bumper year, winning a good quality flat race before finishing one from the rear in the Champion Bumper on his Festival debut. The 4/6 favourite was then beaten on his jumping debut on heavy ground at Newton Abbot back in the autumn, but that hasn’t had any affect on Crooks Peak and Hobbs has watched his youngster claim four successive victories since.

The six-year-old held off capable challengers in Danny Kirwan and Some Day Soon in small-field races, before comfortably seeing off ten rivals on his handicap debut on good-to-soft ground at Newbury. Crooks Peak has improved with every run over hurdles and the handicap experience he gained last time out looks extremely valuable. Philip Hobbs has won the County Hurdle twice down the years and he could be celebrating a third triumph in Friday afternoon.

I was extremely impressed with Lisnagar Oscar’s performance at Haydock earlier in the year and I fancy Rebecca Curtis’ hurdler will be there or thereabouts come the end of the race. The Albert Bartlett is, however, notorious for providing shock results and long odds winners, so there’s plenty of value in looking further down the betting the DINONS is the one who stands out for me.

Elliott has sent his novice out ten times already this season, with many of those runs coming on good summer ground. Following a fall on his hurdling debut, Dinons secured five victories on the bounce – a sequence which included lengthy victories at Sedgefield, Perth and Cheltenham’s Open Meeting, where the favourite clocked an RPR of 148 during a 14-length triumph over De Name Evades Me.

Davy Russell held Dinons up alongside eventual winner, Easy Game in the Monksfield Hurdle at Navan in November. Russell was tracking his rival’s every move and was travelling smoothly approaching the last, only for an ill-fated stablemate to suffer a fatal fall ahead of him and Dinons almost came to a complete stand-still.

Elliott has freshened his charge up since then and he’s the only runner in the field to have run to an RPR in the 140s on four separate occasions. Dinons seemed to relish the challenge posed by Cheltenham during that victory back in October and ground conditions will be ideal. 25/1 looks a big price!

Road To Respect has been my each-way fancy all season, but after Noel Meade confirmed his chaser is likely to head to the Ryanair, I’ve had to rethink my selection.

While I think he’s an extremely talented horse, I don’t think Presenting Percy will be suitably prepared for a challenge like the Gold Cup. With every drop of rain that falls, Native River’s chances increase, but I’ve been so impressed with the progress CLAN DES OBEAUX has made this season, I’m going to plump for Paul Nicholls rising star to get the win.

I’ve always been a big fan of Clan Des Obeaux, including Paul Nicholls chaser in my list of horses to track at the start of the season. Heading into the King George, Clan Des Obeaux was on my shortlist, but I feared the seven-year-old may still be a little immature and would definitely improve for his third run in Grade One company.

Clan Des Obeaux proceeded to confound his critics, surging clear after the last to claim Kempton’s most prestigious prize. Harry Cobden’s mount then warmed up for the Gold Cup with a simple triumph in the Denman Chase, cruising to an imperious victory over a small, weak field.

Nicholls’ chaser may not have won here at Cheltenham, but he has run very well in defeat to Whisper and almost carried top-weight to victory in last seasons Caspian Caviar Gold Cup. Clan Des Obeaux victory in the Denman Chase was so impressive, showing composure and maturity in dismissing a two-time Grade One winner in Terrefort. He’s one of the few runners who hasn’t had a disrupted prep for the race and there are few trainers out there better at preparing a horse for the Gold Cup than Paul Nicholls. Clan Des Obeaux is my Gold Cup winner.

Of those at the top of the market, Road To Rome could be the one to side with. However, I’m never comfortably siding with a horse sitting on single-figure odds in a race as open and unpredictable as the Foxhunters, so I’ll be looking further down the betting to find a couple of big value punts.

Paul Nicholls has been on fire this season and has saddled the winner of the Foxhunters on four occasions. While I doubt Pacha Du Polder will be able to complete his hat-trick on what will likely be his swansong, WONDERFUL CHARM could ensure the Foxhunter Trophy returns to Ditcheat for the third year on the bounce.

With Katie Walsh in the saddle, Wonderful Charm came up a nose short of Pacha Du Polder at Cheltenham in 2017, handing Nicholls a famous 1-2 in the Foxhunters. The ground was probably a little on the soft side for Wonderful Charm last year, where he was pulled up well before the end. Nicholls’ eleven-year-old then enjoyed a solid summer campaign, landing a decent prize at Fontwell before placing third in the Champion Hunters Chase at Stratford in May.

Last season, Wonderful Charm warmed up for the Festival with a narrow victory over a modest field. This time around, Nicholls watched his chaser destroy some quality opponents at Doncaster, beating Boa Island and 137-rated Forgotten Gold by 55 lengths. Wonderful Charm is clearly in excellent form and the ground at Cheltenham this year is sure to be more favourable. At 16/1, he offers plenty of value and could go one better than his runner-up finish two years ago.

Horse’s who have won, or run well in, the Grand Annual often perform well when they return to the race and the handicapper has given last year’s champion, Le Prezien an excellent chance of repeating that feat, dropping his rating to just one pound higher than the mark of 150 he carried to victory 12 months ago.

Magic Saint goes from the same yard and looks a classy beast in the making. Bun Doran is another I’ve liked for the race for much of the season, along with Le Prezien, but the one who catches my eye at the bottom of the weights is MIND’S EYE for Henry De Bromhead and he looks ripe for an each-way wager.

Following a poor showing behind Samcro in the Ballymore last term, Mind’s Eye performed much better in the two mile Grade One for novices at Aintree, crossing the line fourth behind impressive winner, Lalor. Mind’s Eye got off the mark over fences at the second time of asking back in the spring, before being well-beaten by Le Richebourg in two prestigious Grade Ones.

De Bromhead then gave Mind’s Eye his handicap debut at the Dublin Racing Festival. Rachael Blackmore left her charge from the rear a little too late on that occasion, but Mind’s Eye really caught the eye in staying on for fourth, passing the post less than five lengths behind the victor. He could go very well on his return to Cheltenham.

The history of the Martin Pipe tells us that classy horse towards the top of the weights, running out of top stables, are the ones to side with in this conditional jockey’s handicap. Salsaretta ran in the Mares’ Novices’ Hurdle on her first start for Willie Mullins last season and handed Felix Desjy a sound thrashing earlier in the season. While she holds each-way appeal, I’ve been sweet on DALLAS DES PICTONS for some time and fancy he will get the job done.

After being well-beaten on his jumping debut, Gordon Elliott’s six-year-old looked much more composed at Leopardstown over Christmas, responding well to pressure to finish a staying-on second behind Ballymore hope, City Island in a decent two-mile maiden. Dallas Des Pictons continued his progression with a maiden victory at Fairyhouse in January, before holding on to win another handicap over three miles at the Dublin Racing Festival.

Gordon Elliott has prioritised this race – named in honour of his former mentor – in recently, saddling back-to-back winners over the past two seasons with Champagne Classic and Blow By Blow. Dallas Des Pictons is a horse moving in the right direction, he’s still well-treated at the weights and dropping back in trip could aid his, and Gordon Elliott’s, hat-trick bid.