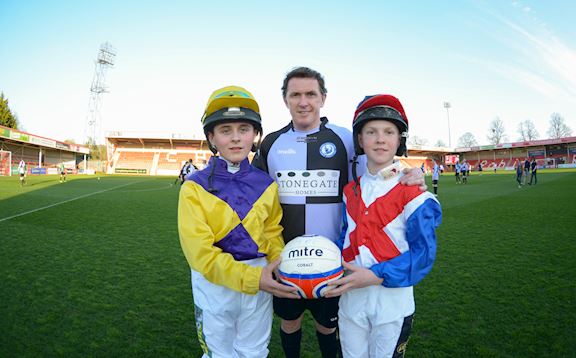 A line up of sporting stars make up AP McCoy’s XI team for the Charity Football Match taking place on Wednesday 17th April at Cheltenham Football Ground - the Jonny-Rocks Stadium.

Heading up the team is AP McCoy as captain and former England football player Dennis Wise will be managing the team. The team consists of:

Challenging AP McCoy’s will be the Unibet XI team of stars managed by Nicky Henderson, this includes:

Join us for a Penalty Shoot Out during Half Time consisting of:

Grab your tickets from £10 to be watch your favourite jockeys, trainers and football star take part in a Charity Football match in aid of the Injured Jockeys Fund.

We will be handing out Easter Eggs to the first 200 children through the gates at the Jonny Rocks Stadium on the night.

Grab your tickets from £10 here today!

*The final line up of teams are subject to change up until and on the day.