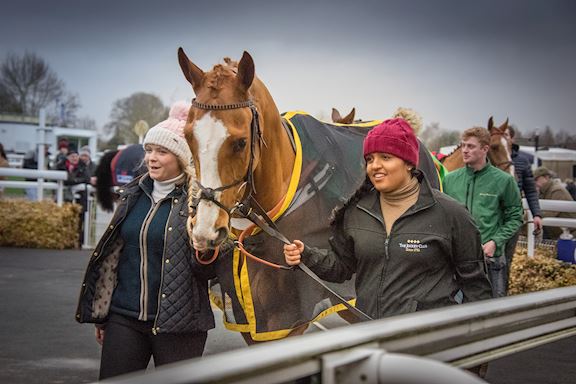 And we are off! As we and the team at Seven Barrows are all well aware, it has been a waiting game with our Jockey Club South West Syndicate horse Diamond River during the first season of this syndicate. However, on Saturday 11th January-Classic Chase Day at Warwick- the wait was finally over.

The 'flashiest' of our three South West Syndicate horses certainly looked the part in the paddock, proving himself worthy of a place in what has historically been considered as a good sign-posting National Hunt flat race.

The race wasn't without incident, particularly on the last bend before the home straight when our lad was bumped sideways and did well to regain his momentum, but he raced on gamely to finish 5 3/4 lengths third to the eventual Olly Murphy-trained winner Here Comes McCoy.

Nicky Henderson commented after the race:

'We were all very pleased with Diamond River’s debut at Warwick on Saturday, and that he appears to have returned unscathed, and it will certainly have given him something to think about. Like everywhere it wasn’t particularly nice ground, although I don’t think it was as soft as we expected it to be. Anyway, I thought he travelled very well through the race and despite receiving a hefty bump turning into the straight ran on really well without getting a desperately hard race. He appears to have taken it all in his stride so far and we will give him a few weeks to digest all that happened which will have been quite a shock to the system. He will have learned a lot and will undoubtedly appreciate better ground, which could be anytime as the forecast is dire!'

He has been entered at Taunton on Sunday 2nd February but Nicky was concerned the ground was too soft so decided not to run. He has since been entered in the 4.30 Maiden Open National Hunt Flat Race at Kempton on Friday 7th February and all being well, he will go there.