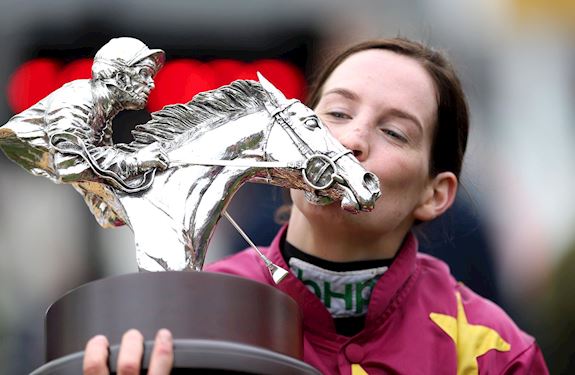 Ripping up the Rulebook: Rachael Blackmore

Rachael Blackmore gets a grilling from her riding rival, friend and housemate Patrick Mullins in The Official Cheltenham Preview Magazine.

Rachael Blackmore has ripped up conventional wisdom: at 9st she was too light to be a jump jockey.

At the age of 26 she was too old for turning professional.

Her record of 11 point-to-point and seven track winners in eight years said she wasn’t good enough either.

She completed school and has a college degree, which isn’t how it’s done.

Too light, too old, too bad, too educated and too feminine. People thought she would be a kite flying in a hurricane. They were wrong. She is the enigma that has exploded doubt.

In 2019, the champion conditional of 2016-17 rode her first winner at The Festival™ presented by Magners.

This was then followed her first Festival Grade 1, her first Irish Grade 1, a maiden Aintree win and a Punchestown Grade 1.

She finished second in the jockeys’ championship ahead of Davy Russell, Ruby Walsh and Barry Geraghty. She won a Kerry National, a Hatton’s Grace Hurdle, as well as two other Grade 1s at Leopardstown over Christmas.

So Rachael, tell me about it.“I haven’t a lot to say now.”

Find out what she had to say on Page 11 of The Official Preview Magazine released online later this week.