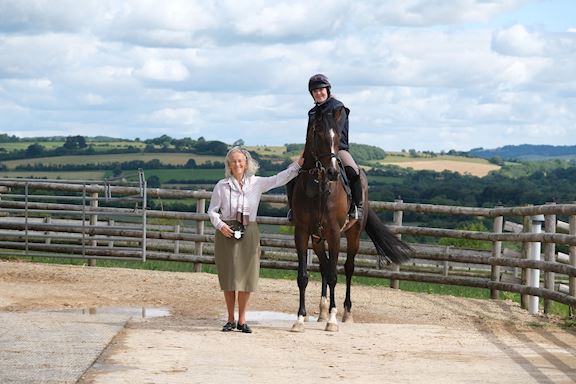 Welcome to part eight of our Syndicate Tales, including news and updates on our Syndicate horses, behind-the-scenes information, and any Membership news.

We recently spoke to Fiona, one of our Syndicate members who gave us her encounter of spectators returning to Cheltenham at The International Meeting.

"I’m lucky enough to have raced regularly at Cheltenham since my teens, a long time ago now. I remember sun and snow, a day when total strangers huddled together on the stands as the wind rose and the temperature fell, races run in fog and in dazzling sun.

Racing for so long, individual days don’t often stand out in the memory, but – I remember The Dikler winning Gold Cup, after Ron Barry had persuaded him that today he would start, thank you, and the local crowd barely surfaced for a day afterwards. I remember a certain grey, said only to like right-handed park courses, who came up the hill to a roar such as I have never heard before: “Dessie! Dessie! DESSIE!” I will now remember Friday 11th December, 2020 in parallel with those. Not particularly for the racing itself, though there were a couple of finishes such as handicappers dream of, but for the rather dream-like quality of it.

The “paperwork” beforehand was clear, and I had duly “Agreed. Agreed. Agreed”, and hoped I had remembered to bring everything necessary. Set off. If you have ever tried to drive from north to south through Winchcombe on a race day, you will know that it would be nice not to (Those of us who live in the high Cotswolds tend to come round Belas Knap, but that’s another story). That day, I sailed through. Coming down Cleeve Hill, I could see a few cars already parked, but the lane to Southam was practically private. Parking on hard standing was a pleasure in itself. Next to me, two chaps had taken proper note of the “No drinks served at the bar” warning and had the boot bar open. I wished them good luck, and set off to the entrance, smug at having remembered to pick up some photo ID. Arrive at the entrance – aargh! I had forgotten a mask. Back at the car, I picked up a spare. Back at the entrance, I came across the first of the succession of very pleasant, cheerful, helpful, course staff. They were, without exception, all like that, all day. Ten out of ten.

Entirely properly, but a sad commentary on other things, the bag search took place as usual. Then everyone was given a proper racecard. Now that was a bonus. Cards on mobiles are fiddly things; cards on paper are easy to flick through and can have results and comments scribbled on them.

Once inside, the lack of people was initially distinctly disconcerting, but it quickly stopped being so. Horses parade and run races whether there are a few hundred people watching them or thousands. The young hurdler who dances will do so anyway. The “Seen it all before” ‘chaser will continue to go round the ring looking half asleep – until the bell rings. Probably the most curious thing about the day was the lack of cheering towards the finish, which was sometimes pretty hard to suppress.

Spectators had been asked not to cheer – and didn’t, even though a couple of finishes were very exciting, and the form was shaken up as when the Glenfarclas went to the 18:1 Some Neck, just holding off the 18:1 Defi des Carres. It was fun to see one of Kim Bailey’s horses (HappyGoLucky) justifying favouritism to win in the 2nd, particularly with David Bass up, after that nasty fall earlier this year. It seemed to me that spectators and officials were all behaving as requested but enjoying themselves as well.

It was probably one of the safest places in England to be!"

To find out more about our Cheltenham and South West Syndicate, click here. Membership is available to buy online today, or call Hannah on 07790 356820 to enquire.