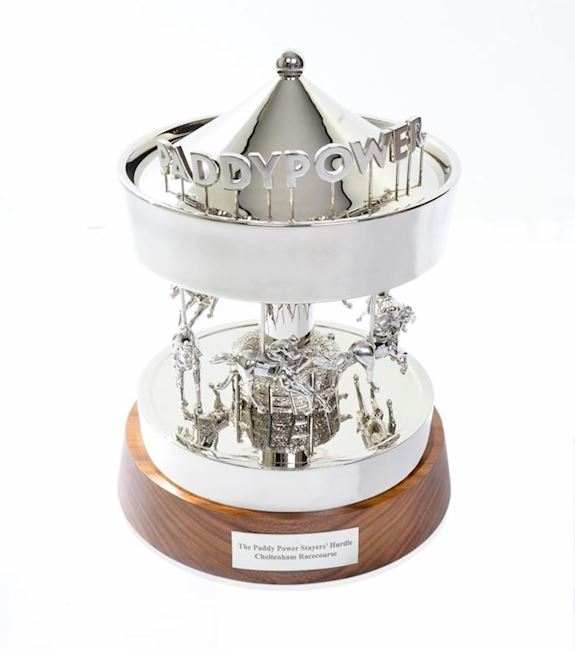 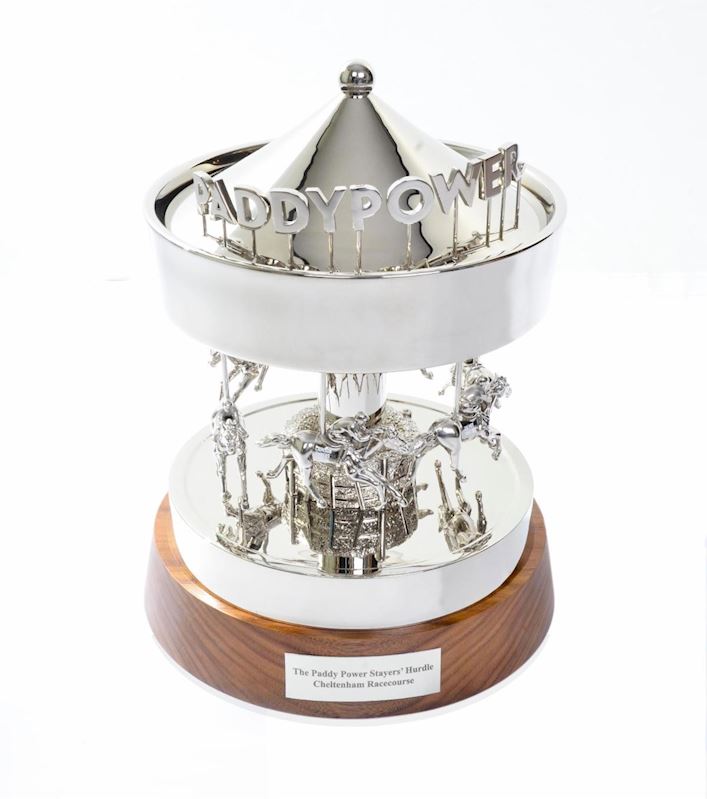 The trophy design was conceived in-house by Paddy Power staff and created by Designworks in Windsor, previously known for their work on the 2018 Commonwealth Games batons.

To view a video of the trophy, please click here: https://we.tl/t-IvL2ZSBf4w

The trophy which the winning owner gets to keep will be smaller and feature four of the horses mentioned above -  Big Buck's, Inglis Drever, Baracouda and Galmoy.

In the event of Paisley Park repeating his 2019 success in the race, a special braille plaque will be added to the trophy in tribute to owner Andrew Gemmell who has been blind since birth. Paisley Park, who is the 4/6 favourite with Paddy Power to repeat his 2019 success, was today revealed as one of 18 horses going forward for the 2020 Paddy Power Stayers' Hurdle.

Details of the six horses featured on the perpetual trophy:

1 Big Buck's - The only four-time winner of the Stayers' Hurdle. Owned by the Stewart Family and trained by Paul Nicholls, Big Buck's reverted to hurdling after unseating Sam Thomas at the last in the 2008 Hennessy Gold Cup. He never looked back after his return to hurdling, with his four Stayers' Hurdle successes forming the centrepiece of an 18-race unbeaten stretch between January, 2009 and December, 2012 - a record at the time. Big Buck's retired with an amazing record of 20 wins over hurdles and over £1.3 million in prize money.

2 Inglis Drever - A very useful novice, who narrowly went down in what is now the Ballymore Novices' Hurdle at The Festival in 2004, Inglis Drever excelled when stepped up to three miles. He had 2002 and 2003 winner Baracouda back in second when scoring for the first time in the Stayers' Hurdle in 2005 and, after missing the 2006 running, came back as strongly as ever with characteristic gutsy victories in 2007 and 2008. Owned by Andrea & Graham Wylie, Inglis Drever was trained by Howard Johnson and was partnered by three different jockeys for his three Stayers' Hurdle wins - Graham Lee (2005), Paddy Brennan (2007) and Denis O'Regan (2008).

3 Baracouda - The best staying hurdler to come out of France, Baracouda burst on to the scene in Britain when scoring in the Long Walk Hurdle at Ascot at the end of 2000. Subsequently purchased by J P McManus, he had to wait until 2002 to go to The Festival due to foot and mouth but made no mistake when finally reaching Prestbury Park with victories in 2002 and 2003. He was also runner-up in 2004 and 2005. Trained by Francois Doumen, he was ridden by the trainer's son Thierry for his two successes.

4 Galmoy - The 1980s were a lean time for Irish raiders at The Festival but if one horse kept the flame burning it was the great Galmoy. Trained by the charismatic John Mulhern, Galmoy was partnered to successes in the 1987 & 1988 Stayers' Hurdle by Tommy Carmody, providing Ireland with its sole success at The Festival in those two years. He was a gallant second to Rustle when attempting the hat-trick in 1989 and stayed on strongly up the hill to finish a gallant fifth as a 12-year-old on his final Festival appearance in 1991.

5 Crimson Embers - Crimson Embers' two wins were stretched over a four-year period. He first won in 1982 as a seven-year-old and again four years' later in 1986 as an 11-year-old, when he provided trainer Fulke Walwyn with his 40th and final Festival success. He was ridden by Stuart Shilston for both victories. It might well have been three wins for Crimson Embers - in 1985 he finished second after suffering clear interference on the run-in from winner Rose Ravine. However, no stewards' enquiry was called and there was no objection lodged, due to the fact that Rose Ravine was also owned by Sally Smart and trained by Fulke Walwyn.

6 Silver Bay - Although the Stayers' Hurdle was only run for the first time under its present race conditions in 1972, Silver Bay was the first horse to land its predecessor contest twice, with wins in 1913 and 1914.

To view a close-up video of the trophy, please click here: https://we.tl/t-iBDpmvSw9N

All-time leading Cheltenham jockey Ruby Walsh was brought in during the design process to advise on correct jockey posture and position, and the horses were modelled using the latest 3D printing technology before being cast in nickel. Each of the jockey models have been hand-finished.

The six horses rotate around a central pillar based around a traditional Cheltenham Hurdle, and rise and fall to the sound of "You are my sunshine".

Paul Mallon, Paddy Power's head of brand marketing for horse racing and Ireland, said: "Paddy Power is delighted to be sponsoring at The Festival for the first time in 2020 and what better to celebrate that fact than with this wonderful new trophy for the Paddy Power Stayers' Hurdle.

"The trophy is innovative in its design by being both moving and musical while it also celebrates the rich heritage of the race by featuring six of its best winners.

"I extend my best wishes to connections of all contenders for the 2020 Paddy Power Stayers' Hurdle and am sure we will have a very worthy winner next Thursday."

Carey Weeks, regional head of partnerships for Jockey Club Racecourses South West, added: "Since re-joining the sponsorship fold at Cheltenham in 2020, the enthusiasm shown by Paddy Power has been tremendous.

"This innovative new trophy for the Paddy Power Stayers' Hurdle is one example of how Paddy Power has wholeheartedly thrown its support into its flagship sponsorship at The Festival.

"The successful owner next Thursday is going have an outstanding memento of their victory."

More information is available at www.cheltenham.co.uk and through: